I wish we could do this with creationists. A German court has ruled that a kook skeptic must pay up on his €100,000 challenge to prove measles was a virus.

A court in Germany has ruled that a prominent anti-vaccination advocate must pay a doctor the €100,000 prize money he had promised to anyone who could prove measles is a virus.

Biologist Stefan Lanka made the offer on his website (pdf) in 2011, but rejected the six scientific studies Dr David Bardens provided as proof.

Lanka argued during the Ravensburg district court hearing that measles was a psychosomatic illness, the local Suedkurier newspaper reported.

Bizarre. Erupting in painful, itching pustules and even dying are now psychosomatic illnesses? All I can say is…here is an electron micrograph of measles virus particles being spewed from the surface of an infected cell. 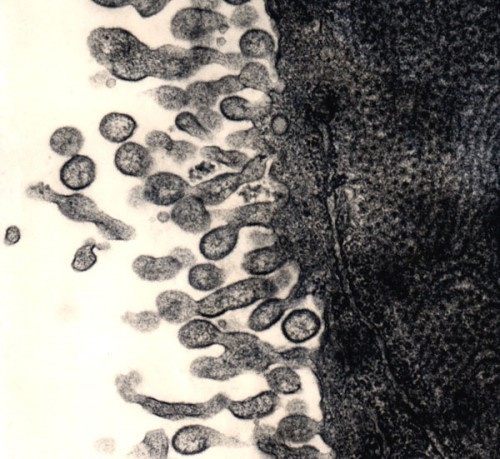 But now I’m thinking of all those people who have offered creationist challenges — Kent Hovind’s $250,000, Joseph Mastropaolo’s $10,000, Chopra’s million — and wishing we had a court capable of recognizing the scientific evidence for evolution and telling them to make good on their promises.

I get free offers in email » « Mars One is a scam