His trial on charges that he’s been willfully trying to interfere with the forfeiture of his properties (which was part of his sentence) started this week. The Pensacola News Journal has an account. Not much has happened yet, and they’re expecting two weeks of proceedings.

Thomas Keith, Hovind’s attorney, essentially told jurors his client’s current charges were the result of him lawfully disagreeing with the powers that be.

"He has the truest belief that he was wrongfully sentenced and convicted, and he’s been fighting it, lawfully, in every legal way that he thinks he can… It’s not illegal to file motions in court, and that’s what he’s doing."

Hovind doesn’t have the look of a fighter. He was calm and detached Monday, leaning back in his chair as he watched the court proceedings through the thick-rimmed glasses on graying his temples. However, to a certain subset of the populace, Hovind has become a folk hero of sorts for his willingness to rail against the establishment. A young Earth creationist, Hovind’s claim to fame has been attempting to poke holes in popularly-accepted notions such as evolution and an "old Earth."

It came as no surprise that he has been trying to poke holes in the legal process, though his success has been questionable. The grounds for many of Hovind’s legal actions reportedly came from a cellmate in a New Hampshire prison camp whom allegedly Hovind described as a "legal genius."

Well, gosh, at least he’s getting the legal advice he deserves.

But really, he’s getting up there in years, he’s been in prison for about ten years, maybe he should stop screwing around with these jailhouse lawyers and bizarre legal cranks, get some legitimate representation, and show a little acceptance of his punishment just to get out and get home.

This “Better Call Saul” nonsense is not helping himself.

Assistant U.S. Attorney Tiffany Eggers read transcripts of a phone call from Hovind to his daughter in which Hovind reportedly discussed his lis pendes.

"Have you ever taken a step into dog crap and it gets stuck on your feet and it’s really hard to get off?" he reportedly asked. "That’s what a lis pendes is."

Um, that should be “lis pendens”. It’s what he’s charged with doing: he has been filing these notices claiming ownership of his former properties, creating bureaucratic road blocks to their forfeiture. That phone call sounds like a confession: he’s been filing these claims just to create a nuisance.

The government is tasked with proving Hansen and Hovind acted with the knowledge they were committing illegal actions, according to Keith. He said the fact that most of Hovind’s resistance was mounted through public documents and often recounted on Hovind’s blog was evidence the evangelist believed his actions were legal and permissible. Klotz concurred on his client’s behalf..

"There is a mountain of evidence, but I expect you’re not going to find one shred of evidence that Mr. Hansen acted with the intent to defraud anybody, or take anything that didn’t belong to them, or deny the government of the $430,400 it was owed," Klotz said. "He just did what he thought he had to as a trustee."

The trial is expected to continue at the federal courthouse in Pensacola during the next two weeks. Chief District Judge M. Casey Rodgers is presiding.

I also don’t think his popular defenders are helping his case. This guy is at the trial: 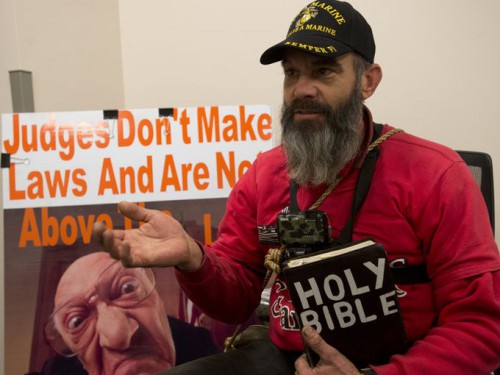 Even if the judge is a great big jerk, you don’t bring a colorful sign to the courthouse and taunt the judge. He seems to be all about the obnoxious displays, though: I notice that his Bible wasn’t ostentatious enough for him, so he had to crudely tape on big letters that say “HOLY BIBLE”. That isn’t for his benefit, that’s entirely to announce to the world that he carries around a “HOLY BIBLE”.

Botanical Wednesday: It’s been a long time if I’m missing Oplopanax horridus » « Maybe if they talked about the existence of stars…?