Now you can learn everything you need to know about octopus sex. It’s a bit tangly: 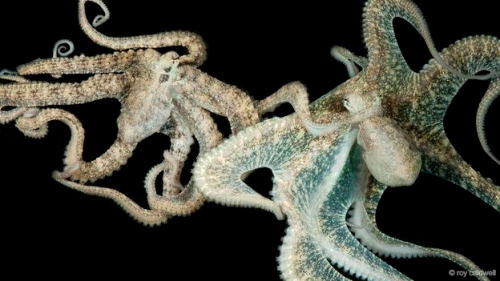 But just in case you got lost in all the tentacles, here’s a diagram to help you out. By the way, in case you’ve ever wondered where an octopus keeps its nads, they’re maybe not where you expected.

In one instance, she and her colleagues observed two day octopuses mating on a reef in Indonesia. After about 15 minutes of copulation, the female lunged and wrapped two arms around the male’s bulbous body, his mantle. A few minutes later, the male was motionless. The female then carried the corpse to her den, where he presumably became dinner.

In another instance, researchers watched a large female day octopus off the coast of Micronesia. A small male mated with her a dozen times. But then the male went in for a 13th mating session, and the female turned on him. She strangled him and took him back to her den to feed on over the course of the next two days.

So octopuses are all feminists, then?

Next, they ought to ban everyone who has eaten shellfish or wears mixed fabrics » « Leonard Nimoy has died