This person was very anxious to contact me and get a reply, and sent me a couple of messages on twitter and in email. I gave him a shot. I shouldn’t have bothered.

My name is JC, and I’m a philosopher. I’m working on a project with Richard Carrier at the moment (the project ‘666’)

and I wish to speak to you about atheism plus.

Why? I am not an organizer for Atheism+, nor do I play an active role in it. I support their cause. That’s about it.

It’s just gotten really weird here. I also support the goals of the Freedom from Religion Foundation and the Nature Conservancy, but no one writes to me asking me to explain and defend their policies; no one is confused and thinks that maybe I’m the president of the Audobon Society or American Atheists, but somehow I get collared all the time as the head honcho of Atheism+.

Write to them. They have a forum, and it’s open to the public.

You want a discussion, but it’s not a promising beginning that you are so grossly uninformed.

As far as I’m concerned, (and I have illustrated this here www.anti-theism.co.uk/politics.html ) you and your group are nothing more than over zealous feminists,

No. Atheism+ has many other concerns besides feminism — they are atheists who are interested in progressive social causes.

And “over zealous feminists”…there’s nothing over-zealous here. That you would think so leads me to think that the problem, instead, is that you’re a zealous anti-feminist.

swallowed by the agenda of the ‘new’ feminists and
lost in that part of the argument, though I believe you have a lot to offer.

What, pray tell, is that agenda? Again, it’s rather obvious that you come bearing quite a load of prejudices, biases so deeply ingrained that you don’t even think you need to state them.

The split between ‘atheism’ > philosophically nihilist if it follows science, and atheism plus > pracitically (possibly) better though
principly dry, confuses me as you have a lot of smart constituents (including you and Carrier) that ignore the philosophy.

That was completely incoherent, and I have no idea what you’re talking about.

I have a daughter, it’s important that I understand fully. Would it be a waste of your time to edify my confusion, if you can?

You’re talking to the wrong person here. You don’t need an atheist’s assistance, you need some remedial feminism, because you clearly don’t know what you’re talking about.

He sent me a follow-up. I guess he was impatient for a reply.

After reading your post that you linked to, I’d have to say all the evidence suggests that you’re both vindictive and dishonest, and to that I’ll add deeply ignorant.

Now this is getting really annoying. He was pestering me on twitter, saying he couldn’t get an email through; I temporarily followed him so he could private message me, and all he did there was tell me to check my email, that he had something to say that he couldn’t fit into 140 characters, so I unfollowed him. Then checked my email to find the above short sloppy message.

Then I went out to the grocery store. We were out of toilet paper.

Now he’s quite irate that I didn’t respond to him instantly, and is telling people to retweet his demands until I reply. 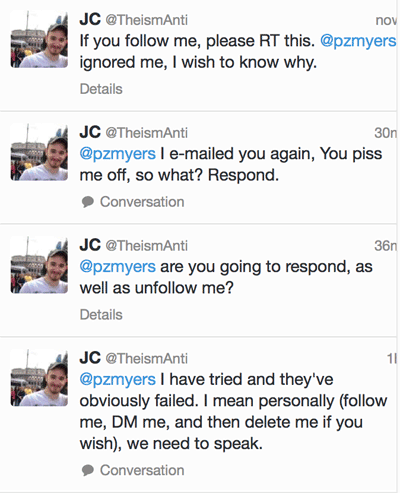 Not a friend of mine. Someone who bought a chapter of mine for an anthology over a year ago (and that’s it; we aren’t “working on a project together” except in the rather droll sense that he is putting a chapter I wrote years ago into a book he is editing; I also have never heard of him being a “philosopher” in any formal sense–he has never stated any qualifications to me).

He only started talking shit about this long after we’d signed the contract (in fact, after I delivered the product, for which I still have not been paid, although I’m not expected to be until the book publishes). I told him to knock it off until our contract is completed and we are no longer in a business relationship. Then I was going to instruct him on his stupidity. But evidently he couldn’t wait and just went full assclown instead (and on you, I guess, since being a professional, I wouldn’t play; obviously he’s not big on being professional himself).

Makayla Sault, killed by religion and gullibility » « “I must take a position that is neither safe, nor politic, nor popular; but I must take it because it is right.”