This is ugly, and it pains me to spread these lies further, but I see it as the only way to expose them. This is a post on facebook that is all about me — it was apparently made in retaliation for me pointing out to Michael Nugent that his blog is a haven for slymepit scum, so one of those scum had to vent his fury.

I think the vindictive nature of this nonsense, and the absurdity of the lies he is spreading, will be obvious.

If I were a litigious person (I’m not, they’re safe), I’d find the implication by an MD that I acquired gonorrhea at a conference actionable…but this is, of course, a slymepit MD, so she has no credibility. All the rest is likewise nonsense.

As for my suggestion that Nugent is fostering some rather wretched characters, this same Cavanaugh person is frequently commenting there, and here’s his latest. Brace yourself for some nuclear-grade irony.

Truly, Myers’ latest baseless accusation is his most reckless. Still, it is but a matter of degree. For years now, Myers’, et al. have straw-manned their opponents’ positions, and by extension, morals.

Yep, that’s a comment from someone who has provided the most densely dishonest characterization of myself ever, wrong in every word, and accuses me of picking up venereal diseases at conferences. 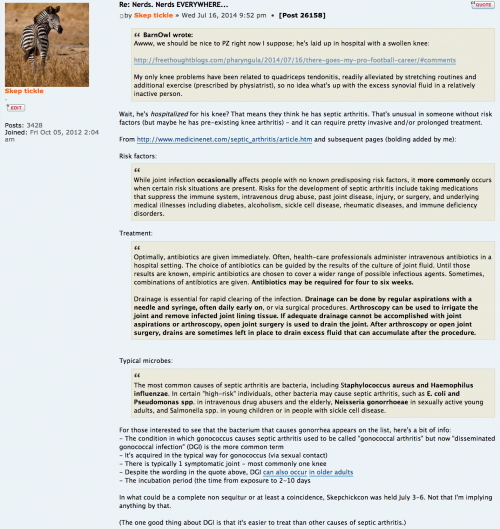 (click for larger image, if you can stomach it)

Jennifer Lawrence is pissed off » « Officer Friendly has gone rabid