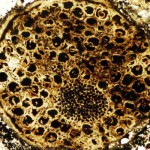 Creationists are much vested in the idea of “suddenly” — they love the idea of inserting the fingersnap of God into every abrupt transition. This is why they are infatuated with the Big Bang and the Cambrian Explosion, and why they flirted with the idea of renaming “Intelligent Design” to “Sudden Origins” theory. If something had no antecedents, no gradual build up, well then, we have to explain it with “God did it!”.

Unfortunately, the media plays along with it. I found a bit of scientific misinformation on the Raw Story — such obvious stupidity that anyone with any basic training in evolutionary biology would have caught it. I just gave my first year biology students an exam, and they would have caught it (I hope). Multicellular life did not arise in the Cambrian — it’s much older than that.

Here’s the story. A fossil of a multicellular organism was found, and…here comes the hype.

For those involved in and interested in the history of life and its evolution- including the inception of multicellular eukaryotes(organism with cells) – Virginia Tech released some very exciting news recently.

According to research conducted by Shuhai Xiao, a Virginia tech professor of geobiology, in conjunction with partners from the Chinese Academy of Sciences, there is new evidence that indicates complex multicellularity (plant and animal life) actually appeared about 60 million years before previous information had indicated. The study found three unusual fossils that show that multicellular organisms may have appeared 600 million years ago and not in the Cambrian Explosion as was previously thought.

No one with any knowledge of the field thought that multicellular organisms arose in the Cambrian. NO ONE. Multicellularity has evolved multiple times — I’ve seen estimates of 50 independent origins — and there are some fossils of multicellular alga that are over 3 billion years old.

The molecular evidence also points to a much older origin. The last common ancestor of arthropods and chordates, for instance, was a multicellular animal that I learned way back in the 80’s probably lived about 700 million years ago; I’ve seen other molecular analyses that propose dates over a billion years ago instead. The point is that in the last 40 or so years of my career, everyone has known that multicellularity is old, old, old, and that it precedes the Ediacaran.

The only reason that we see stories otherwise is a lot of ignorance and confusion injected into the popular press by the uninformed and the ideologically twisted creationists. So this might be a very nice and interesting fossil — we should always welcome new data from the Ediacaran period — but it ain’t surprising at all, and it should fit in well with all of our other evidence. The large animal forms of the Cambrian had antecedents that evolved over hundreds of millions of years, and no one is at all impressed by another tiny piece of evidence that confirms that well-established fact.

Oh, and Raw Story needs a scientist to vet their science reports.

The Twitter Creationist Time Machine! » « You know what I think of cats