Michael Shermer indulges in some shabby Libertarian statistical games to wave away American economic inequality. Sure, there are inequities, he argues, but they’re not so bad — the poor are also getting slightly richer.

The rich are getting richer, as Brookings Institution economist Gary Burtless found by analyzing tax data from the Congressional Budget Office for after-tax income trends from 1979 through 2010 (including government assistance). The top-fifth income earners in the U.S. increased their share of the national income from 43 percent in 1979 to 48 percent in 2010, and the top 1 percent increased their share of the pie from 8 percent in 1979 to 13 percent in 2010. But note what has not happened: the rest have not gotten poorer. They’ve gotten richer: the income of the other quintiles increased by 49, 37, 36 and 45 percent, respectively.

I have a few problems with this. First, in an article titled “The Myth of Income Inequality”, he’s doing a bit of bait-and-switch: it doesn’t matter if the baseline is rising, the question is about the disparity. Income disparity is greater now than it was before. His own numbers show that.

This argument is basically a version of the “Well, the poor all have cell phones!” dismissal. They’ve also got refrigerators and TVs, therefore, you should just ignore the fact that the wealthiest are sucking up all our prosperity to fund luxuries and frivolities. We should just pretend that we’re all getting the benefit of a rising tide, and never mind that yacht towering above your dinghy.

But there are other funny things going on in this economy. Look at this chart: the costs of TVs and toys and cell phones (the latter at least is essential now; but it’s a new cost for the poor, even if it is dropping) are plummeting, but the stuff that really matters for upward income mobility, like child care, health care, and education are going up. Especially education. We are saddling new graduates with overwhelming amounts of debt. 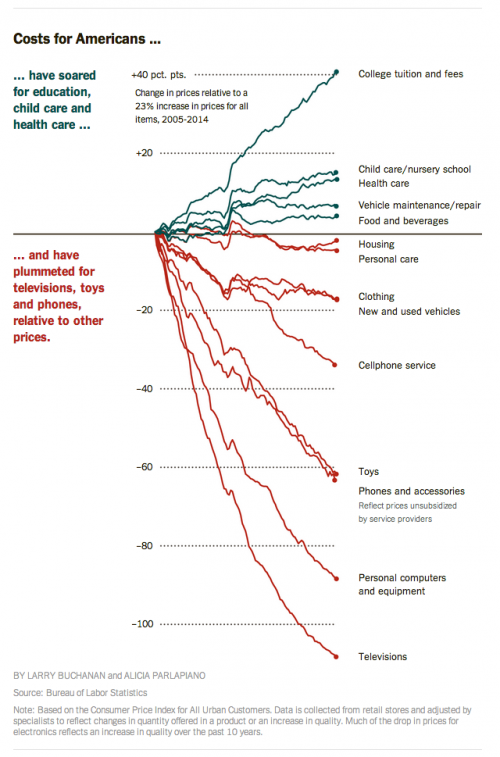 Another interesting game Shermer plays is to ignore the difference between income and wealth. It’s good that the poor are getting some increase in income, but if you’re using it to make ends meet or dig out from under a pile of debt, you’re not going to be accumulating any wealth — you can still get poorer. Meanwhile, the rich don’t have to worry about covering essential living expenses, and can invest and get richer. It’s useful to be able to see the distinction, so here’s a handy table of wealth and income in the US.

Income, net worth, and financial worth in the U.S. by percentile,
From Wolff (2012); only mean figures are available, not medians.  Note that income and wealth are separate measures; so, for example, the top 1% of income-earners is not exactly the same group of people as the top 1% of wealth-holders, although there is considerable overlap.

Here’s another sneaky trick. When the concern is inequality, let’s ignore the most extreme and instead focus on perceptions.

One reason for the controversy is that people overestimate differences between the rich and poor. In a 2013 study published in Psychological Science entitled “Better Off Than We Know,” St. Louis University psychologist John R. Chambers and his colleagues found that most people estimate that the richest 20 percent make 31 times more than the poorest 20 percent (it is 15.5 times), and they believe that the average annual income of the richest 20 percent of Americans is $2 million, whereas in fact it is $169,000, a perceptual difference of nearly 12 times. “Almost all of our study participants,” the authors concluded, “grossly underestimated Americans’ average household incomes and overestimated the level of income inequality.”

That’s beautiful sleight of hand. First, as previously mentioned, talk only about income, not wealth (and most of us already have poor intuition about the difference; notice also that if you look at the table above, the guesses pretty much hit the mark on wealth, rather than income). Then talk only about the top 20%, rather than the top 1%. And then make much of the fact that people’s guesses about rich people’s incomes are wrong. Har har, the proles guessed that managers make 31 times as much money as they do, when it’s really only 12 times.

Really? Try this exercise: imagine that you got paid just 10 times as much as you do now. “Just” 10 times. How much of a difference would that make in your life? I’m in a comfortable position; optimistically, I’m probably somewhere in the bottom of the 20%, so I don’t have to worry much about making ends meet, and give me an order of magnitude more money and I’d just be socking it away in a bank. But if you’re poor, if you’re struggling to cover child care and rent and keep the family fed, that’s an immense difference.

And of course the other factor is that the 20% aren’t actually working any harder than the 80% — their labor may require more training (which we’re trying hard to lock poor people out of with skyrocketing education costs), but they’re not actually working any harder than you are. My father was often working two jobs in order to keep spinning his wheels in poverty, so I’ve seen this inequality at work, and am well aware that I’m on the lucky side of the rich-poor divide.

But set aside all the squinty-eyed statistical games, and simply ask the fundamental question: Who owns the country? Where is the product of 315 million people’s labor going?

In the United States, wealth is highly concentrated in a relatively few hands. As of 2010, the top 1% of households (the upper class) owned 35.4% of all privately held wealth, and the next 19% (the managerial, professional, and small business stratum) had 53.5%, which means that just 20% of the people owned a remarkable 89%, leaving only 11% of the wealth for the bottom 80% (wage and salary workers). In terms of financial wealth (total net worth minus the value of one’s home), the top 1% of households had an even greater share: 42.1%.

That’s the inequality that we’re concerned about, that a mere 1% own well over a third of the wealth of the country, and it’s increasing — they use that wealth to manipulate media and politics to steal even greater quantities of our work. We are becoming a kleptocracy.

But never mind that. Look! Over there! There’s a poor person with an Xbox!

But wait! Even that claim that the poor have gotten richer may be dodgy: this analysis of reported incomes shows that we’ve been experiencing a decline.

They know » « Maybe humanity deserves extinction, after all