Charleston Southern University has fired Professor Paul Roof for allowing his face to appear on a beer bottle.

"They said that this was not an image for the Christian environment and that it may seem to students that I am endorsing the use of alcohol," says Roof, who taught at the university for seven years and also founded the social club Holy City Beard & Moustache Society. HCBMS hosts beard and mustache competitions as charity fundraisers for ovarian cancer patients and their families. 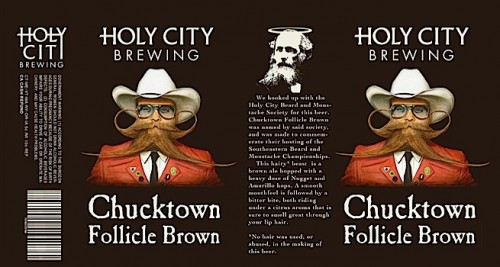 If all Christians were that stylish, we atheists would have to worry that religion was becoming cool again. I usually keep my beard fairly closely trimmed, but Roof is making me think I have to try harder if I’m going to compete.

But nah, I don’t have to worry. When Christian schools are firing decent human beings over facial hair and beer, and when their commenters are saying things like this:

I’m very proud of CSU. I have children, and I would certainly consider CSU a college for them, based on CSU’s principles. Not enough people stand up to the bullies of the leftwing radicals.
From the disbanding of Gender Stiudies at USC-U and the funding-pull for homosexual propaganda at CofC, decent and moral people are fighting back.
Good for you CSU. We’re supporting you. Thank you for representing us.

I get to sit back and coast on my relatively feeble beard and once-a-month glass of beer.

The one good thing Ronald Reagan did » « Trolls, there is a purpose to your life at last