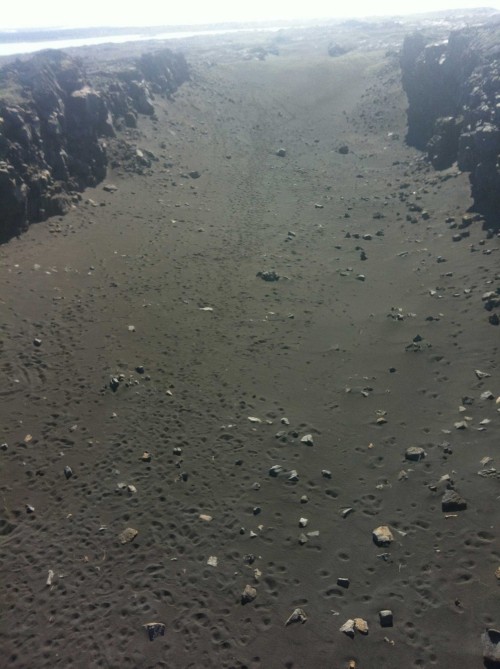 Another fascinating thing about it is that it’s growing. These plates are slowly drifting apart, and we expect the Atlantic Ocean to grow larger in the coming millions of years. This is not a bad thing or a good thing, it’s just what is.

You can see a growing rift right now: just look at the atheist movement. In particular, one really good marker right now is to look at Melody Hensley. Melody has been a vigorous activist for CFI, organizing many meetings in the Washington DC area, and in particular acting as the driving force behind the impressive Women in Secularism meetings. If there are real Brave Heroes in this movement, she’s one of them. I’m on Melody’s side of the rift.

On the other side…well, a mob of shrill nobodies, who don’t seem to do anything for the movement at all, but are really good at non-stop whining and lying. They are entitled shits who get furious if you block them on twitter or ban them from your personal blogs, but mainly seem to be involved in pursuing vicious vendettas against feminism, social justice, or anyone who dares to suggest that atheists ought to be doing more than just chanting that god is dead.

I am not on their side. I’m actually wishing we had a nearby subduction zone so they’d get sucked down into a more appropriate region.

Their latest cause célèbre is to howl in rage because Melody has been diagnosed (by a professional, not some ignoramus on Twitter) with post-traumatic stress disorder, PTSD, as a consequence of years of harassment and bullying. This is a legitimate diagnosis: years of watching crime dramas on TV may have given you the impression that PTSD only affects soldiers in war zones, but real psychologists and real doctors will tell you otherwise: all kinds of prolonged stressors can produce PTSD symptoms. So if you’re one of the idiots ranting that you can’t get PTSD from bullying/stalking/harassment, you’re on the other side of the rift from me, and you’re also factually wrong. Which is amazing, considering that atheists should be putting a very high premium on following the evidence.

Then the other response is that if Melody can get PTSD from ‘mere’ online bullying, then she is demeaning the experience of soldiers who get PTSD from bombs going off near them— you know, ‘legitimate’ PTSD. This is absurd. They’re trying to rank degrees of trauma? That doesn’t discredit the fact that they’re all trauma. Someone saying they’ve got PTSD from source X is not an attack on someone getting PTSD from source Y. It’s painful to watch: it’s as if someone said they had prostate cancer, and instead of sympathy and help, they got accused of belittling breast cancer patients, because that’s a real cancer…and then someone starts tearing into those people because saying that breast cancer is a serious disease is equivalent to shitting all over pancreatic cancer patients. No, it’s not. They’re all bad. It’s a group of outsiders trying to establish a hierarchy of suffering solely so they can disparage one group. It’s dishonest and despicable.

And now, of course, their real agenda is becoming apparent: the Melody-haters who also reject the medical facts are finding common cause with misogynists and the usual incoherent ranters of the inappropriately named Men’s Rights Movement are are upset that mere rape and death threats against a woman might be wrong. It’s clear that the reason for all the bullying isn’t that Melody is weak, or lying, or oppressing people, because she isn’t — it’s because she’s a prominent, strong activist fighting for better representation of women in atheism and skepticism. That is her crime. And so those people on the other side of the rift will hound her to oppress and silence her.

Here I stand, on my side. Not only will I take pride in my choice, but if you try to tell me that I somehow have to heal this rift, I’ll ask you…”WHY?”

Right-wing lies flourish on their propaganda organs » « What is it about the word "choice" that you don’t understand?