I was rather surprised yesterday to see so much negative reaction to my statement that there’s more to evolution than selection, and that random, not selective, changes dominate our history. It was in the context of what should be taught in our public schools, and I almost bought the line that we can only teach a simplified version of evolution in grade school, but then it sunk in that I was talking to a group of adults about the standard biological perspective, and their reactions were a mix of total bafflement, indignant rejection, and strange evasive waffling. Well, when should we talk about this stuff, then? Do I have to start making day trips to the local nursing home? Or maybe we should be honest from the very beginning about the complexity of modern evolutionary theory and how it has grown to be very different from what Darwin knew.

First thing you have to know: the revolution is over. Neutral and nearly neutral theory won. The neutral theory states that most of the variation found in evolutionary lineages is a product of random genetic drift. Nearly neutral theory is an expansion of that idea that basically says that even slightly advantageous or deleterious mutations will escape selection — they’ll be overwhelmed by effects dependent on population size. This does not in any way imply that selection is unimportant, but only that most molecular differences will not be a product of adaptive, selective changes.

These theories describe different patterns of the distribution of mutations in populations. This diagram from Bromham & Penny (2003) will help you see the difference. 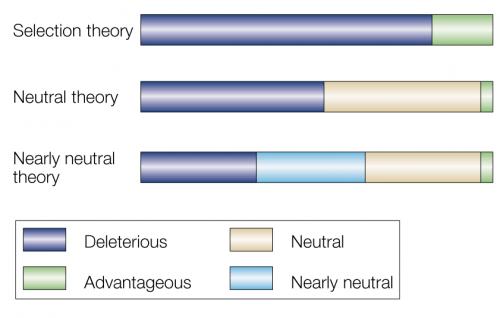 Selectionist, neutral and nearly neutral theories. a | Selectionist theory: early neo-Darwinian theories assumed that all mutations would affect fitness and, therefore, would be advantageous or deleterious, but not neutral. b | Neutral theory: the neutral theory considered that, for most proteins, neutral mutations exceeded those that were advantageous, but that differences in the relative proportions of neutral sites would influence the rate of molecular evolution (that is, more neutral sites would produce a faster overall rate of change). c | Nearly neutral theory: the fate of mutations with only slight positive or negative effect on fitness will depend on how population size affects the outcome.

The purple bars are mutations subject to purifying selection — that is, deleterious mutations that are culled from the population. The green bars are mutations subject to positive selection, that confer some advantage to the individual carrying them. That’s all people thought you would have under old school versions of evolution: every change would have some effect on the individual, and would be subject to selection (and then, of course, smart people started to wonder about genetic load and realizing that there were limitations to how much selection a population could tolerate).

Kimura and Ohta proposed, though, that many mutations would be neutral — that is, changes to the sequence of a gene or the protein would have no effect on fitness, and would be effectively neutral. Since the genetic code is degenerate, with most amino acids coded for by more than one triplet, you could have synonymous changes to the DNA that would produce proteins with identical amino acid sequences. Further, protein structure and function may not be as precisely dependent on specific amino acid sequences as many people assume: there are key regulatory and active sites within proteins that are extremely sensitive to small amino acid changes, but other parts of the protein may be much more fault tolerant. That means that under neutral theory, we have to recognize that beige bar, which are mutations that have no effect on fitness.

Under nearly neutral theory, the domain of selection effects shrunk further, because it was realized that quantitatively, small deleterious and advantageous mutations, that is mutations that only conferred a slight difference in reproductive success, would be invisible against a noisy background of chance variation, and therefore could not be seen by selection. That’s the blue bar; mutations that we can see might cause a slight change to the efficiency of an enzyme, for instance, but are not significant enough to cause any difference in reproductive success, or are either lost or fixed by chance.

Now you might try to salvage your faith in the ultimate power of selection by suggesting that the neutral and nearly neutral mutations are really rare and can thus be ignored as negligible, therefore returning us to the world of selection theory…with just a little fuzzy slop around the boundary between the green and blue bars. That’s untenable, though. We have molecular clocks.

When comparing the rates of change between homologous genes in different species, we had a bit of a surprise: they are very roughly, sloppily constant. That shouldn’t be true under pure selection theory, but it turns out to make a lot of sense under nearly neutral theory. There is a tradeoff in the rate of mutations occurring, and in becoming fixed in a population. A very large population size will accumulate more mutations purely by chance, but the probability of a single mutation becoming fixed in the population is reduced under large population sizes. When you do the math, you discover that population size cancels out, and the frequency of novel forms becoming fixed over time is dependent solely on the mutation rate.

Think about that. If you compare two species, the number of nucleotide differences between them is basically going to be simply the mutation rate times the number of generations separating them from their last common ancestor. That’s how we can use a molecular clock to date the time of divergence of two lineages.

Please note: this does not deny that the selection shapes specific traits in a species occurs — we do undergo evolutionary adaptation! It merely says that most of the genetic changes are random. We have to use specific analysis techniques, like the McDonald/Kreitman test, to detect the signature of selection out of the background noise of mutation.

This is just one example of an important concept that is overlooked when your education in evolution focuses solely on one simplistic version of the mechanisms of change. If you didn’t know it, it’s not your fault; I graduated from high school never having the ‘evolution’ word uttered even once by a teacher, so if you’ve heard about natural selection, you’re one up on me. But we can do better. That the high school level of instruction in evolutionary biology is stuck at around 1930 is a bug, not a feature, and we should aim to improve it.

I know, it’s hard when a significant part of the population is stuck in the first millennium BCE, but we shouldn’t use that as an excuse to dumb down education.

Now, because I so enjoyed the chaos that ensued after rejecting one small part of the Modern Synthesis, let me share with you something rather cool. It’s a table from Eugene Koonin’s The Logic of Chance, in which he summarizes some of the big changes between the Modern Synthesis that emerged in the era before molecular biology, and how most molecular biologists view evolution today. I expect an even more glorious freakout because he refers to this positively as a postmodern reassessment, and I know how much everyone loves post-modernism.

I would add another significant distinction. Under the modern synthesis, populations are primarily seen as plastic and responsive to changes in the environment, producing species that are most strongly marked by adaptive changes. In the postmodern evolutionary view, history dominates — most of the properties of a species are a contingent product of its ancestors’ attributes. “Everything is the way it is because it got that way.” Everything you see in an organism is a consequence of its history, with the addition of a few unique adaptive fillips, and that has two significant implications: you can’t understand an organism without recognizing the impact of its phylogeny, and the modern form preserves ancestral relationships that can be analyzed to discern that history.

And that, of course, demolishes the bogus distinction between historical and observational science that Ken Ham laughably makes. When I observe a fruit fly or a zebrafish or a human being, I am seeing its history made manifest in its structure. See also John Timmer’s recent post on history and science for more.

Koonin EV (2011) The Logic of Chance: The Nature and Origin of Biological Evolution.

*I’m not going to get into the evidence for quasi-Lamarckian evolution here, but I will say that there is good evidence for some of it: Koonin discusses the CRISPR-Cas system of adaptive immunity in bacteria. Maybe some other time I can write that up.

So that’s where the money on the collection plate goes! » « Both wrong