I’m just curious — did anyone else hear about the big pipeline explosion near Winnipeg? I’m sure that if you lived in southern Manitoba, where thousands were without heat for their homes in January, knew all about it. But I didn’t see much in the news about this terrifying event. 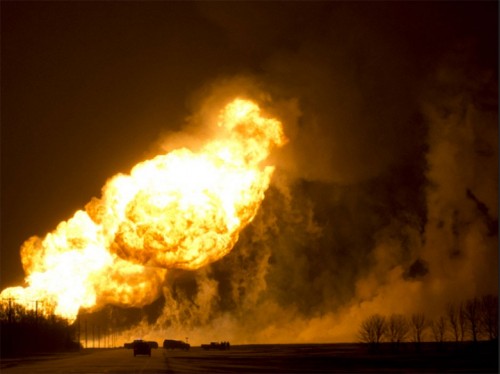 There may be a reason for that. Pipeline explosions aren’t that unusual or newsworthy, I guess.

Carl Weimer, executive director of Pipeline Safety Trust, a non-profit watchdog organization, says that, on average, there is “a significant incident — somewhere — about every other day. And someone ends up in the hospital or dead about every nine or ten days.” This begs the question: are pipelines carrying shale gas different in their explosive potential than other pipelines?

“There isn’t any database that allows you to get at that,” says Richard Kuprewicz, a pipeline safety expert and consultant of 40 years’ experience. “If it’s a steel pipeline and it has enough gas in it under enough pressure, it can leak or rupture.” Many pipelines, says Kuprewicz, aren’t bound by any safety regulations, and even when they are, enforcement can often be lax. Where regulations exist, he continues, corporate compliance is uneven. “Some companies comply with and exceed regulations, others don’t.  If I want to find out about what’s going on, I may [have to] get additional information via subpoena.”

The United States has gone fracking mad — Obama even made a point of mentioning that we’ve become a net oil exporter in his state of the union address, without bothering to say how that happened — but we ought to be concerned. It’s easy to ignore the fact that parts of North Dakota and Canada are being shredded and poisoned and torn apart because nobody lives there (well, nearly: low population density rural areas are fair game for exploitation, because biomes don’t sue), but then they run poorly regulated and maintained pipelines straight to our homes.

Another thing that raises my hackles: they’ve taken to naming these pipelines with words to inspire reverence among the rubes. “Keystone” is sort of neutral, but the article above talks about one called “Constitution”. Are you against the Constitution? What kind of ‘Murican are you? I expect any day now to discover a pipeline proposal called “God & Family” or, let’s go straight to the heart of the matter, the “Jesus Loves America and Hates Terrorists Pipeline”.

OMG, FtBCon2 is happening right now » « Friday Cephalopod: YOU SHALL NOT PASS