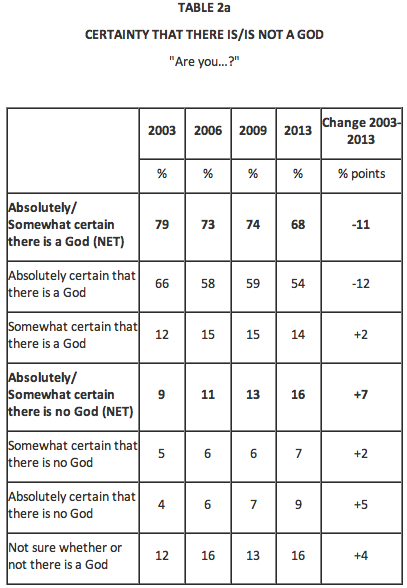 Behold the change between 2003 and 2013: god belief declined 11% in America, while the ranks of the unbelievers swelled by 7%; the agnostics are hesitantly riding our coattails, and they’ve also increased in numbers by 4%.

Cuttlefish also notes the likely cause: the establishment of a publicly accessible font of information on righteous godlessness, Freethoughtblogs. Obviously. I should probably point out that “Support FtB” donation link over there on the left sidebar. Keep us going so we can continue to push back the forces of ignorance.

I suppose there are also a few other organizations, like the FFRF, American Atheists, American Humanists, Americans United, or your local freethinking group that have been making some contribution as well, so it would also be OK if you sent them an end-of-the-year donation in appreciation of their work.

[Lounge #445] » « Removing the cloud of discrimination from conversations about science