Gregory Paul says that Nelson Mandela was an atheist. I’ve looked around a bit, and I can’t find any confirmation of that — I wouldn’t be surprised, but at best I find that he was a committed secularist who avoided coming out clearly about religion. Can anyone confirm? I don’t like it when dead people are immediately brought into the fold of a religion when they can’t deny it, so I’m not keen on atheists doing likewise.

Back in the last decade there was a cable talk show titled Faith Under Fire. Hosted by a right wing Christian, it featured theists and atheists in direct conflict over assorted matters. In one segment a theist challenged a leader of an atheist organization to name a single atheist who had become a great moral leader. To my annoyance the had-not-thought-about-that-one-before atheist was stumped.

A leading example, of course, is Andrei Sakharov. The wholly ungodly leftist physicist started out as the father of the Soviet H-bomb, but became so fed up with dictatorial communism – Khrushchev’s insistence on detonating a colossal 50 megaton thermonuclear device for no practical reason being a factor – that he became the leading dissident against the system, fighting for progressive democracy at considerable expense to himself.

And the other great moral atheist leader of the 20th century was Nelson Mandela. He too was an nontheist of the left (as most are, in the US 3/4s of the nonreligious are progressives, the rest Randian libertarians.)

Now that last bit is interesting. If you’ve been wondering how big the atheist rift is, and are a little tired of vague claims that those jerks are a minority, it at least pins a specific number on them: 25%. Which isn’t small.

The claim is a little overstated, though. They aren’t necessarily Randian libertarians. The basis of that 25% comes from the Pew poll of the “nones”, which found that about a quarter of them were politically conservative. 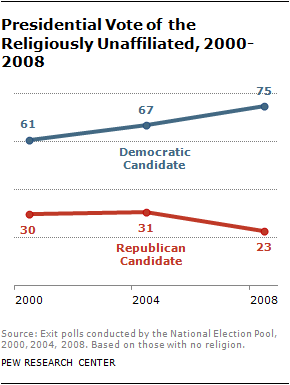 I looked through the whole thing; no sign that they actually assessed the details of political alignment closely enough to recognize libertarians. But yeah, 25% does sound like a reasonable estimate of the fraction of jerks infesting the atheist movement.