Oh, man, I can’t endorse this action by Lakota and Dakota women. I think people have a right to do as they please (as long as it doesn’t harm others) on their private property — that goes for worshipping Jesus or Thor, desecrating Bibles, or even flying Nazi flags. (All bets are off if the Nazi sympathizers in Leith, ND, who were trying to stage a takeover of the local government, were flying that flag as representative of the city.)

So I can’t support seizing the Nazi flag and burning it, if it were someone else’s private property. But I still look at this picture and think…whoa, but they are badass. 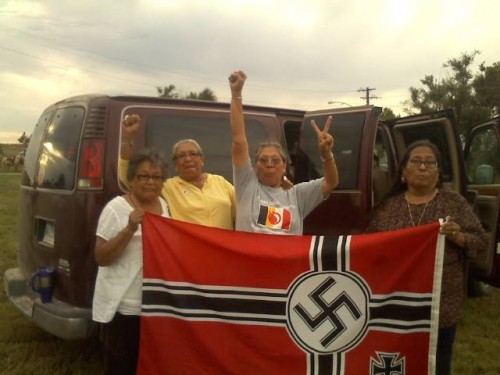 Lakota and Dakota grandmothers captured the Nazi flag hanging in Leith, ND and burned it. Warriors!

The sun still rises in the East… » « There is no contradiction