I’ve been informed that there will be a lecture at UND next Tuesday. I might be able to find time to dart up and come right back home that night…it’s only about a two hour drive. 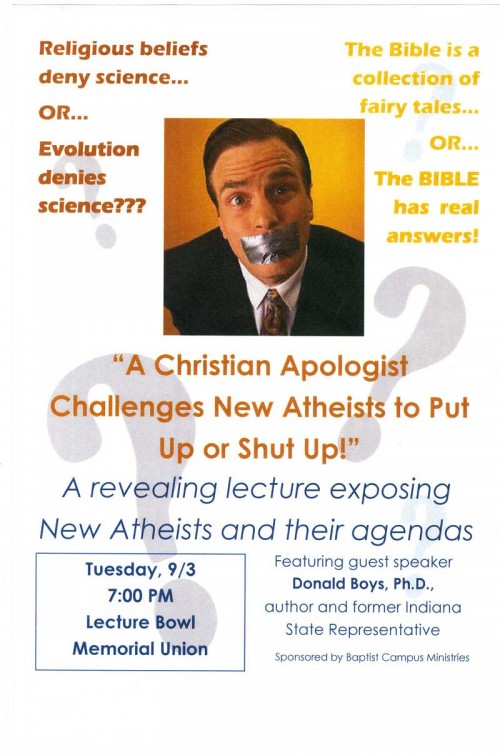 I’ve heard of Boys before. It’s going to be ugly. There he is, not only attacking atheism, but doing so as a young earth creationist who rejects evolution. But also because Boys had his moment of infamy about 5 years ago. Anyone else remember this? He’s the guy who urged Bush to nuke Mecca and Medina.

Do we sit on our fat bottoms, wring our hands, and wait for Muslim terrorists to strike? What good will that do? What good will result in doing nothing until one or two major cities are in rubble? My suggestion is take offensive action. The only possible way I can see that we might, I say might, escape another Muslim attack upon our nation is for President Bush to issue the following declaration to the world:

“My fellow Americans, as your President my primary responsibility is to protect and defend the U.S. I am not interested in world opinion or in playing games at the UN. Our intelligence reveals that Muslim terrorists are planning to hit us again; furthermore, terrorist leaders have promised that our cities will be in ruins. I believe them so I have been authorized by the Congress to make the following promise: Within 24 hours following an attack upon the U.S., our Air Force will bomb Mecca and Medina into the “Stone Age.” Innocent Saudi Arabian civilians will have 24 hours from the attack on us to flee the two cities that will be razed.

“Let no one be deceived as to our motive. We don’t want to harm any person nor do we desire any territory, and there is no reason for anyone to be killed—as long as there is no attack against our nation. This decision was made to protect U.S. citizens; however, if there is a choice between us and them, it will be them who die. Moreover, Muslim leaders will be the ones who pull the trigger on their own people. If Muslim leaders want to destroy their two holy cities, then they will do so by attacking us. We will respond in 24 hours. May God protect and bless America.”

Stupid to the point of evil, that’s Don Boys. And he’s being sponsored by Baptist Campus Ministries, which claims to be bringing “honor and glory to the Lord Jesus Christ through Bible-based thoughts, words, and actions”.

Fuck your honor and glory, Christians.

My New Atheist agenda is to murder fewer people, not more.

[Thunderdome] » « All these rape flavors…