There is a facebook page called The Patriot Nation, and it’s exactly what you’d expect: people raging against an America that isn’t white. And it is on facebook, so hell no, it’s never going to get taken down, even when it lies.

This is how it lies. The photo on the left, below, is the original, of a woman protesting the Trayvon Martin verdict. It didn’t fit the racist narrative of the goddamn Patriot Nation, though, so they had to do a little blatant photoshop tweaking, and produced the faked photo on the right. 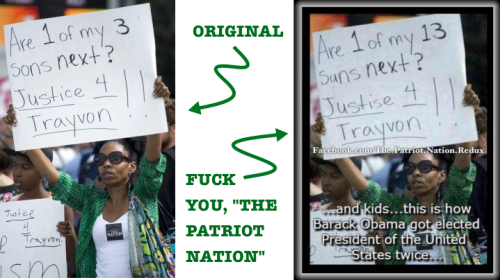 These scum are the people who defile the good name of my country, who make me gag and recoil when someone calls anyone a “patriot”. That woman on the left? I’d be proud to call her my fellow American.