In science, there’s data, and there’s interpretation. It’s really easy to collect data (usually), but interpretation is the hard part — it requires an understanding of context and theory, and an appreciation of the real complexity of the problem. It’s tempting to simplify all your models — the spherical cow problem — but you also have to justify the reduction in complexity to show that it is reasonable. And that’s where some papers blow a hole in their foot. This is particularly a problem when the interpretation of the science is used to argue for policy changes.

Here’s a paper that’s a beautiful example of the split. The data is pretty and clever, the interpretation is shit…and that it goes on to question how to deal with the issue is the toxic icing on top. It’s about women’s menstruation, and how it effects their performance on the job.

This is the first part of the abstract. I don’t disagree with this at all.

In most Western countries illness-related absenteeism is higher among female workers than among male workers. Using the personnel dataset of a large Italian bank, we show that the probability of an absence due to illness increases for females, relative to males, approximately 28 days after a previous illness. This difference disappears for workers age 45 or older. We interpret this as evidence that the menstrual cycle raises female absenteeism. Absences with a 28-day cycle explain a significant fraction of the male-female absenteeism gap.

The interesting exercise in the paper was to see if they could mathematically identify a pattern in the absences. They had a very large data set — the payroll data for 2,965 women and 11,892 men who worked at an Italian bank — and they carried out some simple statistical operations that are familiar to me. I’ve done something similar before; I collected data on the positions of neurons in the spinal cord, and asked whether there was a repeating pattern in their distribution, and whether it was the same distance seen in the pattern of segmental muscle boundaries (it was). This is the same problem! Cool!

So they just asked if there were any periodic regularities in the aggregate absences all of the women working at the bank — not whether there was any synchrony in the absences, but whether if, for example, person A had an absence on her record on one date, what was the likelihood that she’d have another absence at some interval later? When you plot out the data, the signal jumps out at you: women are more likely to have repeating absences at 28 day intervals. 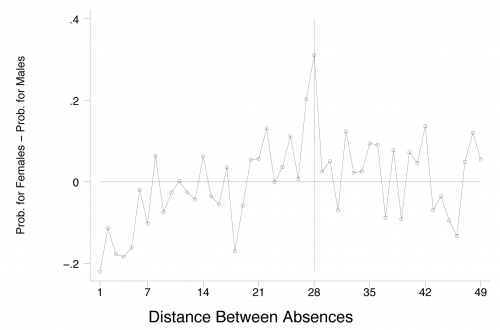 Note that this plot is of women’s absences relative to men’s — this is necessary because I’m sure there were other periodicities in the data that weren’t shown. For instance, the likelihood of someone taking a day off on Friday is higher than taking a day off on Wednesday, because we all like our 3-day weekends, so there ought to be a 7-day periodicity in the chart. But those absences are going to be roughly equally frequent for men or women, so by subtracting the two you get just the differential signal.

The results are totally unsurprising. Many women experience debilitating migraines or nausea at the onset of menstruation, so of course you’re going to see that biological regularity expressed in behavior. The work also found that there was a disappearance of the regularity in post-menopausal women, exactly as expected — it does not address the fact that many women regulate their menstrual cycle with birth control, but then, that information wasn’t in the data set. The authors should be emphasizing that their procedure detected a statistically consistent variation that does not apply to all women; you cannot assess one woman’s performance by pointing to the aggregate data for 3,000 women.

But they do fall for a fallacy. The authors seem to be sucked down into a whirlpool of narrow-mindedness by the prettiness of their numbers. Here’s the rest of their abstract, where they try to interpret their findings, and that’s where I have problems with the paper.

To investigate the effect of absenteeism on earnings, we use a simple signaling model in which employers cannot directly observe workers’ productivity, and therefore use observable characteristics – including absenteeism – to set wages. Since men are absent from work because of health and shirking reasons, while women face an additional exogenous source of health shocks due to menstruation, the signal extraction based on absenteeism is more informative about shirking for males than for females. Consistent with the predictions of the model, we find that the relationship between earnings and absenteeism is more negative for males than for females. Furthermore, this difference declines with seniority, as employers learn more about their workers’ true productivity. Finally, we calculate the earnings cost for women associated with menstruation. We find that higher absenteeism induced by the 28-day cycle explains 11.8 percent of the earnings gender differential.

You should have been put on high alert by the phrase “simple signaling model”. They’re going to argue that wages and promotions are set rationally, by impartial observers looking at just a few simply quantifiable characteristics, like absenteeism. Has anyone in the history of humankind ever worked at a job like that? Punch in, punch out, zoom, you’re climbing the ladder of success and no one ever looks at your work…or the color of your skin or the kind of genitals you keep in your pants…and all decisions might as well be made by a computer.

It’s an excellent example of being blinkered by an over-simplified theory. I don’t trust their “simple signaling model” at all — it’s only virtue is that they can plug numbers into pages of mathematical formulae in their paper. But if it doesn’t accurately describe how wages are set, what good is it?

Their own data has massive differences that they cannot account for with their equations either. Notice that they have 4 times as many men as women in their data sample; why is that? Does banking have a demand for greater upper body strength? Is the ability to grow a beard, which most of them will shave off, some kind of qualification for accounting?

And there’s more. The authors say this about their data set:

Females are younger and slightly more educated, but have significantly more sick-days [In the US, men take on average 3 sick days/year; women take 5.2 –pzm]. They are also paid on average 20 percent less and are heavily under-represented in the managerial ranks.

This bank employs a quarter as many women, pays them 20% less, and doesn’t promote them to management…are we seriously going to look at the fact that they menstruate as a significant factor in those differences? Yeah, they are: they’re going to punch some numbers into their spreadsheets and announce that menstruation causes 11.8% of the discrimination…that it’s a rational decision based purely on numbers in their account books.

This is bullshit. It’s bullshit used to prop up odious arguments.

Our findings may have policy implications. Forcing employers, rather than women, to bear the monetary burden associated with menstruation may be counterproductive. Whether society should address this biological difference with a gender-based wage subsidy depends on voters’ tastes for redistribution. Clearly, this is not a case of market failure, and the rationale for the subsidy would be redistribution rather than efficiency. A gender-specific public subsidy financed out of general taxation would shift part of the costs of menstrual- related absenteeism from women to men.

That’s beancounting thinking. Of course society and employers should subsidize biology: their employees are all biological organisms! Are we going to argue that perhaps companies should not be required to pay to maintain restrooms in the workplace because every minute spent pooping is one minute not spent assembling widgets? How dare workers demand 40 hour work weeks, simply because their bodies demand nightly periods of sleep, and their brains require other activities to maintain their mental health? And don’t get me started on handicap access ramps and the need to maintain two kinds of restrooms or the whole ridiculous demand for lunch hours.

What this is is an argument that the standard for all employees is that they be an able-bodied man, and any difference from that represents a short-coming that should be penalized…and anyone who argues otherwise is promoting wealth “redistribution rather than efficiency”. And as we all know, jobs are not for people, but for the company, and our sole criterion for efficiency is what works best for the corporate management. Not the worker.

I think that’s the fundamental problem of this paper and many others like it. It looks at human beings as numbers in a spreadsheet, and assesses them statistically by their contribution to corporate “success”, as measured entirely by short-term profit to the shareholders and management. The perspective used to interpret the data skews the meaning. And when your perspective is entirely based on over-simplified models and a purpose that ignores values other than profit, you get demeaning garbage.

This paper was published by the US’s very own National Bureau of Economic Research. It is not some reactionary right-wing think tank — it has been summarized by Paul Krugman as:

The NBER is best described, I’d say, as the old-boy network of economics made flesh. There are a couple of NBER offices, but they’re small; what the organization mainly consists of is its associates and what they do. In many sub-fields of economics, just about anyone well-known in the profession is an NBER research associate (yes, me too); it’s normal for these associates to release new research as NBER working papers.

You can criticize the role the NBER plays, mainly because it privileges insiders. If you’re associated with the Bureau, you can get research out quickly in a place everyone will see, whereas if you aren’t in the magic circle, getting noticed can be much harder. I would say that economics blogs are starting to remedy this disparity, but there will never be a truly level playing field.

This is a problem, too. We aren’t talking about far right-wing tea party crazies here — this is a smug economic establishment trapped in a rigid capitalistic worldview that can’t see anything but tables of numbers. It’s a nice way to plod along, getting incremental improvements in “efficiency”, but it’s all going to hell when the people rise up and scramble all their equations with a more human reality.