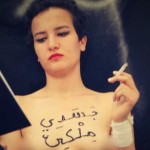 This well-written article in The Atlantic remarks on a familiar tactic. It’s about the Femen, the topless jihad, and Amina, and the complaints an annoying number of stodgy critics have made. You know the ones: the people who demand that all arguments be respectful, and insist that there are proper channels for debate, and protests that actually rile the establishment are inappropriate.

With its topless jihad and Femen leader Inna Shevchenko’s subsequent incendiary blog post on the event, Femen was both defending one of its own and upholding a right to freedom of expression (to say nothing of life and liberty) flagrantly violated by Amina’s own family and by an angry, largely Muslim, community from which threats against Amina and Shevchenko continue to emanate. It’s worth pointing out that Femen’s critics, several of whom professed concern for Amina’s well-being, did not speak out in Amina’s defense before the jihad, but only post-factum and in passing, all the while pummeling the group standing up for her with stale, politically correct shibboleths and demands to stay out of what they perceived to be their own business.

We saw this in all the battles over accommodationism: there’s always someone on your side who offended that you have chosen to battle antagonistically or unconventionally against oppression and foolishness. I think their favorite word must be “hush” — don’t upset the status quo, even if it’s the status quo you’re trying to upset. And most importantly, they insist that you have to follow their tactics, and they get to tell everyone how to engage, even if their history is one of largely sitting on their thumbs and getting chummy with the enemy.

Guess what is often at the root of that reluctance to actually confront? Yeah, it’s the same old boogeyman everytime, conservative traditionalism in the guise of religion.

There is a problem, however. The media has long fostered the view that religion should be de facto exempt from the logical scrutiny applied to other subjects. I am not disputing the right to practice the religion of one’s choice, but rather the prevailing cultural rectitude that puts faith beyond the pale of commonsense review, and (in Amina’s case), characterizes as “Islamophobic” criticism of the criminal mistreatment of a young woman for daring to buck her society’s norms, or of Femen for attacking the forced wearing of the hijab.

We’re seeing a lot of that lately, but it’s been going on for a long, long time. Point out that transubstantiation is ridiculous, and that Catholics don’t get to tell you to honor a cracker, and Bill Donohue raves that you’re an anti-Catholic bigot; stand aghast at ultra-orthodox Jews spitting on little girls for “immodesty” and you’re an anti-semite; critize the deeply rooted misogyny in Islam, a misogyny that harms men and women in the faith, and you’re declared an Islamophobe.

Just because it’s cloaked in the self-declared mystery of religion doesn’t mean it’s exampt from scrutiny and rejection.