I can call them ‘strident,’ can’t I? They apply it to atheists all the time, and this is clearly a case where the adjective is perfectly appropriate. It’s an opinion piece by a militant (I can use that, too!) Catholic who traces the fall of America to a court decision in 1972.

This year, the Supreme Court will render judgment on the institution of marriage. Though most of us don’t realize it, the Court first did so forty-one years ago in Eisenstadt v. Baird, a decision that gravely wounded marriage and set the nation on a course of gradual debilitation by ruling that states could not restrict the sale of contraceptives to unmarried people.

Oooh, marriage was ‘gravely wounded’ by that decision. It was a fairly straightforward issue in civil liberties: could the law decide that contraception could only be sold to married couples? The court decided no, it could not: even unmarried people have a right to regulate their reproduction by means other than abstinence.

Chaos then swept across the country as suddenly men and women were able to fornicate without spawning children! Yes, chaos! His word, not mine.

Having set chaos in motion in Eisenstadt, the Supreme Court quickly built the garbage bin for dumping sexual debris in Roe v. Wade, which gave a green light to the killing of 55 million unborn children, the overwhelming majority of whom were conceived by those unmarried singles with new access to contraceptives.

Having lived through that period (I started high school in 1972, so I was in prime temporal position to witness precisely all the horrible consequences), I’ve got to tell you: some kids were screwing before 1972, most were not. After 1972, some kids were screwing, most were not. There were single mothers, plenty of them, before 1972, and plenty afterwards — conveniently, during this period I worked part time as an assistant custodian in a school for single mothers*, so again I was in exactly the right place to witness the aftermath of sexual chaos.

Also, I’ve got to wonder if the author thought his thesis through. New access to contraception led to a surge in unwanted pregnancies? Only if they weren’t doing it right. Maybe we should have coupled contraception access to better sex education.

Or just maybe the chaos was all in the author’s head. 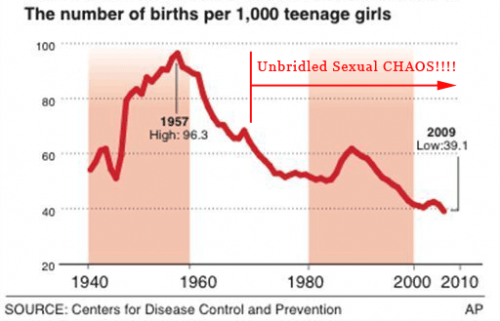 A lot of things are obviously only playing out in this guy’s head. This is the extreme Catholic position: it’s not just that child-raising must be carried out within a marriage, but sex is supposed to be channeled towards only supporting procreation. Which is scary, speaking as an old (but not dead) guy who has put all his baby-making days behind him.

Thus, in a well-ordered society sex and marriage go together exclusively, because the union of male and female sexual expression must be undertaken in a union that binds them in advance of the coordinated labors needed to raise the children they may bring into the world. To achieve this, a functioning society demands that each citizen channels his sexual capacities in ways appropriate to these two tasks (procreation and child-raising). That is, it demands marriage.

How about if sex has other roles? What if it’s a general social binder that brings people together in close affection? Wouldn’t that be a good thing, too?

And what if marriage isn’t such a great matrix for raising children when the two adults involved have lost that affection? Surely no one can believe that marriage is sufficient to create a healthy family environment, and knowing more than a few stable, happy couples who are not bound by formal marriage, it’s not even necessary.

So how can Catholics justify sacrificing the richness and complexity of human relationships on the altar of their narrow definition of how people must cohabit?

*Predictably, the community felt the need to isolate unwed mothers from other women their age; they might contaminate them. Also predictably, colloquial references to that school called it the ‘school for bad girls’. Further predictability: I did not tell anyone that I was scrubbing floors and cleaning bathrooms there after school and during the summer because every idiot would have lurid fantasies about what I was doing, when actually I spent little time interacting with the women there (I was working outside of school hours), and what little I did see were women in isolated and difficult circumstances.

Yay! Another reservoir of sequestered carbon can now be released into the atmosphere! » « Good report on Federal wildlife torture from a surprising source