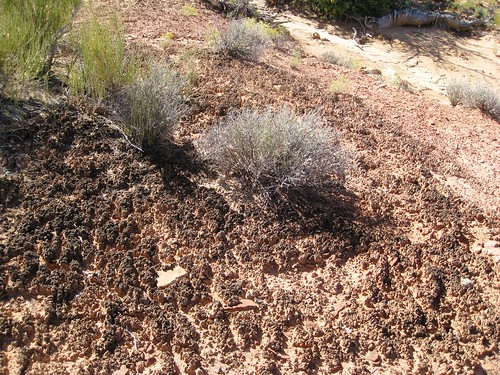 The Palm Springs library talk last week went well: reasonable crowd given the venue, lots of good questions, and though they weren’t set up for video there’s some talk of my doing a repeat even more local and I’ll make sure we get video of that, if it happens.

One of the questions that came up was about something that was related to the topic of my talk but worthy of its whole own presentation: cryptobiotic soil crusts. I was instructed to come up with an hour-long presentation on the topic and come back. I think they may have been kidding.

Cryptobiotic soil crusts, also referred to as cryptogamic soils, or just plain “crypto,” are pretty common in arid lands that haven’t been disturbed for a while. They’re alive, as indicated by the  suffix “biotic”: living communities of half a dozen different kinds of organisms: cyanobacteria, green and brown algae, fungi, lichens, mosses and liverworts. The “crypto” part means that when conditions are less than optimal, the organisms that make up the crust can go dormant, seeming to die off — “hiding” their life. Cryptobiotic.

The crusts develop in places where there isn’t enough moisture to maintain a soil vegetative cover: no trees, no sod, no leaf litter, no humus. They usually start with filamentous cyanobacteria, which grow mats similar to fungal mycelia penetrating the top inch or three of soil. Cyanobacteria photosynthesize and many of them fix nitrogen, so  all they need to grow is water and a few soil nutrients. When it’s wet they extend their filamentous sheathes into the soil, which is exactly as sexy as it sounds, and then when the drought comes the cyanobacteria shrink back but the sheathes — made of polysaccharides, mainly — stay behind.

Sometimes the crusts begin with green algae instead of cyanobacteria, often in places where the base soil is more acidic. Sometimes the two foundational phyla coexist, and sometimes a crust’s bedrock filament mat will shift from one to the other if soil pH shifts. Over time an entire swath of soil can become riddled with the filaments, and other organisms colonize them. Lichens are common crust inhabitants, as are free-living fungi, and the fungal hyphae from both add to the sturdiness of the crust. Mosses often join the cryptobiotic crust community, as do liverworts.

In cold deserts, these crusts can form pinnacles six or eight inches high. In hot deserts like the Mojave, the crusts are usually bumpy surfaces, with about an inch or maybe two of relief, and in the Sonoran and hotter deserts, they’re flatter.

The bacterial/algal/fungal “root” system of these crusts is really good at extracting nutrients other than nitrogen from the desert’s mineral soil, as well as stabilizing that soil against wind and water erosion, and holding onto soil water with those polysaccharides. As you might guess, this makes the crust a good place to germinate if you’re a vascular plant seed — assuming you can penetrate the crust to do so. Crusts often serve as nurseries for bunch grasses, annual plants, and even long-lived shrubs, whch benefit from the water-retention and nutrient-extraction services the crusts perform.

Crypto also serves an air quality control function: it’s a dust trap. Particulate matter ranging in size from smoke to sand lands on the crust, falls into its fractal surfaces, gets trapped by filaments. The crust adds the particles’ biological and nutritive distinctiveness to its own. That helps fertilize the surrounding shrubs.

The bad news is that this crust is fragile. Really fragile. A careless step by a 95-pound human in tennis shoes can do damage that takes a century or so to heal. If the desert’s main problem was 95-pound tennis players stepping on it, that might be a manageable level of damage. But there are several different vectors of more significant physical damage we’ve unleashed on cryptobiotic crusts in the past, including: 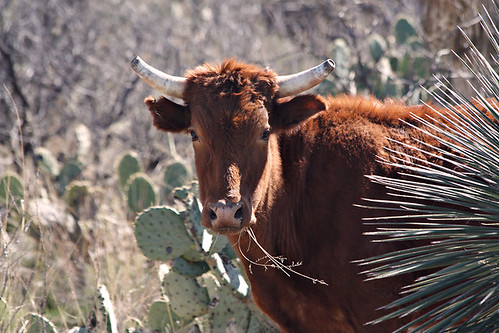 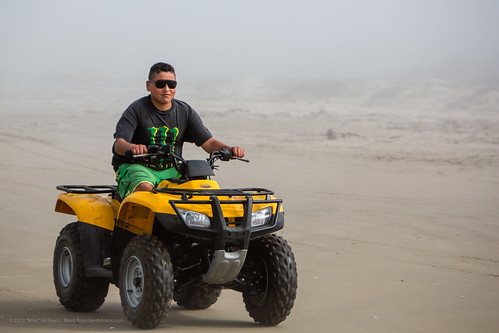 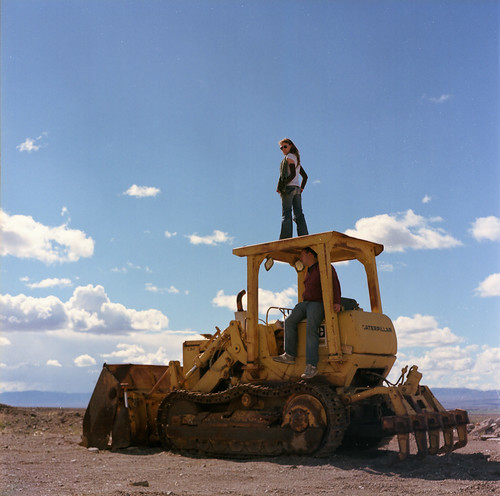 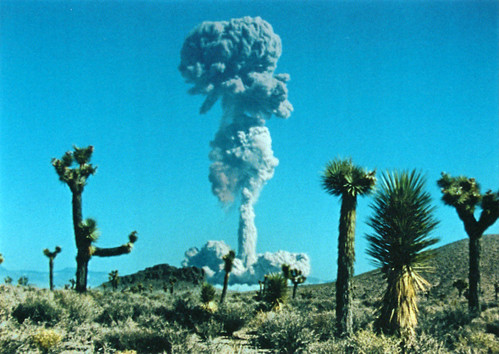 Once damaged, the speed at which a crust regenerates varies. If it’s only a footprint-sized gouge, the cyanobacteria might well rebuild a filamentous mat within a decade, rain permitting. The full complement of lichen and moss will take longer. And if the damage is so widespread that there’s little cyanobacteria-algae-fungus-muss inoculant left in the area, it could take a lot longer. Millennia.

One last thing that organic mat of microorganisms and tiny plants does: it sequesters carbon. Polysaccharides, after all, are just carbon dioxide turned into sugar and then polymerized. The amount of CO2 an acre of healthy desert  sequesters each year is a hot topic in desert ecology over the last few years, with some good scientists saying “a lot” — as much as 100 grams per square meter in the Mojave per year — and other good scientists saying “wait a minute, let’s see some better data and some explanation of where that carbon actually goes.”

But it’s certainly more than “none.”

Why I am an atheist – The Atheist Firefighter » « The race is over. Obama’s going to win