Just the title was enough to make me squeamish: Penetration of the Oral Mucosa by Parasite-Like Sperm Bags of Squid: A Case Report in a Korean Woman. It seems the woman thought she was getting dinner; the squid saw a last chance to reproduce. As is common with these kinds of misunderstandings, neither got what they wanted.

We report a case of oral stings by spermatophores of the squid Todarodes pacificus. A 63-yr-old Korean woman experienced severe pain in her oral cavity immediately after eating a portion of parboiled squid along with its internal organs. She did not swallow the portion, but spat it out immediately. She complained of a pricking and foreign-body sensation in the oral cavity. Twelve small, white spindle-shaped, bug-like organisms stuck in the mucous membrane of the tongue, cheek, and gingiva were completely removed, along with the affected mucosa. On the basis of their morphology and the presence of the sperm bag, the foreign bodies were identified as squid spermatophores.

Has this story been optioned for a horror movie yet? 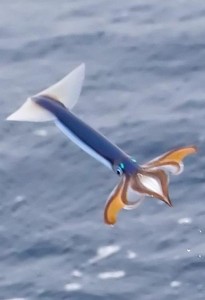 By the way, Todarodes pacificus is the Japanese Flying Squid — now with the reputation of being vicious airborne inseminators.

They all look alike, don’t they? » « Sounds familiar