After I explained that both Andrew Sullivan and Kevin Drum were wrong about the frequency of Young Earth Creationism in America, another disputant enters the fray: Robert Wright claims they’re both right, and further has identified the true cause of all those citizens jumping on the creationist bandwagon.

You’ll never guess whose fault it all is.

A few decades ago, Darwinians and creationists had a de facto nonaggression pact: Creationists would let Darwinians reign in biology class, and otherwise Darwinians would leave creationists alone. The deal worked. I went to a public high school in a pretty religious part of the country–south-central Texas–and I don’t remember anyone complaining about sophomores being taught natural selection. It just wasn’t an issue.

A few years ago, such biologists as Richard Dawkins and PZ Myers started violating the nonaggression pact. [Which isn’t to say the violation was wholly unprovoked; see my update below.] I don’t just mean they professed atheism–many Darwinians had long done that; I mean they started proselytizing, ridiculing the faithful, and talking as if religion was an inherently pernicious thing. They not only highlighted the previously subdued tension between Darwinism and creationism but depicted Darwinism as the enemy of religion more broadly.

Gosh. Richard and I don’t know our own strength.

Just to help you all out, here’s the graph that is the subject of the discussion. I’ve helpfully added a couple of arrows to help you see exactly when we started to cause this problem. 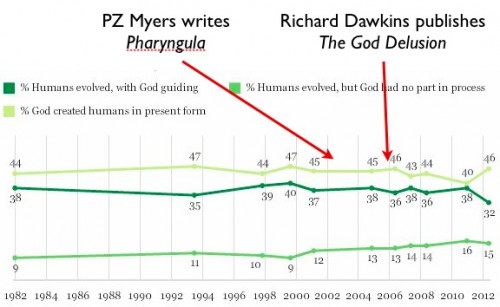 How can you possibly argue with that dramatic correlation?

Yeah, I also remember to going to high school in a fairly secular part of the country — western Washington state — and getting no exposure to evolution at all in my science classes. I also recall major court cases in 1968 and 1982 and 1987 in which creationists tried to force the teaching of creationism and block the teaching of science in our public schools — that was some nonaggression pact.

But then, 1968 was roughly when I first decided that religion was crap — I’m forced to conclude that it was the stirrings of doubt in a prepubescent kid near Seattle that fired up the creationists in Epperson v. Arkansas.

Damn, but I was ferocious.

Either that, or Wright is an idiot who knows nothing of the actual history of this subject and is willing to make up explanations that defy the evidence.