There is no story to this story. I spent a long day driving yesterday, and my mind wandered, and I’m writing it down, because I can. That’s all, don’t expect anything more. It’s totally pointless.

Actually, I wasn’t driving. My wife was. She’s taken to chauffeuring me on my various trips, which actually encourages my mind to wander even more, without the focus of having to pay attention to the road. I think she’s also becoming my bodyguard and general protector. It’s a good deal I have, because I can face the world with total confidence, knowing that if anyone did me harm, Mary would hunt them down and destroy them.

Did I mention she was wearing a skin-tight black leather catsuit? She totally was. I think. She should have been.

But this story isn’t about Special Agent Mary, Scourge of my Enemies, although it should be. It isn’t sharp-edged enough. I was maundering (a wonderfully good word, one that I use more and more the older I get) sleepily in a warm car on a sunny day, and I saw a strikingly burned out old stone farmhouse by the side of the road, so I started thinking about the houses I grew up in.

Wait! Aren’t old guys supposed to reminisce about past loves in their idle moments? No, not with heavily armed deadly Mary in a catsuit next to me. Houses are safer.

I lived in a lot of different houses as a kid, all in the quiet little town of Kent, Washington. My father was on the Boeing yo-yo — getting good blue-collar jobs at one of the plants for a while, then getting fired in the next round of layoffs, then getting hired again — so it seemed like every other year we’d move to a nice little cracker-box house in a middle class neighborhood, and then the next year we’d move to some old run-down hovel to save money. And sometimes in the middle of that year we’d move to a cheaper hovel on short notice.

The nice cracker-boxes were not memorable. The older houses had character. I remembered them well.

No, I lied. I remember almost nothing about the apartment — I was very young, a toddler, and we lived in an upstairs apartment on 1st Avenue, next to a factory that cut and folded sheet metal. My oldest memory comes out of that little set of rooms.

My mother brought home a toy microscope, and showed me how to use it. I don’t recall seeing anything through it, though…I just remember chasing the light. The sun was shining in a bright square on the coffee table, and we moved the scope and fiddled with the little mirror in the base to aim a spot of light on the slide. That’s what caught my imagination — I could manipulate the sun? Awesome. What power. I felt like a little Newton, not knowing who Newton was.

The building and the factory aren’t there anymore. They were paved over to make a parking lot for the Lutheran Church. 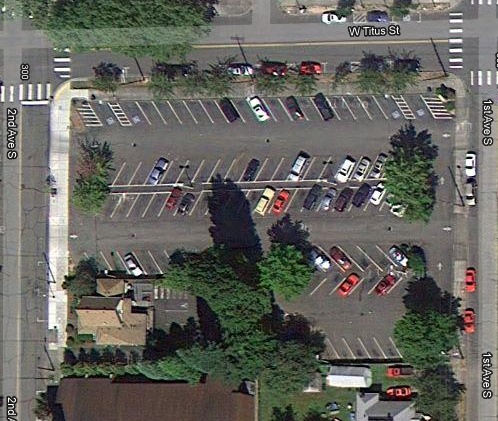 The House of Flies

When I was 11, we moved to an older farmhouse on the west side of town surrounded by fields of lettuce, and beyond those, fields of corn, and all were dotted by small ponds. In the house itself, we boys were given the upstairs bedroom to sleep in, and the first day, to our horror, we discovered that the floor was covered with dead flies — big black flies covering everything, with a few still alive, battering themselves against the window. It was swelteringly hot up there. The flies crunched as we walked across; we swept the floor, pushing great deep drifts into piles that we scooped up and tossed into bags to haul away. It was bizarre and disgusting, but once they were gone, it was a lovely place to live.

My excuse for not thinking of it then was that I was 11, but years later when I was in high school, I bolted upright in bed one night with a sudden thought: where did the flies come from? What did they hatch out of? There had to be tens of thousands of flies there! I wanted to go back and tear up floorboards and rummage about in crawlspaces to discover what dessicated horror fed them.

That house is still there — the backyard seems to have been turned into a parking lot, but presumably the house is still liveable. Except for the thing under the floorboards. 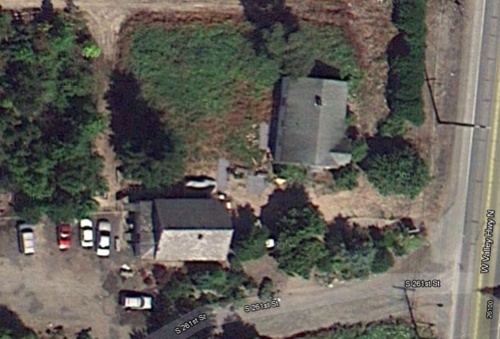 After my grandmother died, we moved into her house, a small place that had been built by my grandfather in the 1930s, on WIllis Street. It had seen better days, and was sagging and listing like an old ship slowly sinking. The kitchen floor was canted and made a wonderful place to play with toy cars, releasing them and racing them downhill. The west wall of the living room was cracked; you could look out through the gaps, at least where the ivy hadn’t grown through. That was one of the lovely things about it, that outside it was sheathed in ivy, and that it had also grown inside to make a breezy wall of green.

That was a wonderful house. It probably should have been condemned, but family memories — my grandparents had built it, my father had grown up in it, it was the center of family gatherings — were so thick there that I’m sure they were sufficient to hold it up.

Years later, it was demolished. Those memories were leveled to make a paved area for storing old tires. 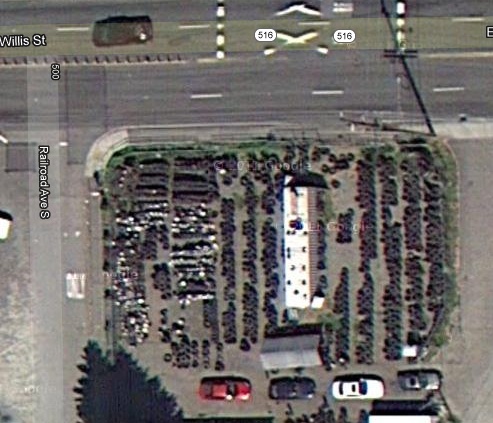 Kent was a small town when I lived there, more rural than urban, so we lacked many of the ills of the big city. But we did have a row of rather shabby houses on 2nd Avenue (just a block west of The Apartment) which were all owned by the Catholic church, and probably constituted the closest thing to a slum we had in town. We lived in the corner house for a time, and I recall getting the responsibility of carrying the monthly rent check to the caretaker’s house, several blocks away. Mr Levesque had a very nice place, large and clean and filled with fancy furniture and lots of Catholic kitsch — I confess to feeling stirrings of resentment that we had the house with rats, and we were paying the rich man for the privilege of living there.

The bad thing about that house: location. It was sandwiched between the Catholic church in our backyard and the Lutheran church across the street…and the Lutherans had those damned electronic chimes that played hymns at a volume to be heard clear across town, every half hour. You can imagine what it did to us, right next door.

The good thing about that house: location. It was two blocks from the public library, where I lived during most of my high school years. Had to flee the chimes, you know.

The Catholics later tore that house down and turned it into a church parking lot. If I revisited the town to visit my favorite places of childhood and youth, I’m afraid it would be a walking tour of Kent parking lots. 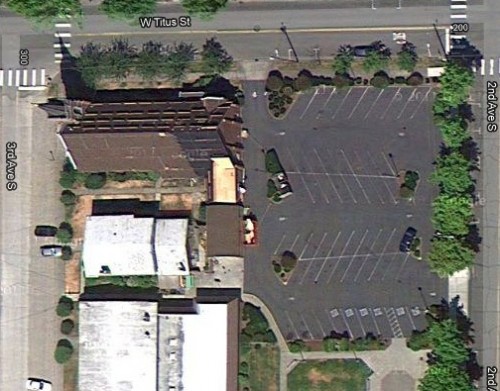 One other thing about that last house. We lived there when I attended high school, and I had to walk across town to catch the bus up the hill to Kent-Meridian. And sometimes, when I was walking home in the afternoon, I’d meet up with this girl who was also walking across town to her house, a few blocks away from mine. One lovely spring day we were walking along and my baby sister Lisa, who must have been about four, was out sitting on the stoop, and she started a sing-song chant about how I had a girlfriend before running inside to tell everyone, to the mutual embarrassment of myself and the young lady.

I’ve realized since, though, that my conceit that I was just walking her home was wrong — her house was farther away than mine, so she was actually escorting me home. I think she was wearing the catsuit under her school clothes even then.