Watch this little sketch first, and think about it.

I am relieved to say that skulls are not an official motif in US military uniforms, although some units do use them. However, we instead have Nazi-like minds at work in our military. Here’s an excerpt from a presentation at the Defense Department’s Joint Forces Staff College, composed by Lt. Col. Matthew A. Dooley as a proposed model for how to deal with Islam. 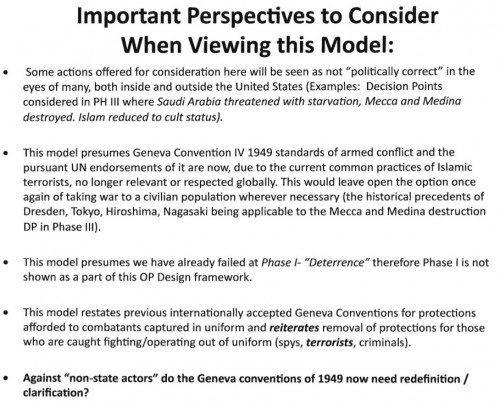 When I hear the phrase “politically correct”, I’m afraid my knee tends to jerk, usually in the direction of some jerk’s groin. It is the tired excuse of the fanatic trying to rationalize the unforgivable. “Oh, excuse me, I’m going to talk about incinerating civilians in a nuclear holocaust, take your ‘politically correct’ objections out of the room.”

And that’s exactly what he’s discussing. Let’s forget civilized accords limiting the conduct of war, and frankly discuss nuking Mecca and Medina. It’s OK, we’re going to remove protections for those caught fighting out of uniform, and pretend that every inhabitant of those two cities is a spy, a terrorist, or a criminal.

You can download the whole presentation; it’s an awful mess of jargon and pointlessly busy military diagrams that say pretty much nothing at all, and it’s main point is to redefine every Muslim in the world as a military combatant who deserves everything we do to them.

It closes with this message:

It is therefore time for the United States to make our true intentions clear. This barbaric ideology will no longer be tolerated, Islam must change or we will facilitate its self-destruction. Let it be known that the United States remains, and will forever be, a beacon of freedom, self-determination, hope, and representative democracy. The American people will not be converted. We will not submit. We will not be intimidated, and we will not be driven from this earth.”

That is remarkably tin-eared and hypocritical. It accuses the other side of being a barbaric ideology while planning to nuke the civilian population centers of the Muslim world…oh, wait, “facilitating their self-destruction.” So we’re going to drop a bomb on them and then innocently declare that it was their own fault?

It rather deflates the grand ideals of “freedom, self-determination, hope, and representative democracy” when you use them as buzzwords to justify the murder of millions.

But perhaps that scale of terror is too immense for your brain to absorb. How about this little morsel, instead?

The American military claimed responsibility and expressed regret for an airstrike that mistakenly killed six members of a family in southwestern Afghanistan, Afghan and American military officials confirmed Monday.

The victims were the family’s mother and five of her children, three girls and two boys, according to Afghan officials.

This family was just quietly living in this house in Afghanistan, when the full weight of American freedom, self-determination, hope, and representative democracy dropped into their living room in the form of a military airstrike.

I think we’re the baddies.

But at least we apologized nicely. I’m sure that made it all better.

Guess what the election is going to be all about? » « First they came for the political scientists…