The Patriarch of the Russian Orthodox Church was caught on camera wearing a $30,000 Breguet watch. I can think of little that’s more worthless than spending the entirety of a middle-class working person’s yearly salary on an ostentatious geegaw that has no function that isn’t served as well as a $10 throwaway or the ubiquitous cell phone…no function other than showing off that you’re more profligately wealthy than anyone else, that is. You know, if someone gave me something that trivial and that overpriced, I would thank them, quietly sell it, and then find a cause on Foundation Beyond Belief that could make better use of the money than being tied up in flashy bling.

But what do I know. I’m a godless atheist, he’s the moral leader of millions.

But he does have some shame. After the photo appeared, the church quickly whipped out a copy of photoshop and doctored the image to hide the jewelry. Can’t have the peons witnessing the church’s conspicuous consumption! 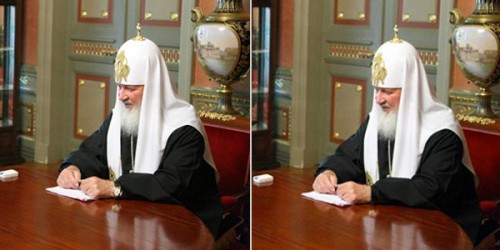 Then the Patriarch denied everything.

Patriarch Kirill weighed in, insisting in an interview with a Russian journalist that he had never worn the watch, and that any photos showing him wearing it must have been doctored to put the watch on his wrist.

Unfortunately for the Patriarch, the evidence was undeniable, and the church was later compelled to admit that yes, the old guy had been wearing the watch, and yes, they’d tried to airbrush it out of existence. They lied, he lied.

But the patriarch has presented himself as the country’s ethical compass, and has recently embarked on a vocal campaign of public morality, advocating Christian education in public schools and opposing abortion and equal rights for gay people. He called the girl punk band protest at the cathedral “sacrilege.”

The Patriarch has more important concerns than petty trivialities like his penchant for extravagant jewelry, the corruption of his church, or the ridiculous hypocrisy of a religion founded on claims of the importance of the immaterial spending profligately on toys of the obscenely wealthy.

The Rev. Vsevolod Chaplin, a senior church cleric, played down the episode. In a telephone interview, he said that the controversy over the watch was distracting attention from more serious questions, like “the borders of artistic freedom and the meaning of the Gospels today.”

Do not question the moral leader of millions.

Is that border magical? » « Friday Cephalopod: A reader submission!