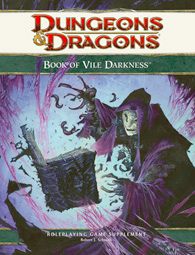 In email, Libby Anne passed along a little jewel from her youth: some radio propaganda against that horrible demonic portal to evil, Dungeons & Dragons. It’s a radio show called Castles and Cauldrons, with a special introduction from James Dobson, warning you kiddies about the dangers of those role-playing games and their non-Christian magic and mysticism, which will lead them into contact with demons and satanism. It’s a two-parter, with summaries of Part 1 and Part 2. Warning: it’s laced with commercials for Focus on the Patriarchy.

They play a version of the games I’ve never encountered. These games give you actual magic powers that allow you to summon demons and control people and eradicate your enemies and read people’s minds. They sure seem a lot more powerful than Christianity.

Why I am an atheist – Thomas Lawson » « Learn to lobby — power to the godless people!