Minnesota tuition rates have also been skyrocketing. My salary has been creeping upward at single digit percentage rates — low single digits, and we also had a freeze for a few years — and also, we haven’t been hiring swarms of new faculty, but only replacing retiring faculty (which, by the way, immediately reduces salary expenses). Why is this happening? 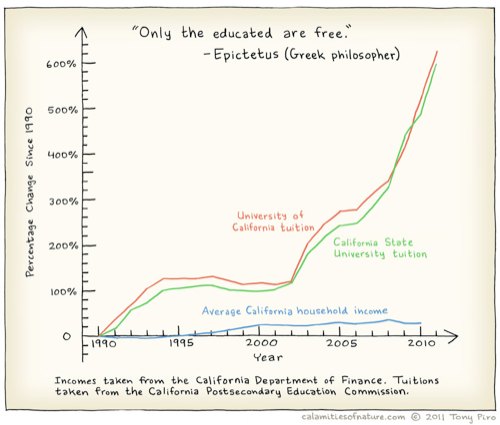 The answer is easy: state governments have been jettisoning their responsibilities and not paying for the educational institutions earlier, wiser generations invested in. Thank you, Republicans, the party of irresponsible spendthrifts, for coasting on the infrastructure built up 50 years ago, and letting it decay now.

Science overwhelmed by self-defeating awe » « Will you be among the #NudePhotoRevolutionaries?