The Vatican wants to sue a clothing company over an ad.

“It is a serious lack of respect for the Pope, an affront to the feelings of the faithful and an evident demonstration of how, in the field of advertising, the most elemental rules of respect for others can be broken in order to attract attention by provocation,” Holy See spokesman Federico Lombardi said in a statement about the ad.

“The Secretariat of State is examining the steps that may be taken with the competent authorities in order to guarantee adequate protection for the figure of the Holy Father,” Lombardi said, referring to the Vatican’s secretary of state.

Odd…I wouldn’t have even noticed the ad, and certainly wouldn’t have thought to put up a blog post about it, except for the fact that the Vatican is popping blood vessels all over the place over it. So here you go, free advertising for Benetton! 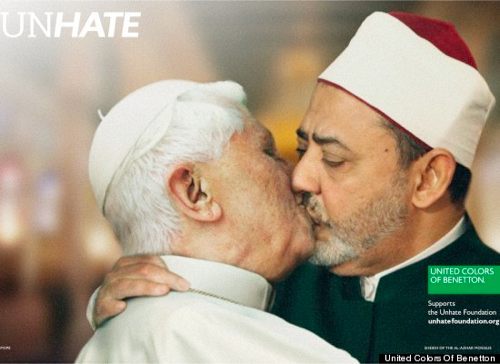