We’ve encountered Michael Voris before: the painfully dogmatic and fervent Catholic Dominionist kook. He has a ridiculous video in which he asserts that theology is the queen of all the sciences because everything reduces to god, ultimately — which does leave one wondering why theology never produces any ideas that are actually useful to all of those scientific disciplines. I mean, take math for example: mathematicians are constantly coming up with tools and ideas that chemists and physicists and biologists and geologists all find awesomely useful. But what has theology given us? Nothing.

Michael drones on, going through the motions — he really seems dead-eyed and robotic in this video, doesn’t he? — and you probably got bored 30 seconds into the 5 minute clip. So I want to focus on just one point that Voris made, and mentioned in the caption, and which actually isn’t unique to Catholic nutjobs at all.

The fields of science can offer all kinds of information in answer to the question how… through the observance of the human intellect. But when asking the question why, man MUST turn to the divinity of the Creator.

How many times have you heard that claim: science can answer “how” questions, but it can never answer “why” questions, therefore we have to leave those kinds of questions to a non-scientific domain, which must be religion, therefore god. And that’s wrong at every step!

There’s no reason the interpreter of “why” questions has to be religion…why not philosophy? That seems a more sensible objective source than a religion burdened with a dogma and a holy book and wedded to revelation rather than reason. Voris assumes there has to be a divine creator, but that’s one of the questions, and you don’t get to just let it go begging like that.

The more fundamental question, though, is this oft-repeated distinction that science can’t answer “why” questions. Of course it can, if there’s a “why” in the first place! We are perfectly capable of asking whether there is agency behind a phenomenon, and if there is, of exploring further and identifying purpose. Why should we think otherwise?

Imagine you came home, as I did the other day, and saw this on the edge of your yard. 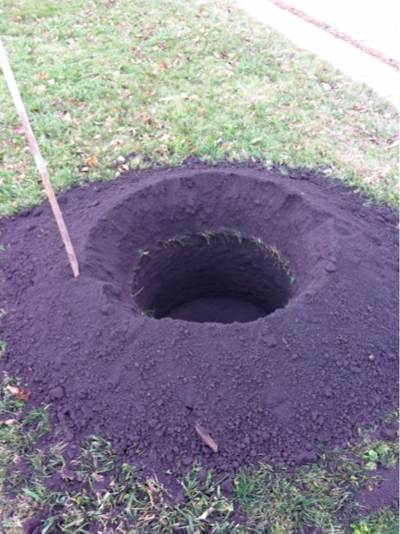 You’d immediately assume it was artificial, as I did — the perfectly circular outline suggests that a machine came by, and someone lowered some auger-like device and drilled a large hole in the yard. You could also look up and down the street and see that the hole-driller had struck several other places, all in a line parallel to the road and exactly the same distance from the curb. They are almost certainly the product of intent.

Does that in any way imply that I’m now done, that asking why these holes were dug is beyond the scope of all rational inquiry? That I ought to drop to my knees and praise ineffable Jesus, who caused holes to manifest in the ground for reasons that I, as a mere mortal man, cannot possibly question? Oh, Lord, mine is not to question why, I must accept what is!

Of course not. I can speculate reasonably; it looks like a hole for planting something in. I can check into the city offices, and learn that there’s concern about emerald ash borers killing trees in our community. I can see the next day that a city crew came by and put new saplings in place all up and down the street. Even without actually talking to anyone directly, I can figure out from the evidence why there is a hole in my yard.

Similarly, if there was a god busily poofing the entirety of the cosmos into existence, that’s an awful lot of evidence that can be examined for motive…are we to instead believe it is so incoherent that we can discern no possible purpose behind all this data?

And what if instead, I’d come home and found one hole in the neighborhood, it was a rough-edged and asymmetrical crater, and in the center of it was a small rocky meteorite? Then I could ask how it came to be there (it fell out of the sky and smacked into my yard), and I could try to ask why, but the answer would be that there was no agency behind it, there was no purpose, and it was simply a chance event of a kind that happens all the time.

When people try to argue that science can’t answer “why” questions, what they’re actually saying is that they don’t like the answer they get — there is no why! There is no purpose or intent! — and are actually trying to say that the only valid answer they’ll accept is one that names an intelligence and gives it a motive. That is, they want an answer that names a god as an ultimate cause, and a description that doesn’t include agency doesn’t meet their presuppositions.

Competition is good » « Why I am an atheist – Jim Atkins