I’m typing this on a Mac laptop. I heard about it while browsing the news on my iPad. I have an iPhone in my pocket. There’s an iPod in my bedroom that we use for alarm and music. I bought my first Mac in 1984; I wrote my Ph.D. thesis on an Apple II. Maybe you use a Windows machine, but face it: Microsoft has been chasing Apple’s interface design since the 1980s.

And now Steve Jobs has died.

We owe a lot to him. He’s the guy who shaped our virtual world.

One bit of levity: Westboro Baptist plans to picket his funeral, simply because they’re assholes. Look at the bottom of their tweet, though. 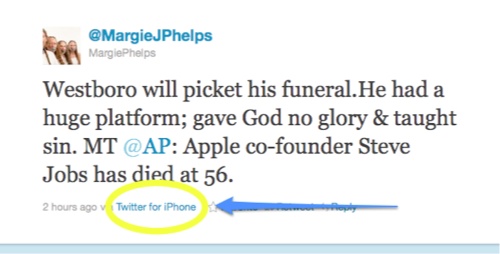 Botanical Wednesday: Is it cheating to pose a charismatic metazoan in the vegetation? » « Awesomeness