I’m not going to post this email I received, simply because it is insanely long, 15,000 words of random caps and peculiar color changes. Just to give you a taste, this is the subject line:

Subject: SCIENCE, AND THEOLOGY {{ Cogent Word for the 100’s of new ears in Science and theology we contacted/called last week around earth }} CHIMERISM, deaths/Wolbachias/satans attack upon Adams Society, ULtra Microbic Life Force/death Force — How does the Harlot called death ride Adams children and cause death and aging??? Listing below — {{ A Brief Word on obamas Buffet taxes, and Word that all most pay their share, Very well stated }} The Holyone has been Shaking Greece trying to tell Germany and all do not feed them any more — Eleanor Mondale and Kara Kennedy Esq; Die at Fifty one, but hours from each other — His Quakes now become stronger to Oklahoma and Canada —- SCIENCE allowed Gamers to finish their Research — “i” gather those of increased knowledge and wisdom…Death and aging now end…..It has begun…Bring home your Missions…Dubai city is soon no longer…..

What I did want to share, though, is that this one is illustrated. Along with the author’s claim that he’s the prophet specifically sent to gather the 144,000 people who get to go to heaven, he included a lovely illustration of his lord and master, Jesus, who just happens to look rather European. 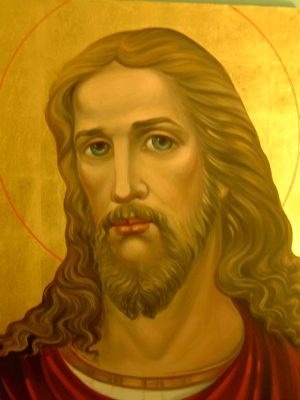 Green eyes, really? And not even a hint of a tan? Is it cloudy all the time in heaven or something?

But the other interesting thing about it is that the author has apparently been looking for science images to bolster his credibility, somehow. The amusing part is that he replaces the scientific caption with his own…it sorta changes the impact of the picture. This one, for instance, looks to me like some photomicrographs of developing Arabidopsis — it becomes something more nefarious when filtered through the twisted mind of my correspondent. 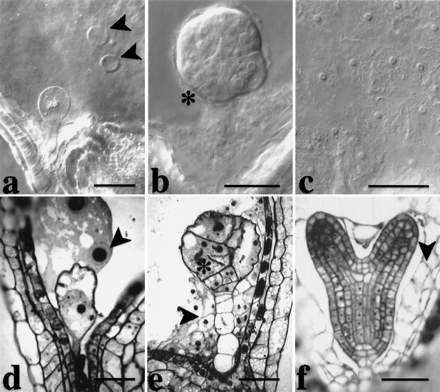 {{ One of the many biological machines, developed by the unclean spirit called death/aging/satan!!! It is not the machine you look upon, it being so small and microbic, it is the ultra microbic spirit that is navigating the machine, hidden within!!! The image is of Leaven/yeast/decomposer society/death }}

His other obsession is with chimeras, which he seems to think are truly evil. I think he seized upon the image below because it says “merge”, when all it really is is a digital merge of confocal images viewed at a couple of different wavelengths. 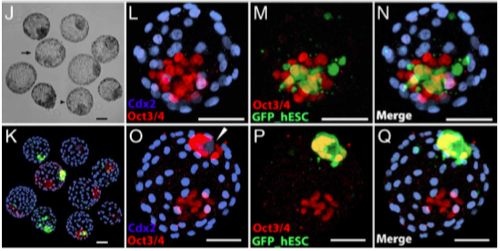 When both man and woman are conceived they are female, then the Fathers genome sent through time through each child born since Adam, makes the change of Female to Male, both being first given female organs, then the testosterone levels, with but a few more changes, and done, Man is born from God and Woman!!! But as shown in the first book of the Bible, and the Last, Woman the Daughter of Eve/ADAM is under greater attack!!!

I like this one best, though. It ought to be titled “SCIENCE OFFENDING GOD!”

{{ Stem Cells of Life, as much as we tried, we could not locate an image of a Chimera, but the image below, is of Science trying hard to offend God by making a chimera of Human and animal embryos!!! And is how “i” believe Wolbachia/myco-controlled phages and viruses are able to breech the segregated world of the Givers of Life, the Stem Cells of Gods Sons Spirit }} 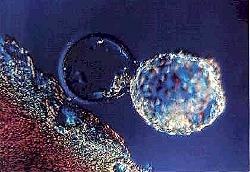 Chimeras, “i” myself have been searching for the way Wolbachia/myco-bacterial phage spirits have altered Gods Children of Adams genomes!!! Interestingly, when “i” settled on Chimeras, and went into the internet, and merely typed in Chimeras, very little arose truly, yet some very interesting theories were exposed, they being Wrong, yet showed they were trying to awake too deaths/aging attack upon mankind/Adamskind!!!

It goes downhill from there. The rest is ranting about Obama, sodomites, droughts and hurricanes, larded with lots of bible quotes…the usual pedestrian stuff I find in my mailbox.

No, no, no — this is not bisexuality or homosexuality » « Humanity’s recent surge