Earlier this semester, I gave my first-year students a thought question. I do this now and then just to wake them up and get them thinking and talking — in this case, I wanted them to speculate and also think hard about how they came up with their answers, and how they would try to evaluate them. Here’s the question:

Anatomically modern humans first appear in the fossil record about 150,000 years ago. The first record of systematic agriculture appears about 10-15,000 years ago. The Industrial Revolution began about 300 years ago. People nowadays seem to be coming up with new ideas at an increasingly rapid pace. What’s going on? Why did it take ancient hunter-gatherers over 100,000 years to invent farming, but going from the invention of the airplane to passenger jetliners took less than a century?

Now The Economist comes up with an interesting chart that might explain some of that. 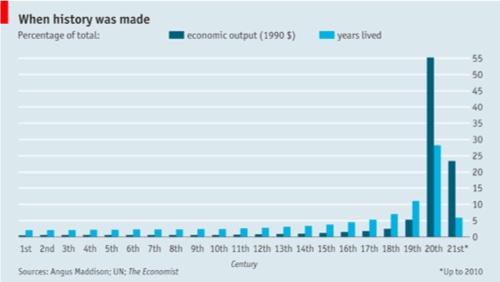 SOME people recite history from above, recording the grand deeds of great men. Others tell history from below, arguing that one person’s life is just as much a part of mankind’s story as another’s. If people do make history, as this democratic view suggests, then two people make twice as much history as one. Since there are almost 7 billion people alive today, it follows that they are making seven times as much history as the 1 billion alive in 1811. The chart below shows a population-weighted history of the past two millennia. By this reckoning, over 28% of all the history made since the birth of Christ was made in the 20th century. Measured in years lived, the present century, which is only ten years old, is already “longer” than the whole of the 17th century. This century has made an even bigger contribution to economic history. Over 23% of all the goods and services made since 1AD were produced from 2001 to 2010, according to an updated version of Angus Maddison’s figures.

I might show this graph to the class next year when I ask the question, but I’d still get to emphasize that the how of knowledge is really important: a serious flaw in the chart is that they don’t explain how they came up with, for instance, their estimate of relative economic output in the 5th century.

The 21st century is off to a roaring start, isn’t it?

I get email » « No, no, no — this is not bisexuality or homosexuality