Gah, I hate flowcharts. And I hate pathetic attempts to explain philosophy with a flowchart.

Most people, I’ll wager, have a pretty hazy relationship to spiritual beliefs. For example, there are Christians who don’t go to church, Jews who don’t believe in God, and agnostics who don’t really believe in God but also say they’re spiritual. If you know exactly what you believe in, then consider yourself lucky. For the rest of us, this handy infographic, created by Cameron Blair of The Fellowship for Evangelism in the Arts, lays out an astonishingly wide array of religious thought into one deceptively simple flowchart. 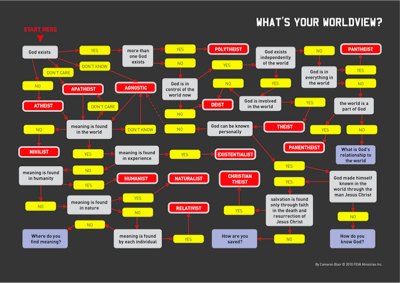 Ugh. That thing is hideous — it’s another example of how religion makes ugly everything it touches.

It forces everything into simple binary choices: “deceptively simple” is right.

The entire right two-thirds of the graphic is dedicated entirely to Christian suppositions, asking questions that only matter to an evangelical Christian. The worldview of the ‘artist’ is all that’s explored here.

The left side does nothing but fuss over where the godless find meaning, as if that’s the most important thing we ever worry about. And then all it does is split everyone into categories…categories that are not mutually exclusive.

As long as we’re making flowcharts that are ugly, pointless, and simplistic, I thought I’d make my own, which is mine, which is far better than the one above.

I can take a suggestion. Here’s a prettier version of my flowchart.