Oh, not James Wood again. Wood is a literary critic who, like Terry Eagleton and Stanley Fish, dislikes those darned New Atheists on the strange grounds that they criticize a religious belief that weirdly cloistered literature theorists cannot and will not understand. I’ve already covered the pretentious follies of Wood at some length, and I don’t feel like doing it again (especially since Wood’s primary writing talent seems to be noodling along academically at excessive length — ‘spare’ and ‘lucid’ are not terms that will ever be associated with his writing style), but I will at least mention his latest, tritely familiar effort. Once again, he accuses the New Atheists of attacking an irrelevant religion that doesn’t exist, via anecdotes. Like this one, which we could call the parable of the One True Christian.

I met the religious affairs journalist, who had for several years been a parish priest. During the course of our conversation, he asserted: “It is impossible to be a serious Christian and believe in heaven and hell.” When I, who was raised in a strongly and conventionally religious home, expressed surprise and suggested that once one stops believing in heaven one might as well stop believing in God, he said, more vehemently: “It’s exactly the opposite: not believing in heaven and hell is a prerequisite for serious Christian belief.” Trapped in the childhood literalism of my background, I had not entertained the possibility of Christian belief separated from the great lure and threat of heaven and hell.

Please. Please, let this journalist or even James Wood come to Morris, Minnesota on a Sunday morning. We will sit and peruse this handy map of the town, in which the local churches are the primary landmarks, and he can pick any one of them that he likes: the conservative Evangelical Free Church on the west side, or the liberal Federated Church southeast of me, or the Catholic church a few blocks away, I don’t care. And then we will go there and declaim to the congregation the non-existence of heaven and hell, and see what kind of reception we get. There might be a few at the Federated Church that will go along with it — there are people who are the next best thing to atheists there — but anywhere else, and we will probably be accused of being satanists. If his religious affairs journalist is correct, then America is not a seriously Christian nation. 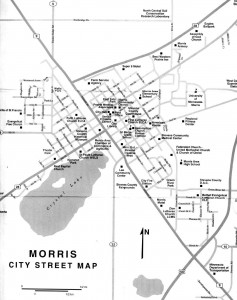 It is not simple-minded literalism to accuse Christians of believing in the divinity of Jesus, an afterlife, or sin and redemption. These are explicit claims made in the published creeds of almost all Christian faiths. Yet somehow Wood can hear one rather bizarre outlier in the spectrum of Christian belief and come to the conclusion that atheists have been railing against a strawman version of Christianity.

Wood is completely blind to what the actual practice of religion looks like, and he has this imaginary world of faith in which everyone is a peculiarly philosophical freethinker with mere sympathies for Christianity. And his understanding of the atheists he despises is even worse. This is his Dawkins anecdote.

There is an amusing clip on YouTube, in which Dawkins confronts Rowan Williams. Dawkins asks the archbishop of Canterbury if he really believes in miracles such as the virgin birth and the resurrection, happenings in which the laws of physics and biology are suspended. Well, not literally, says Williams. But, says Dawkins, pouncing, surely Williams believes that these are not just metaphors? No, says the archbishop, they are not just metaphors, they are openings in history, “spaces” when history opens up to its own depths, and something like what we call a “miracle” might occur. Dawkins rightly says that this sounds very nice but is surely nothing more than poetic language. Williams rather shamefacedly agrees. The scene is amusing because both men are so obviously arguing past each other, and are so obviously arguing about language and the role of metaphor.

Dawkins is dead to metaphor, and tries to annul it by insisting on the literal occurrence, contained in actual words, of the virgin birth and the resurrection. And Williams insists that such literalism misses the target, and instead has recourse to the metaphor of “event”, of a “space” opening up in history, an indefinably miraculous aberration. One feels sympathy for both sides – and perhaps simultaneously a plague on both their houses – because Dawkins seems so bullishly literal, and Williams so softly evasive. Contra Dawkins, God should be allowed some metaphorical space; but contra Williams, God’s presence in the world, God’s intervention, should not surely be only metaphorical. God is not just a metaphor.

“Dawkins is dead to metaphor.” Has Wood ever read anything Dawkins has written? One of the hallmarks of the explanatory power of his books is his use of powerful metaphors to communicate — if there’s any criticism to be made, it’s that his metaphors are sometimes too seductive (and sometimes they trap people who aren’t very clever: Mary Midgley, case in point).

I’ve heard this ‘metaphor’ defense of religion so often, but usually from theologians, not from unbelievers. I usually reply with one simple question:

You would expect a literary critic to understand the concept. A metaphor doesn’t just sit there, alone, looking pretty: it’s a proxy for a more difficult or unfamiliar idea, a way to introduce the reader to a new way of looking at something by relating it to something comfortable and old. So what, exactly, is the virgin birth a metaphor for? What does it help us understand? What is the actual underlying phenomenon being described by this peculiar insistence that Jesus’ mother had never had sexual intercourse, if not a literal claim that Mary ‘s vagina had never felt the intrusion of a penis? That’s the mystery here. Williams wasn’t able to explain it. So what good is this metaphor?

Try reversing it sometime. Confront Dawkins with one of his metaphors, like, say, the Selfish Gene, and ask him what he means by it. If he doesn’t just tell you to go read the book, he’ll be able to tell you it’s a metaphor for a gene-centered view of evolution that you can also find in George Williams’ book, Adaptation and Natural Selection, and that it refers to the selective propagation of replicators. It’s a simple language hook to get you thinking about the meat of his story, and he certainly won’t be as bewildered and lost as Rowan Williams on being asked to explain a key concept.

Dawkins wasn’t being excessively literal, and he wasn’t demonstrating a failure to understand the nature of a metaphor. He was being far more aware of the significance of metaphor than Rowan Williams and James Wood, and was trying to decipher actual meaning. Which, apparently, is irrelevant to Williams and incomprehensible to Wood.