Many years ago, a big tree was cut down to make way for a playground in a town near where I lived. I think the tree might have already been dead, but that doesn’t matter a whole lot for this story. A decision was made to turn the wood from this tree into a sculpture, and an artist was chosen. Now, art is subjective, and there are plenty of people who see beauty where others do not. I also have a lot of respect for anyone who is making a living as an artist in a world that doesn’t exactly encourage that. That said, the resulting sculpture was… odd. It sort of looked like two or three large wooden balls, with an almost melted-looking blob-like slab of wood draped over them. From some angles it was like an abstract turtle, from others, it was just… abstract and globular. If memory serves, it came with a poem, on a nearby plaque, about uplifting angels or something.

The town for whom it was intended considered it, and decided to give it to my grade school instead. The principal at the time absolutely saw the beauty in the sculpture and put it out in front of the school, plaque and all. In time, he left, and not long after the sculpture was rehomed to the far bank of the school’s fire pond, almost in the woods. To my knowledge, it’s still there, having gracefully grown into its role as a mossy abstract turtle thing.

On a related note another artist, whose taste I do not share, was apparently commissioned to make a sculpture for Boston Common, honoring Martin Luther King Jr., and Coretta Scott King. The resulting work was just unveiled, and, well, in the interest of fairness, I’ll show you the best angle first:

The sculpture, called “The Embrace”, is of the arms of MLK Jr. and Coretta Scott King, hugging each other, as seen in a famous photo I’ll post and describe below. The sculpture is just the arms and hands. You can see MLK’s hands in the foreground complete with jacket and shirt cuffs on the wrists, both wrapped around Coretta’s shoulder, with her arm extending down and away from the camera, elbow on the ground. One of MLK’s elbows is also on the ground, and you can see a third piece of the sculpture, presumably Coretta’s other elbow, touching the ground further back, giving the sculpture stability. The whole thing is big enough that an adult can comfortably stand under it.

So, again, I don’t like it. I respect the skill and creativity that went into it but, well, it keeps reminding me of the blob-turtle from this post’s introduction. So first off, there’s the photo that inspired this work of art. It’s a black and white photo of MLK and Coretta Scott King hugging each other. MLK’s arms are around Coretta’s shoulders, and her left arm is on the side of his chest. Her right arm, not visible in the photo, is presumably either on his shoulder, or lower on his torso. He’s wearing a white dress shirt under a jacket with three buttons on the cuff, as shown in the sculpture. 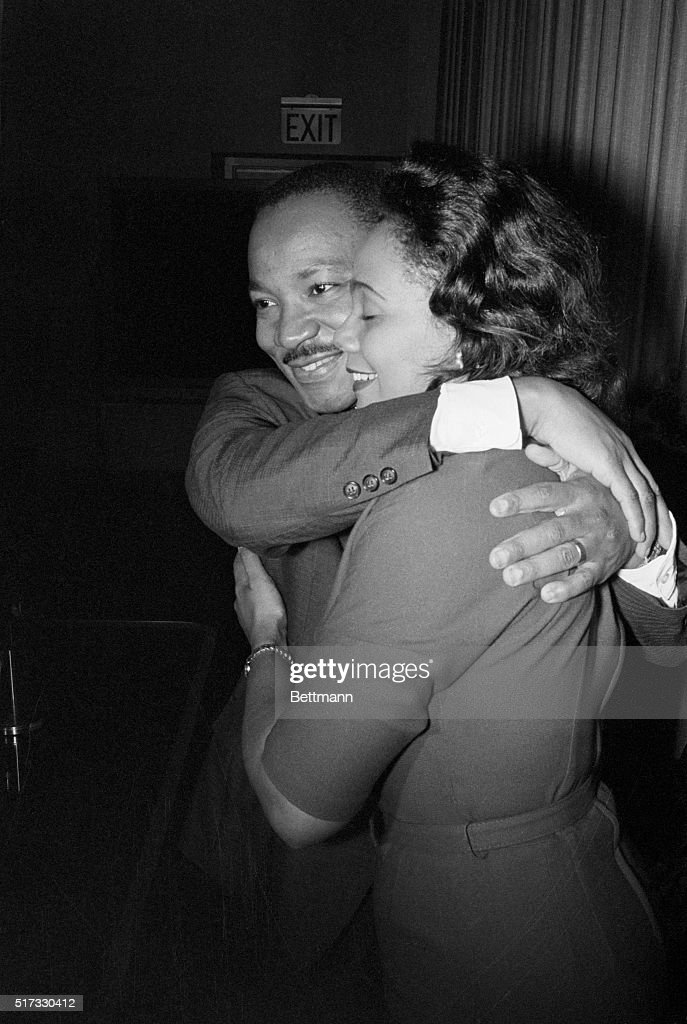 I feel like the artist maybe didn’t fully consider the visual impact of the piece from all angles, because: 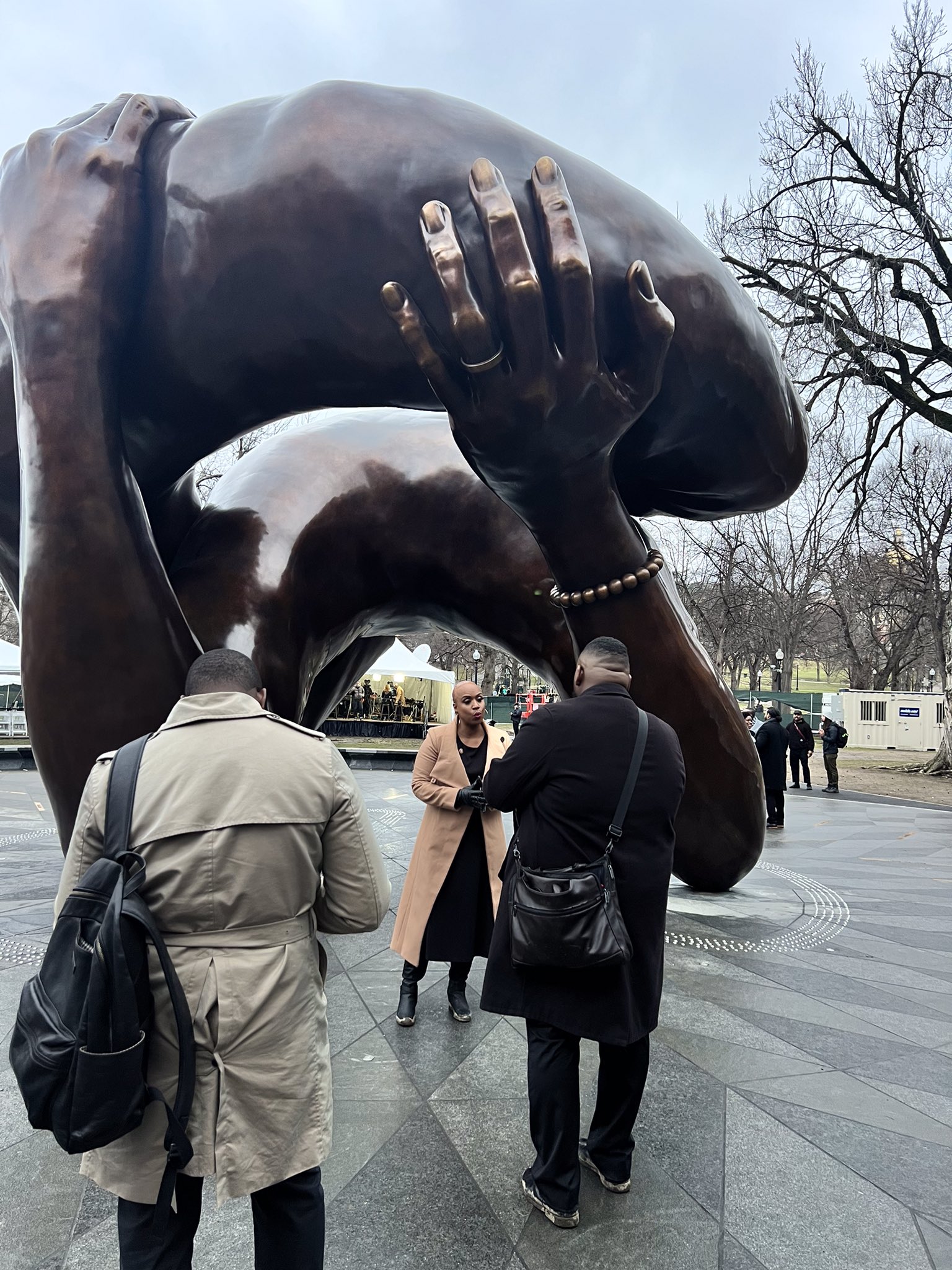 Ok, I can do this. The image shows Coretta Scott King’s forearms and hands, elbows on the ground, holding MLK’s arm and shoulder. You can see a beaded bracelet on her wrist, and a wedding band on her finger. Congresswoman Ayanna Pressley is standing in front of, and underneath where MLK’s shoulder would be, if this sculpture was of a whole person. Pressley, who’s a good sort as politicians go (I voted for her) is a bald Black woman wearing a long black dress under a long tan coat, with black leather boots that appear to have white soles/heels. In the foreground are two reporters with shoulder-satchels. The one closer to her is wearing a black coat, the one closer to the camera is wearing a beige coat. The problem is that MLK’s shoulder doesn’t LOOK like MLK’s shoulder from this angle. It looks like… well, a giant, curved eggplant. It’s a little lumpy, and because it’s so glossy, the reflections give it a degree of… apparent vascularity. Further back, where the torsos should be, you can see Coretta’s arms fusing together, along with MLK’s arms, into a sort of Cronenberg-inspired starfish kinda thing.

As long as we’re going to have heroes, Martin Luther King Jr. fits the bill pretty well. I don’t know if his talk of socialism and  wealth redistribution are, as is often said, why he was assassinated, but that would certainly fit the U.S. government position on those subjects. Personally, however, I don’t feel that this sculpture is the best way to honor him and what he stood for. Obviously, that’s not up to me, nor should it be. This is just my opinion, but it seems that this art is thrusting in the wrong direction.

As Tegan said to me, it could have been worse. There’s a history of bronze sculptures turning out to be disturbing monstrosities, like the efforts to sculpt Portuguese footballer Cristiano Ronaldo. The one thing I will say is that I’ll take a hundred more sculptures by whoever made this thing over any one of the remaining statues of slavers that are spread across the U.S. like a bronze-cast pox. I’d rather give that support to someone with a less… unique vision, maybe, but again, these things are rightfully not up to me.

Thank you for reading! If you found this post enjoyable or interesting, please share it around! Due to my immigration status, my writing is my only source of income right now, which is why I like to “pass around the hat” now and then for people’s spare change. Supporting me on Patreon can cost as little as three or four cents per day, and when enough people join in, even those $1/month pledges add up. There’s not currently much in the way of patron-only content, but my $5 patrons do have the option to name a character in the fantasy novel I’m currently working on, so if you like my fiction and want to immortalize yourself, or someone you know, then giving me money may just be your best option!