A mix of reality and “Western” propaganda have served to make U.S.S.R. and Russian intelligence services into something of a bogeyman – ruthless, effective, and with power that reached around the globe. This benefits the Russian state, of course, but it also serves to justify the existence, power, and murderousness of agencies like the CIA and MI6. Beyond that, it glorifies those agencies for “winning” the Cold War, and serves as a foundation for film propaganda like the James Bond series, or the excellent Atomic Blonde.

But as I said at the beginning, it’s not just propaganda, and it’s frankly hard to know the extend of any intelligence agency’s power. Within Russia, it’s pretty clear that opposing Putin is a dangerous thing to do. Outside of Russia, it seems there’s a very real danger, primarily to former agents of the Russian government. In 2006, Alexander Litvinenko, a former KGB and FSB officer who opposed Putin, was poisoned with Polonium 210. He had been granted asylum in the UK, but clearly that wasn’t enough to protect him, and honestly I don’t see how the same situation could be prevented in any other country. Likewise, in 2018, several people in the UK were poisoned with a “nerve agent” in the failed attempt to assassinate Sergei Skripal, one of whom died because of the careless way the assassins disposed of their weapon.

All of this is to say that it’s not unreasonable to claim that there’s nowhere on Earth that’s really safe for a high-profile Russian who opposes Putin and his decisions. It’s also not safe for “low-profile” Russians, as the recent wave of arrests has shown, but it seems like the more exotic attacks are reserved for those used to send a message. Fortunately, three Russians may have found a way to register their opposition to the invasion of Ukraine, where Putin can’t reach them. If nowhere on Earth is safe, then protest from somewhere off Earth!

Three Russian cosmonauts arrived at the International Space Station last night in flight suits made in the yellow and blue of the Ukrainian flag, in what appeared to be a daring statement against the war.

Oleg Artemyev, Denis Matveev and Sergey Korsakov blasted off from Baikonur Cosmodrome in Kazakhstan for a six-month stay aboard the orbiting laboratory yesterday, joining the crew of two Russians, four Americans and one German.

In an extraordinary move, the three new arrivals emerged from their Soyuz capsule after docking with the space station wearing bright yellow jumpsuits with blue stripes, instead of the standard-issue blue uniform. 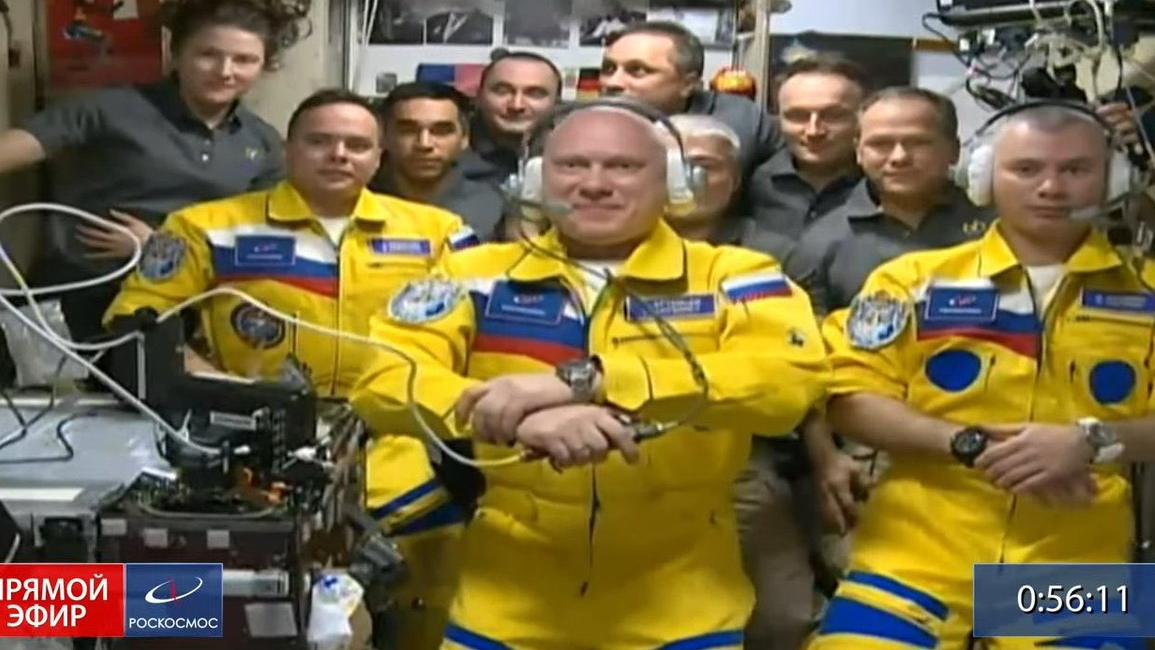 The cosmonauts claim that the yellow suits were because they just had a lot of yellow material around and they needed to use it up, but the Ukrainian flag is currently being used as a symbol of opposition to the invasion, and solidarity with Ukraine. That excuse reminds me of the men arrested for Skripal’s murder saying that they were just in Salisbury to see the clock at Salisbury Cathedral.  All jokes aside, they will need to come back to Earth soon, since staying in space indefinitely would result in a death that’s at least as bad as anything Putin might cook up. It takes guts to do something like this, even if you know that you’re safe for the next few months. It seems likely that this war is going to have lasting effects around the world, from its effects on food production and distribution, to the direct effects of war on those suffering it, to the shifts in politics and policy that are currently happening as a result.

In the meantime, I always like seeing unusual methods of protest, and this made me smile.

Renegade Cut: When were you radicalized? » « Let me snooze on, like a kitty in the sun