If you’ve ever moved far outside of the latitude to which you’re accustomed, you know how disorienting it can be to have day length change. My move to the British Isles had me confronting both the extremely long nights of a northern winter, and the surreal experience of realizing at 9pm that it was still about an hour before “night” started. I can only imagine how disorienting artificial light can be to creatures without the capacity to understand what’s going on.

When Tegan and I were working on our doomed application to live on the Isle of Rum, we were looking at even longer nights over the winter, and a community that had zero light pollution. As one of the world’s major breeding sites for the Manx Shearwater, every home has blackout curtains, so that the juveniles won’t get confused by artificial light, and head towards the village rather than down to the sea. There are also no street lights, or any other lights at night. One of the things I was looking forward to, had we been allowed to live there, was the night sky, when the weather allowed it to be visible. If you’ve never been far enough away from artificial light sources to see what the sky looks like without all that interference, I very much hope you’re able to experience that some day.

There are a lot of reasons why it would be good for our ecosystems to cut down on light pollution, but I think it’s also important to acknowledge that the bright lights of cities aren’t there just because of convenience, neglect, or aesthetic reasons. Places with high concentrations of people tend to have more crime, and crime is more likely to happen under cover of darkness. When I was in college, I attended a seminar on sexual assault in which we were asked to say whether we felt safe walking across campus at night, and how that feeling changed if one of the street lamps was out. The results were pretty consistent – most female-presenting people were not remotely comfortable crossing campus in the dark. That’s not an irrational fear, and it’s not something that we should discount in thinking about how to re-imagine our use of light.

It’s also important to note that not all places are going to have the same requirements, and those requirements are likely to change depending on the season. It may be that the ban on artificial light isn’t necessary outside of the month or two during which juvenile Shearwaters are heading to sea, for example. There may also be places where the potential for ecological disturbance is low enough that there’s no need for change beyond energy conservation. 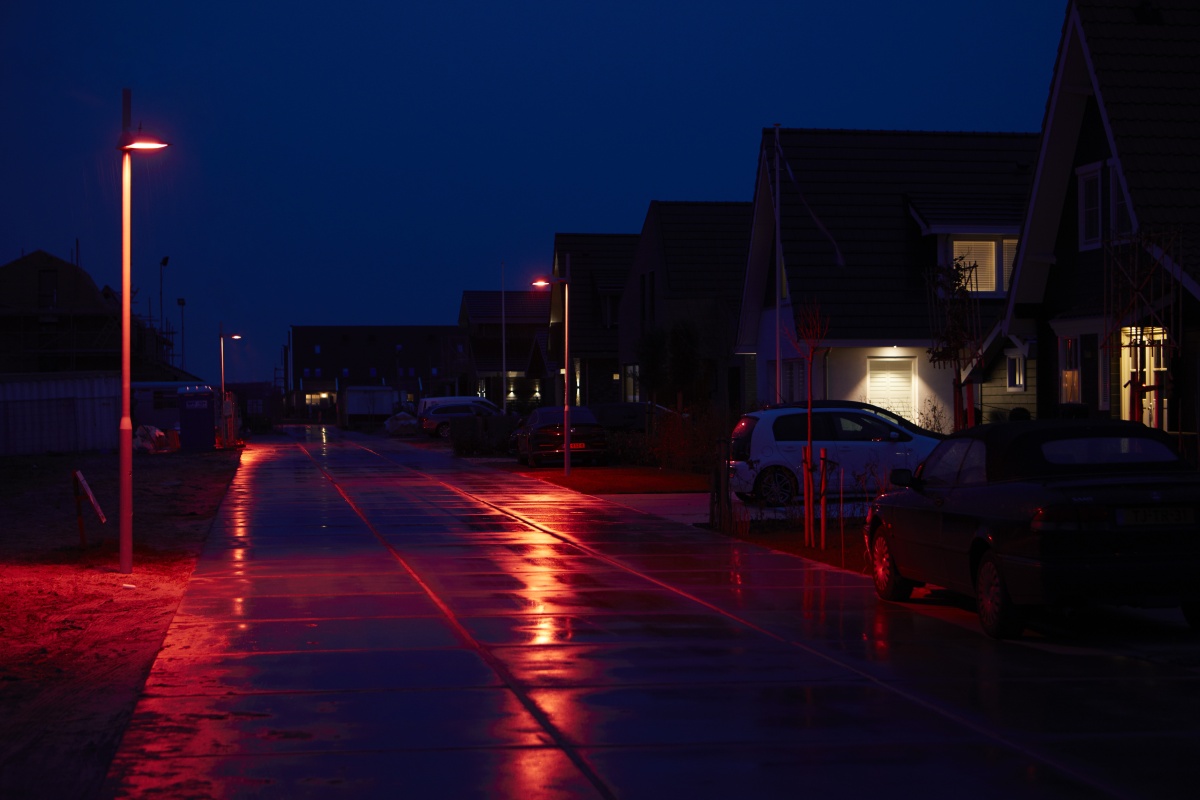 And in some cases, it may be that the only change needed is in the color of outdoor lighting. Enter the town of Zuidhoek-Nieuwkoop, Netherlands, that has installed red street lights, to be more hospitable to bats.

It turns out that while most insectivorous bat species don’t care a whole lot about artificial lights, there are some that care a great deal, and that face serious problems from the fact that not only do they need to go out of their way to avoid most lights, their prey tends to have the opposite reaction. That means that for these species, there’s actually less food they can access, even with stable insect populations, as the insects congregate around the lights the bats have to avoid. Red lights solve both of these problems:

Artificial light at night can have a disruptive effect on bats, but not if the light is red. Switching to red light may therefore limit or prevent habitat loss for rare, light-shy bat species. The latest issue of Proceedings of the Royal Society B publishes results from five years of pioneering research led by the Netherlands Institute of Ecology (NIOO-KNAW).
It’s the first time researchers have succeeded in measuring the effects of light with different spectra on the activity of slow-flying, light-shy bats in their foraging habitat. “We’ve found these bats to be equally active in red light and darkness,” says principal researcher Kamiel Spoelstra. “White and green light, on the other hand, substantially reduce the bats’ level of activity.”

The effect of red light on more common bat species such as the pipistrelle is reduced as well. Unlike a strong increase in activity of this species in white and green light, the activity in red light is comparable to darkness. This is caused by the strong attraction of insects to white and green (and not red) light. Pipistrelles opportunistically feed on these accumulated insects.

“The lack of effect of red light on both the rarer, light-shy species and the more common non-light-shy bats,” concludes Spoelstra, “opens up possibilities for limiting the disruption caused by external, artificial lighting in natural areas, in situations where having light is considered desirable.”

I don’t know if there’s any research into how the color of street lights affects safety for humans, but this is a great example of how we can put our understanding of animal behavior and physiology to use, and provide a service for humans – illuminated streets at night – that won’t interfere with the local wildlife, because the animals that might care about artificial light can’t detect those wavelengths. As always, it’s unlikely there’s ever going to be a “perfect” solution – perfection is more of an aspirational concept than an achievable goal – but there are many changes available that will help a lot, without causing us any real harm. It might be strange live somewhere that glows red at night, or to see the white wind turbines we’re used to replaced by purple ones, but we live in a world that’s increasingly alien to the on e on which we involved. I, for one, rejoice at the notion of building a new society that embraces that strangeness.

A useful video from the Gravel Institute on the future of work envisioned by Silicon Valley » « Geraldo Rivera got something right!