I wrote a lot of poetry in high school. Maybe, if enough people contribute to my patreon, I’ll share some of that with the world, but for now I’ll just say that I got a history teacher to accept an essay in the form of several pages of poetry, and it wasn’t exactly out of character.

I spent a lot of time in the woods, usually with a dog, tracking animals, wandering around, and generally enjoying wilderness. There are a lot of spots that still hold fond memories for me, but only one that became the subject of a poem – a stream that runs behind my parents’ home. It ran clear and cold, with an interesting assortment of frogs and newts, a pool that sometimes held a few young fish, and in the winter I could spend hours staring at the water making patterns under the ice, or following the tracks of the mink that ranged up and down the stream’s length.

And in the summer, it often dries up. I think that’s always been part of the character of that stream, but when I tried to write something other than comedic, doggerel poetry, that became the subject – what if it dried up forever?

What if I left home, and came back years later, only to find that it was gone?

When it comes to the emotions of climate change, I think it’s easier to feel when we have some connection to the land that’s changing, and the wildlife that inhabits it. For folks who’ve always lived in the city, a lot of that is likely to tie to things like sea level rise, or what birds or trees can live in the pseudo-desert of the urban landscape. For me, it’s the places I’ve been, and the ecosystems with which I’ve worked.

I’ve been lucky in that regard – I’ve had the privilege to see a fair amount of the world, and to spend enough time in various places to feel a connection to them. In the society I want to build, that’s an opportunity that would be available to anyone who wanted it. We have finite time on this fascinating planet, and artificial scarcity should not prevent anyone from seeing the planet on which we live.

I don’t think that stream is likely to dry up forever. It’s fed by seasonal rains, and while those may become less frequent as the planet warms, the storms that do happen will have more water in them. The stream will change, but it won’t vanish. The same cannot be said of other places. 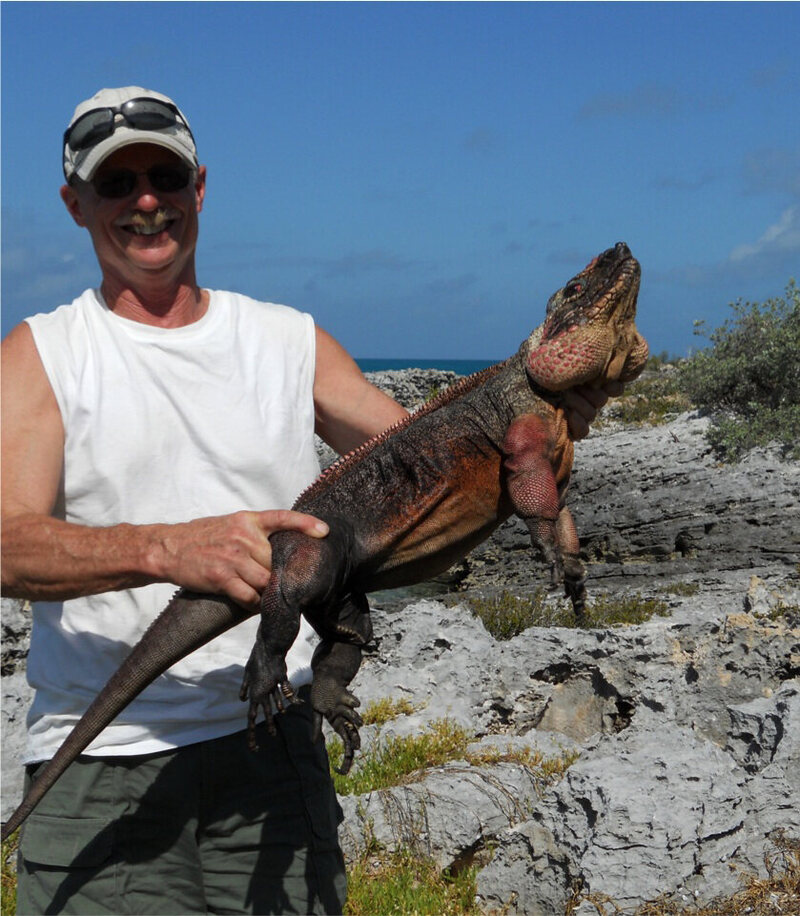 Dr. John Iverson holding a big’un. This one is larger than most of the ones I handled.

In particular, my mind is often drawn to a few tiny islands in the Bahamas, where I spent a week or so in college living on a boat and studying iguanas. For a kid who grew up watching nature documentaries and playing in the woods while my father counted plants, it was damned near paradise, even when I managed to end up with thorns buried an inch or two deep in my left thigh.

For about nine days, my full time occupation involved catching iguanas to help with a decades-long effort to study and conserve their population. My fellow students and I got to know the lizards well, and often paid for that privilege with bites and scratches. It remains one of my fondest memories.

And with current trends, rising sea levels may combine with big storms to wipe out that entire species before I die of old age.

Grief is a tricky thing. The death of someone we love is a pain we all feel, at some point. Losing a childhood home, or some other location that helped to shape us causes a different kind of grief. For some, features of the landscape can be as important to us as an old friend, or a relative who was there for us since we were born.

But unlike humans, the land endures, and we can find connection in walking the same paths frequented by those we’ve lost, or those who died before we could meet them. We can drink from the same stream as a personal hero, or stand on the same peak as an ancestor. We can add a stone to a cairn, as countless others have done, and know that long after we die, other people will contribute to that same simple, collective effort. Some of them might even be our children, or the children of our friends, or students.

The permanence of the world, relative to ourselves, is a form of conceptual immortality. It’s a continuity with the past, and with the future.

I know, of course, that there have been many drastic changes in human history, even within recorded history. Earthquakes, volcanoes, invasion and colonization – countless people throughout history have suffered the loss of their homeland, and mourned it.

But what we face now is different, even compared to the ice ages of pre-history. The closest humanity has ever come to a global flood was the expansion of ice sheets – great walls of frozen water, that brought wintry cold with them as they ground southward, and we had no choice but to flee before them.

But the other way? Heat? This is new, to us.

This is new to all the other forms of life with which we share the world. There may be exceptions in the deepest reaches of the oceanic abyss, but even the seas are warming, and the currents that stir those dark waters will change as the ice continues to melt at the poles.

And so we are burdened with knowledge of the future – with grief for losses yet to come. Those of us who feel tied to the rest of humanity, and who understand what’s happening, cannot help but feel the weight of the multitude whose lives could have been saved, had humanity acted sooner. We can see the islands disappearing beneath the waves, and the towering infernos of forests becoming deserts.

And because we are just animals, the loss of our habitat wounds us.

Much of that injury is still in the future, and the work needed to survive and improve as a species will increase as it happens. We will never really have time to simply grieve.

But even so, I think it’s important to acknowledge those feelings, and to honor them. They’re an integral part of what makes us who we are, as a species, and for some of us, that peculiar source of pain will be present for the rest of our lives, like the ghost of a loved one that will not rest. Living with climate change means living with its emotional impacts, and finding a way to incorporate those into our lifestyles, particularly if we want to continue working for a more just and peaceful human society at the same time.

This blog, and its associated podcast, are brought to you by my wonderful patrons, each of whom gives to me according to their ability, that my household might eat according to our needs. If you would like to stand in solidarity with these people, and help support the work I’m doing, you can head over to Patreon.com/oceanoxia to join the Oceanoxia Collective. You have nothing to lose but your chains, and as little as $1 USD/month!