(trigger warning for the last third, following “I wish I could have”: rape, incest, heroin, trauma) 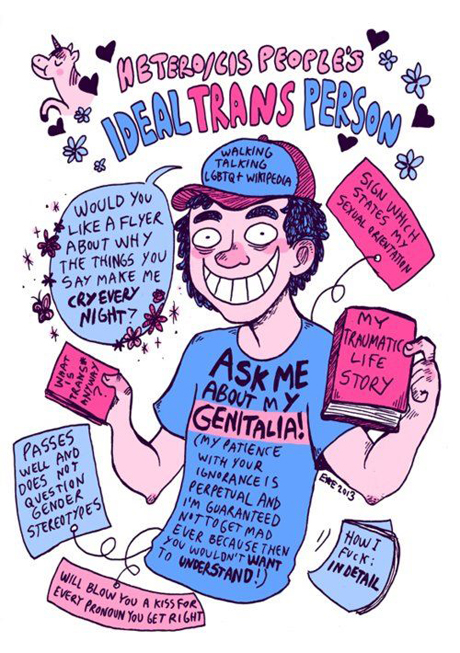 And I don’t trust them.

When they ask us to tell our stories, we know what they mean. They want us to tell the story they want to hear, and often the story they wish to tell. They want us to confirm their expectations and understanding, and to provide them with the juicy, sensational, dark, harrowing, brave and inspiring narrative they’ve come to know, and come to understand as synonymous with what a trans woman is.

It is impossible to extricate the concepts of transgender and transsexual from the narratives we’ve built around them, and attached them to. Which has all kinds of brutal consequences. We ARE the stories and memoirs, and the genres that define them circumscribe our identities.

There’s absolutely a genre for the life story of a trans woman. The Traumatic And Inspiring Transition Memoir. END_OF_DOCUMENT_TOKEN_TO_BE_REPLACED

Trigger warning for fairly obvious reasons. This was written primarily for the purpose of catharsis. Please take this warning seriously if you’ve struggled with addiction, especially opiates, and aren’t fully confident in your ability to handle evocative descriptions of such experiences, or if you’ve had traumatic experiences related to a loved one who was or is dealing with addiction. This is not meant to “glorify” heroin addiction, but is intended as an honest and personal account of certain aspects of its pathology, as I experienced it. “Down” is the common slang for heroin in Vancouver’s Downtown Eastside.

There’s a reason that generally, people refer to themselves as “recovering addicts”. Not recovered addicts. Not ex-addicts. Recovering.

Initially I kind of resented this, and I wasn’t the only one, thinking of it as mostly being a construct and a bit of a con set up by twelve step organizations, as part of the overall cult-mentality with which they’re run. It would keep the addict’s identity perpetually inseparable from the addiction (“Hi, my name is Natalie, and I am an addict”), hamstring their ability to move on with their lives, and keep them emotionally dependent on the groups and meetings. But in that initial distrust of the language, I was leaning into an assumption that there was some sort of “post-addiction” state, a place you could arrive at where you had in some real sense “moved on with your life” such that it no longer was in any meaningful way an aspect of yourself.

I’ve since learned that that assumption was a mistake, and at least for many people, no matter the distance you place between yourself and the addiction, it never stops being meaningful, or stops demanding attention. Once it’s there, it’s there, and you don’t get to forget.

At least for me. END_OF_DOCUMENT_TOKEN_TO_BE_REPLACED

I’m afraid I have to collapse the wave function on the whole Schroedinger’s Genitals thing I had going for awhile: I’ve not had lower surgery.

Hopefully, that won’t encourage any creepy love-letters (yes, something I’ve actually dealt with. More than once).

The reason I’m mentioning that very personal, and very uncomfortable-to-mention, information is that it’s important for the context in which I’ve been navigating a lot of complex issues lately. A few weeks ago, I was contacted very unexpectedly and out-of-blue-ishly by the people who handle the assessment process for those in the Vancouver/Victoria area of British Columbia who are pursuing vaginoplasty (aka SRS, GCS, lower surgery, bottom surgery, etc.), and they were asking to set up an appointment for the in-person interview part of the assessment. END_OF_DOCUMENT_TOKEN_TO_BE_REPLACED

It often strikes me that one of the most central means by which transgender identity, and the whole transgender mythos, as it exists for our culture, is held together is through narrative, “our stories”. The very concept itself seems hinged in a narrative progression, a story told in miniature even through the terms we use: “Male to female”, “female to male”, “assigned male at birth”, etc. Even the prefix trans, in defining us, places us forever in the action, the crossing. What we are being defined by a story of how we became… or, as the terms would have it, how we’re becoming, locked forever in the story arc, the transition, the transgression… male to female. END_OF_DOCUMENT_TOKEN_TO_BE_REPLACED

You probably don’t remember me. There’s a reason for that, and it’s basically about power. Not, like, “oh, dude, you’re so powerful!”, but just the sort of basic, day to day power-differentials that exist, between all of us, in accordance with things completely beyond our control, that have nothing whatsoever really to do with us. Despite the extreme reaction you had to my momentary presence (or would you think “intrusion”?) in your day, and the fact that without this reaction I likely wouldn’t have noticed you at all, you had a lot more power to affect me than I ever had to affect you, no matter how expressive your response.

I was walking down West Broadway earlier this week, I think near the corner of Blenheim, on my way back home from running some errand or other. Although given who and what I am I never quite have the luxury of feeling unguarded, I wasn’t really feeling especially apprehensive about my surroundings, this being mid-afternoon in Kits on a sunny day, and there’s only so much attention a person can maintain in being prepared for harassment. You were walking towards me in the typical lazily-confident stride of entitled young men like yourself that seems precisely calibrated to say “I don’t give a fuck” but mostly just says “I really desperately give a fuck about giving the impression that I don’t give a fuck”, and were dressed in the typical shapeless t-shirt-and-cargo-shorts uniform that suggests exactly the same.

We were passing on the sidewalk, and you presumably read me for trans. You sneered, spat at me in contempt, and then after passing by and not having to deal with anything uncomfortable like “eye contact” or whatever, shouted a single word, twice, with increased volume and emphasis the second time.

That word was “disgusting”. END_OF_DOCUMENT_TOKEN_TO_BE_REPLACED

There is a lot of me that genuinely cherishes who and what I am.

Often I find myself drawn back to the same, basic, long since tiresome and boring question… would I trade my life for a different one? Am I happy with the life I’ve been given? Am I okay with having been trans? Is that something I’d exchange for getting to have had the life of a cis woman?

The question is boring, yeah. It must have been asked uncountable times by now, even in this precise iteration, but beyond that, it’s a question that we all ask ourselves, over and over again, of the circumstances that have shaped who we are. We all have our burdens, or aspects of our histories that have shaped us in more obvious ways than others, and we all come back to the idea of whether this is something we’re simply living with and accepting because we have no choice, or something that we accept on a deeper level, something we can learn to love, all its hurt included. Probably because in so doing we can learn to love ourselves, the way genuine love embraces imperfection, understands it as inseparable from whatever makes someone… them. END_OF_DOCUMENT_TOKEN_TO_BE_REPLACED

Hang on, Natalie. Imagine how much sweeter your terrible, cheap, back-pain-inducing mattress will feel if you make it.

And then sleep ’til Monday. Wake up and then PARTY FOREVER BECAUSE EVERYTHING WILL ALWAYS BE GOOD FROM THAT POINT ON WITH NOTHING BAD EVER AGAIN.

I think I might be just about all used up in terms of things to talk about, or things I’m actually capable of talking about in my present state.

I wish there was some kind of grand, awesome, sweeping, thematically-unifying thing I could think of to write here, to somehow tie it all together, but I’m sorry, I just don’t have that. I barely even remember what exactly I’ve written about.

There’s a not insignificant chance I’ll want to just delete it all when I finally wake up. END_OF_DOCUMENT_TOKEN_TO_BE_REPLACED

The birds outside are being total jerks right now. You have like no idea.

Right now my brain is functioning quite strangely. Sleep dep and all. That stuff.

And as it happens, I’ve lately been questioning the concept of “neurotypical” lately. END_OF_DOCUMENT_TOKEN_TO_BE_REPLACED

This is the part of the evening where “thinking” sort of ceases being a viable possibility.

This is my Army Of Happy: 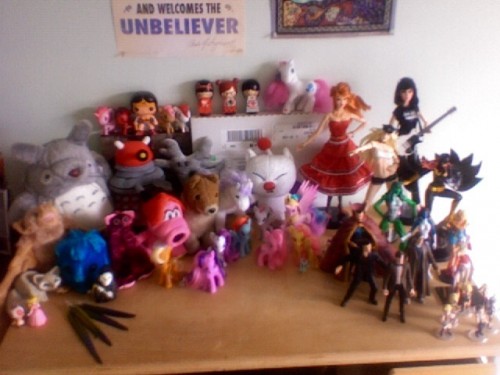 They help cheer me up during moments where I’m not feeling very strong. END_OF_DOCUMENT_TOKEN_TO_BE_REPLACED

It is pitch black. You are likely to be eaten by a grue.

Actually nodded off there for a second. NOT a good sign. It’s way too early in the night to start accidentally falling asleep.

One of the many, many frustrating questions us People of the Transitive Function are often asked is “but how did you KNOW?” END_OF_DOCUMENT_TOKEN_TO_BE_REPLACED