The rain has stopped. The clouds have parted. But now the sun is beginning to quietly nestle under the horizon.

I’ve taken my hormones and had a bit of chocolate. I may need some aspirin, though, if the headache returns.

On the plus side, though? 13 is totes one of my favourite numbers.

Here, have a flattering picture of me: 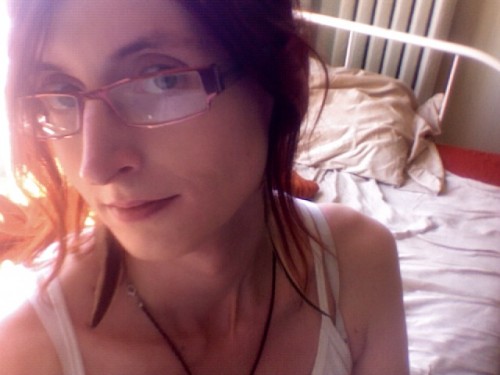 The thing was some late night chat host or another had made some awful joke to a guest saying that she “looked like a tranny”.

Amongst the usual criticism offered by the trans community to a majour media figure casually making a transphobic remark (criticism that seems to gradually get stronger over time, and hopefully will soon have the effect of discouraging these jokes before they’re made), Paris and others offered the extremely valid question of what, exactly, does a “tranny” “look like” anyway?

Usually when people claim a woman “looks like a tranny” they mean to suggest that she has certain kinds of masculine features, or that she’s possessed of an exaggerated and/or “fake” looking feminine presentation. But truthfully, trans women have a vast and diverse range of appearances.

Taken as a whole, as an aggregate perception, a trans women’s overall appearance can tend to be slightly distinct from that of the “average” cis woman. But in addition to the fact that, as mentioned in the previous post, the idea of a “normal” woman is illusory anyway, if you isolate given, individual traits for a trans woman, they don’t fall outside the range for cis women nearly as often as one might think.

In addition, there’s LOTS of different traits that comprise a human appearance. And there’s a tremendous degree of variety in how those traits appear in an individual trans woman. Even if, on average, we often to look a bit “distinct”, how we vary from the imagined norm is incredibly diverse. Trans women represent an extremely broad range of possible phenotypes, to such an extent that even if speaking strictly of visibly gender variant trans women, trying to imagine a “normal” or “average” trans woman, “what a tranny looks like”, is completely absurd.

All those traits taken together… that’s something quite rare amongst trans women. So how do you pick and choose which she does and doesn’t have? Already it would start to break down.

And imagining this “normal” trans woman, “what a tranny looks like”, what race is she? How old is she? How does she dress? Has she had any surgeries? Which ones?

Do you see what I’m getting at?

As anyone who regularly reads this blog probably knows by now, trans women are often completely visually indistinguishable from cis women (and often also indistinguishable in our voices and mannerisms… and one of the cool things about HRT is that it makes us smell exactly like cis women do, as well as our skin having the same tactile feel). How does THAT factor into “what a tranny looks like”?

If one of the possible types of appearances a trans woman can have is one that is not in any meaningful way distinct from a cis woman, what meaning does “look like a tranny” even have? And truthfully, a “passable” trans woman doesn’t “look cis”. What she looks like is one of the ways that trans women happen to look. It is only people’s ignorance, treatment of cis as the universal default condition, and failure to account for the fact that trans people are a part of the world, that leads to such women being interpreted as cis.

That overlap, by the way, is very, very large.

There is no “way” that a trans person looks. A cis woman CAN’T “look trans”. It’s about as silly as saying an asian person “looks white”.

Try imagining “what a cis person looks like” and you might get an inkling of the absurdity here.

What we look like is only ever, and exactly, ourselves.

The great thing about Paris hashtag was scrolling through the pictures and observing the amazing, beautiful diversity of #WhatTranssexualsLookLike. As a group, we look like humanity. Which is really, intensely beautiful.

I suppose, in that sense, it could be taken as a compliment when someone says you “look like a tranny”. It just means you look like a human being. A beautiful, individual human being.