Well, here we are at the halfway mark, and I’m afraid I’ve begun to develop a headache. A quite nasty one, too.

Also, it looks like we haven’t pushed much further towards our goal today in donations. Come on, guys. We should AT LEAST be able to break the $90,000 mark this evening! If you’ve been following along with my blogathon but haven’t tried donated at least a wee bit to the SSA, I’m sad to inform you that this “no skateboarding” sign is very, very disappointed in you: 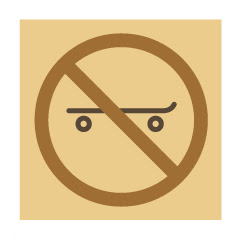 So I was mentioning how the darling, beautiful Benedict Cumberbatch was in my dreams last night.

As most of the geeky sorts who read my blog likely already know, Cumberbatch plays Sherlock Holmes in the BBC’s “Sherlock”, an adaptation of the Arthur Conan Doyle’s Sherlock Holmes stories set in 21st century London. It’s really quite, quite good.

One thing that always did sort of bug me about Sherlock Holmes, though, is the misapplication of the term “deduction”.

What Sherlock Holmes does is decidedly NOT deduction. What he practices is abduction. Or what is more commonly known as “guessing”.

He deals with probabilities. He observes his surroundings, notices salient or important information, and then GUESSES at the most likely explanation for why things are the way they are. But since they are almost never the ONLY possibly explanation, they aren’t “deductions”.

Now, this might seem like a silly little nitpick about semantics, but it’s actually something I consider extremely important to how we approach, and question, the world around us. Something that is actually very important to the specific kinds of issues I deal with.

You see, Sherlock Holmes could never actually exist and function in the real world the way he does in fiction because the real world is just too infinitely complex for those guesses, abductions, to be consistently correct or even roughly reliable. He would make mistakes CONSTANTLY… not because he couldn’t be that smart, but because the world is never that reliable in being probable. Sherlock Holmes could be every bit as intelligent as he is portrayed in the series, and could even be MORE intelligent than that… he could basically be a ludicrously advanced computer designed to constantly, instantly calculate the most probable explanation for everything around him and he would STILL be wrong too often to be reliable.

Improbable things ARE improbable. But when speaking of, well… everything around you, you get into “really big numbers” territory. In a situation reflecting a million different questions (and really, even the room you happen to be sitting in right now presents an ENORMOUS number of question, in terms of accounting for every observation that could be made about it and everything that’s in it), the probability of one of those questions having a “one in a million” explanation becomes quite likely.

All things considered, it would be far, far, FAR more improbable for everything to consistently have the most probably explanation than for them to quite often have improbable explanations. When speaking of the world itself, infinitely complex as it is, improbability is actually more probable than probability.

This is why coincidences can often seem to occur more often than they “should”. Out of the thousands of things that happen to you in a given day, a lot of them ARE going to be improbable in their explanations or how they work out or whatever. If you isolate a specific thing, improbable is still improbable. But when you’re allowing, well, EVERYTHING to be up for grabs, yeah, there’s going to be a lot of weird, chance things going on.

The first episode of Sherlock itself hints at this, suggesting a little bit of how the actual world works. Upon meeting Dr. Watson for the first time, and momentarily borrowing his phone, he “deduces” an immense amount of detail about his life. He guesses that Watson is a military doctor recently returned from the middle-east with a psychosomatic limp who is in need of a new apartment due to financial struggles, and is becoming desperate, since he refuses to accept help from his recently divorced brother due to pride and an ongoing quarrel between them over the issue of his brother’s alcoholism.

Sherlock gets everything right, except one detail. It’s not a brother, it’s a sister. She’s a lesbian, and the name “Harry” is short for Harriet. Sherlock remarks “It’s always SOMETHING!”

This is a small look at what a detective like Sherlock would constantly encounter in the real world. But it wouldn’t always be something. It would always be lots of things.

The reason this is important is because as we go through life, making decisions, allocating our attentions, time and energy, coming up with theories, trying to help people, whatever… we often base our decisions on a model of the world based on what’s likely, what’s probable, what’s common. But such models don’t reflect the actual world.

The actual world is a world of variance and diversity and improbable occurrences. A world of lesbians named “Harry”.

I’m a confluence of improbabilities. Transsexuality is rare. Green eyes are rare. Hungarian ethnic backgrounds are rare. Heroin addiction is rare. Intersexual characteristics are rare. Etc. etc. etc. But that doesn’t make me The Most Specialist Person Ever. It just means I’m isolating a few variables that ended up with improbable results out of the THOUSANDS of variables that comprise a human being. Most of which, for me, are nice and “normal” like “everyone else”.

And the thing is, most people are like that. Most people have at least a few rare or improbable traits. What would be TRULY rare is a human being comprised utterly and completely of only the most probable, “normal” characteristics in every conceivable way.

This is why normativities are so illusory and fleeting and inadequate. They don’t benefit actual human beings. Who they benefit is just a ghost. A weird, Platonic mapping of everything we, individually, swerve away from simply by virtue of being.

The only place there’s a “normal” is in our heads. Or, I suppose more tellingly, “normal” is only ever really embodied in contrast to who we really are.

If our models are to be meaningful, they have to be models that understand the nuance, unpredictability, and rich diversity of our probably improbable realities.