In the Snopes group on facebook, a man named Michael McLaughlin published an interesting correlation of data. He compared the rates of gun deaths in 68 countries versus the wealth (GDP per capita) of each. Wealth is directly related to the education of a country, whether as a cause or an indicator.  His graph shows a strong correlation between wealth and a low gun death rate, and poverty with a high gun death rate, with the US as the biggest exception. 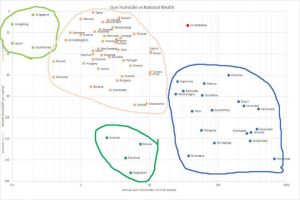 Naturally, gun fondlers are taking exception to the correlation, saying “it proves nothing”, that “the logarithmic scale makes it invalid” or that “it’s wikipedia, so it can’t be trusted”.  Wrong. Wealth accumulation is logarithmic because of the multiplier effect; countries with more money to spend and more economic flow creates more wealth, while poor countries have lower cash flow and lower multiplier rate.  And claims can be verified by data from trustworthy sources (see below).

Of the 68 countries shown, there are only five outliers:

Ukraine and Moldova have strong gun control on paper, but there is a lot of gun smuggling from Moldova to feed Ukraine, feeding the latter’s civil war. How many personal murders have been attributed to war would be hard to calculate.

Kyrgyzstan’s government is unstable, both its leadership and civil authorities. Violent crimes may be underreported; crimes against women rarely are or are dismissed by the police (e.g. bride kidnapping and forced marriage). Despite claims of being a democracy, ethnic repression, violence against women and LGBTQIA people are common, so the numbers of gun deaths may not be accurate.

The fifth outlier is, of course, the US with its massive wealth but little or no gun control and abnormally high rates of gun deaths. Gee, you don’t think these factors could be related, do you?  Wikipedia is a lousy and not credible source for information, so I checked for others, courtesy of the Snopes website, the excerpt below from The Guardian. Credible and independent sources exist for the same data found on wikipedia, so McLaughlin’s correlation is valid.

The UK Guardian newspaper ported comprehensive gun homicide numbers onto a spreadsheet in 2012 based on then-recent data compiled by the United Nations Office on Drugs and Crime (UNODC) culled from various agencies worldwide, and that information enabled readers to more meaningfully assess how the U.S compared to other countries in terms of the actual rate of gun homicides. The combined data provided a total per capita gun homicide rate for the U.S. of 2.99, which ranked it behind 27 other nations (including Brazil, Puerto Rico, Honduras, and South Africa).

That does not excuse the US’s ludicrously high rate, it damns it.  Liechtenstein (2.82 gun deaths per 100,000 people) is the only country in the world with wealth and a gun death rate comparable to the US (almost three times the US GDP per capita), but its population is so small (under 38,000) that its one gun death is statistically irrelevant. Even the West Bank & Gaza (2.95) has a lower rate than the US (2.99).

Excuses Excuses: A hollyweird mogul’s operandi » « Shells Fall: They are not the hollow men