A substantial body of data attributes medical errors to interactions among hospital workers. Calls for improved patient safety gained traction from the late 1980s through the early ’90s, when Australian researchers reported a shocking find: the vast majority of medical errors, some 70‑80 per cent, are related to interactions within the health care team. In the early 2000s, a report by the Joint Commission that accredits health care organisations in the US studied adverse events over a 10‑year period and discovered that communication failure was the number-one cause for medication errors, delays in treatment, and surgeries at the wrong site. It was also the second leading cause of operative mishaps, postoperative events, and fatal falls.

The link between harsh words and medical errors was reignited in 2012 when Lucian Leape, professor of health policy at the Harvard School of Pub­lic Health, published a two-part series in Academic Medicine. ‘A substantial barrier to progress in patient safety is a dysfunctional culture rooted in widespread disrespect,’ Leape and his co-authors asserted. ‘Disrespect is a threat to patient safety because it inhibits collegiality and co-operation essential to teamwork, cuts off communication, undermines morale, and inhibits compliance with and implementation of new practices.’

3. This appears to be an evidence-based eating disorder app. [!!!!!!] (I’ve downloaded but not had a chance to play too much.) There’s also a version for clinicians! 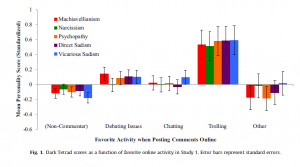 4. Research into internet trolling: exactly as terrifying as reading the comments sections on your average news site would have you believe. Identified trolls scored high on psychopathy, sadism, narcissism (caveat: I’ve not been terribly impressed with previous measures of narcissism), Machiavellianism. You know, exactly the sorts of people you want clogging up the conversations.

I’m going to take a moment here to be thankful for first time comment moderation and you, thoughtful readers.

5. While I adored the Harry Potter books, I fell into a common pattern–I admired and identified with Hermione and saw Harry as the protagonist. Ron? The sidekick. This defense persuaded me that I’ve done a grievous wrong.

So what about Ron? He actually tends to a very clear gap in the ranks—providing a sense of family unity and street smarts. While Ron himself may often feel crushed by the burden of familial expectations, he extends the closeness of the Weasley clan to his friends both figuratively and literally. Harry and Hermione do both eventually become members of his family through marriage, but more importantly, Ron always treats them as blood. It’s there in every holiday Harry spends with the Weasley family, with that first sweater Harry receives on Christmas, and the unconditional love Harry and Hermione are both offered only because Ron’s family know how much these children mean to their son. I mean, he steals the family hover-car with the help of the twins because he’s worried that Harry is being held hostage by his abusive relatives. That knight parallel from their mega chess battle is looking more and more apt.

Abortion opponents have been pushing the idea that abortion hurts women, that they feel regret. With 1.3 million women having an abortion every year, it’s likely that a certain number do feel regret. That’s the natural curve of any kind of big decision. What we want to know is: Who are those women and what do they need?

7. Ehlers-Danlos Syndrome is a disorder of collagen, making connective tissue or skin weak. These functional-but-decorative finger splints are gorgeous and creative. Too often, assistive devices are designed to hide, instead of taking advantage of their position as eye-catching accessories.