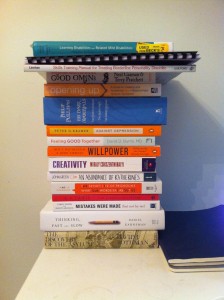 I asked for books for Christmas. In fact, I got books and money-for-books for Christmas. And not just a novel or two…several shelves worth! And then I got back to school, and found myself with fourteen books to order between just two of my classes. And suddenly, I had a Book List of Formidable Size.

This is what I’m reading in the next ten weeks. They’re roughly sorted by classes and interests (Feminism, Social Policy, Psychology, Not-Psychology) and suggestions and commentary are highly encouraged! I don’t anticipate posting reviews, though the first half–the books for school–will likely inform the next weeks of writing.

Fear of Flying, Erica Jong
This is a romance novel, and it was assigned for class. A quick search about suggests things about changing the face of feminism? Or resonating therein? I’m sure I’ll find out. The second heading in the Wikipedia entry is for the zipless fuck, so I’m sure it will be dignified and stodgy reading material on the topic of pteromerhanophobia.

Woman on the Edge of Time, Marge Piercy
I…I am really not sure why this was assigned for my feminism class, but hey, it’s got sci-fi undertones and a female lead, so why not?

Ain’t I a Woman: Black Women and Feminism, bell hooks
Yep, bell hooks. Another feminist writer I’ve never properly read. Academic pressure to catch up on necessary reading + needing a specific sort of gen. ed credit = 90% of what caused me to enroll in this class. And 100% of my prior knowledge of this book comes from quotes floating about tumblr, so at the very least I can source-check those!

Asylums: Essays on the Social Situation of Mental Patients and Other Inmates, Erving Goffman
Goffman is fairly famous (by which I mean he’s the sixth most quoted author in the social sciences) but my experience of the last book I was assigned that he’d written (Stigma) was…ah…dense. Not impossible to understand, but dense. Probably in part because Goffman coined the term itself, and much of the conclusions he was drawing (people are stigmatized! sometimes they have passing privileges! stigma can intersect with other identities!) didn’t seem new or revolutionary. Anyways, I have to read it, and I’m told that the book lead to the deinstitutionalization and changes in psychiatric care. Also, I’m a sucker for case studies. (I am overly fond of Oliver Sacks’ writing, it’s true.)

The Discovery of the Asylum : Social Order and Disorder in the New Republic, David Rothman
How the hell did we end up with prisons and asylums and how did we sort people into each? I have no idea, but apparently I’m going to learn! That is, if my massive textbook order actually arrives.

Stateville: The Penitentiary in Mass Society, James Jacobs
A case study (see: Kate is a sucker for case studies) of an Illinois high-security prison–prisoners, guards, administrators.

The Homeless, Christopher Jencks
Not content with tackling the easy stuff, we’re looking at questions like “why are people homeless?” and “how do we fix it?”

Is There No Place on Earth For Me? Susan Sheehan
Case study (need I say more?) of a young woman with schizophrenia as she goes in and out of mental institutions. Near and dear to my heart–I worked briefly in schizophrenia research/case work.

Losing Ground: American Social Policy, 1950-1980, Charles Murray
Did welfare in the 60’s do more harm than good? I have no idea, but Murray has arguments for it. It’ll be an adventure! (Especially since this class has me reading eight books in eight weeks.)

In 1997, then state Senator Barack Obama sponsored legislation in the Illinois General Assembly to study the newly passed federal welfare reform and how it would affect the citizens of Illinois. […] Dan A. Lewis was selected to direct the study and report back to the legislature. For four years, Lewis and his team of researchers tracked a random group of 1,000 people who were on welfare when the new law went into effect. He reported on their income, their general well being, and the lives of their children under the new system. Gaining Ground in Illinois illuminates the findings of the study and offers advice for future policy makers. Lewis uses quantitative and qualitative data to draw clear conclusions but also to make the real experiences of the people he studied as vivid as possible. The reports allowed the legislature to debate the issue with the facts at hand.

Making Habits, Breaking Habits, Jeremy Dean
(1) I want to have better habits, and to make some things I force myself to do (plan meals, drink enough water) to be non-conscious habits.
(2) It would appear that everything I know about habits is completely wrong.
…and (3), I learned (2) from one chapter in, with lots of spiffy new research to explore. Twenty-one days to form a habit? Yeah, no, and how did we get that number anyways? Turns out we pulled it from a doctor who noted that it took 21 days for amputees to habituate to having a missing limb, and then generalized wildly. Not exactly the same as taking a walk after dinner, no?

The Secret Life of Pronouns, James Pennebaker
Social psychology about how we communicate? *Swoon* I actually borrowed a copy of TSLoP this summer, but only made it a few chapters in. A friend gifted me this copy, and onwards we go. Play around with this quiz to get an idea of the research and claims Pennebaker is pulling together.

Listening to Prozac, Peter Kramer
A well-known-ish popular psychology book that I keep hearing people reference. I’m overly skeptical–the blurb wonders if Prozac work on character rather than illness–but that might be gimmicky publishing. All things considered, I need to have a better idea of the popular-writing-on-psychiatry.

Against Depression, Peter Kramer
Pennies and pounds and all that–I picked up Kramer’s other book. It seems less sweeping: who has depression, and what’s that like?

Thinking, Fast & Slow, Daniel Kahneman
Kahneman’s work on decision-making is worth reading. MegasuperADJECTIVE worth reading. None the least because it’s a nifty shorthand for categorizing feelings in conversation. (“My System 2 knows that this is stupid and completely untrue, but my System 1 is having a lot of trouble with not feeling like I deserve to eat.”)

Creativity: The Psychology of Discovery and Invention, Mihaly Csikszentmihalyi
You know when you get completely caught up in a task and time flies by? You’re working and passionate and impossible to distract? That’s called ‘flow’, coined by Csikszentmihalyi and I haven’t been feeling it. Or the creativity. Which brings us here.

Feeling Good Together, David Burns
I’ve read When Panic Attacks, and I keep suggesting Feeling Good to other people (confession: I’ve only skimmed it.) Though When Panic Attacks didn’t give me new information, I have nearly no knowledge about tackling troubled relationships (the topic of FGT). Marriage/Family Therapy is definitively out of the picture in my future-planning, but Burns writes clearly, if basically.

Willpower: Rediscovering the Greatest Human Strength
I have an odd affection for Baumeister, having once given a very long presentation about why I thought he was wrong. I’ve never read any of his non-academic publications, and since everyone seems to have very certain and completely opposite ideas about how willpower works, I’m starting with the book I hear people citing most in casual conversation.

…is a well populated and only-sort-of-joking tag on my tumblr. I’m sucker for manuals–the how-to handbooks for some therapeutic techniques. (Not all use them–for instance psychodynamic and existential therapy tend to be far more freeform, and intentionally so.) Linehan is a hero of mine (here’s why), and a post I’ll write another day.

The Golden Compass/The Subtle Knife/The Amber Spyglass
I’ve taken too long to read the His Dark Materials books. But! Good news! You all were exactly right about how fantastic they are. I’m halfway through The Amber Spyglass.

Good Omens, Neil Gaiman & Terry Pratchett
Finished today! 10/10 would reread while laughing too loudly at demons and angels and the Hellhound.
“He rather liked people. It was a major failing in a demon.”
Really, need you know more?

An Abundance of Katherines, John Green
The only reread on the list–and the only John Green book I’ve read. Boy genius dates 19 Katherines  in a row. Now what? Adventures and sarcastic footnotes, that’s what! I know people have unreasonable attachments to their names–enough that we’ve named the effect and designed a test for it…and yeah, this might have been why I liked the book. Emmas and Matthews and Jameses of the world, let me know if I’m biased?

Hyperbole and a Half, Allie Brosh
Because comics drawn in MS Paint have never been so great.

What should I immediately devour? Turn into kindling? What are you reading?