The laws of the USA are profoundly generous to liars and con artists.  I don’t know from legal history, but some court said there could be “common sense” limitations on freedom of speech, like “no shouting fire in a crowded theater.”  I could google that easily enough but whatever.  I bring this up because the problem is not alerting people to fire, it’s unnecessarily causing a stampede when there is no fire.  The problem is the lie.

What do you charge that liar with?  Reckless endangerment?  Malicious mischief?  Anyone who has ever lied about covid for political or financial gain should have spent time in handcuffs.  Of course, a creepy enough liar can believe almost any lie they tell, at which point, is it a lie?  That would be a common defense if we ever arrested people for that shit.  “What?  I really believe the vaccine helps them control you with the 5g.  Prove I don’t believe it.”  I don’t know how to deal with the actual prosecution of such cases.

But there are no such cases in the first place, no consequences for telling world-ruining lies, literally strangling a million people to painful miserable death with your flaming bullshit.  Those lies lead to lies lead to lies, a circular firing squad of fascist dreamers creating a world of illusion.  And now we have honest, earnest true believers in these lies.  People who believe in antivaxxing like they believe in jeezis.

In my day job I hear their stories.  One woman had a health problem blood clottish and blamed the vaccine.  One man’s wife took the shot and died from a stroke, perfect health before that he says.  She took the shot and he didn’t.  His faith affirmed, he will one day have a chance to lay in a hospital for a month with his body ravaged in unimaginable ways, his lung’s function replaced with machinery while they run out the clock, if that hospital doesn’t have to triage his ass straight to hell.

Because this lie was sold with conservative cultural identity, most of the victims are fascists, and I can’t feel too bad for them.  Lest we forget, 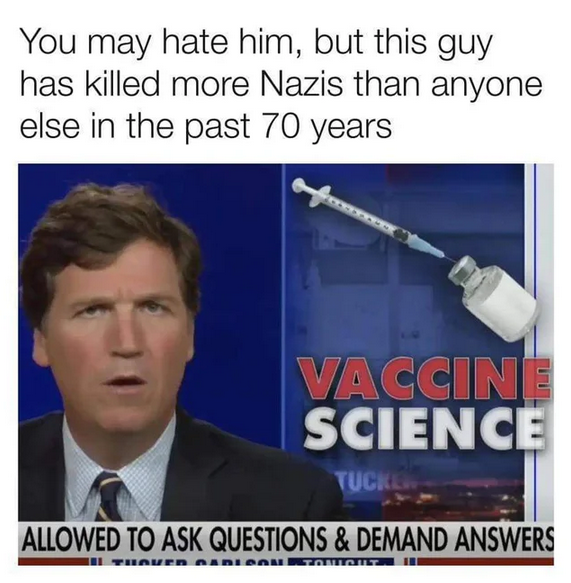 But it isn’t only fascists that buy these lies.  Mainstream anybodies can be swept up in memes and swindles, and they are – great swathes of them.  I don’t know the numbers but I do know a lot of people in this fairly urban part of a blue state are complete rubes about this shit.  People I know, people I’ve known.  They’re at a risk of death and at a risk of killing people they care about, not to mention all the people they don’t know or care about.

This could have been stopped by aggressive laws against demonstrably dangerous lies.  But politicians on both sides of the aisle, plus the corporate world (and all the incestuous crossover between the two) benefit from dangerous lies just often enough that they don’t want to take that tool off the table.  Freedom of speech is freedom to lie.  Any policies we currently have against that are defanged or shot full of loopholes that are barreled through by fuckers in monster truck convoys from sea to shining sea.

I’d just love to see people like the pink-faced sack of shit in that picture purse their lips and wonder – will this be the one that sends me to the penitentiary?  Please.