Here’s the rest of the month, 12 days late. I’m not going to put a proper visual caption on these. They’re OK for a bit of visual distraction if you can see, but they just aren’t worth the effort to describe. It’s so much digital ephemera. For this (my first) Inktober, I combined the Monsters & Mythology prompts plus the Official Prompts.

Going with the spirit of Inktober I didn’t allow myself much digital work. For example, I allowed myself no additional strokes or distortion / warping – though I broke the distortion rule for the image of the “Zmey.” I don’t have every color in the universe, pen-wise, so I did allow myself subtle use of adjusting contrast, hue, saturation, brightness. I felt some drawings looked too spare without a base color, so I added a fill or gradients to those.

You can still tell I did the under-drawing for all of these with a yellow sharpie, so I couldn’t erase it. I think that kinda stuff looks fun in a drawing but I know some people hate it, so sorry about that. In this batch, I put more effort into disguising that somewhat with color replacement on a number of the pictures.

As I got through the last half of the prompts, my content got a little more creepy. Let me know if anything was too much. Proceeding thus, 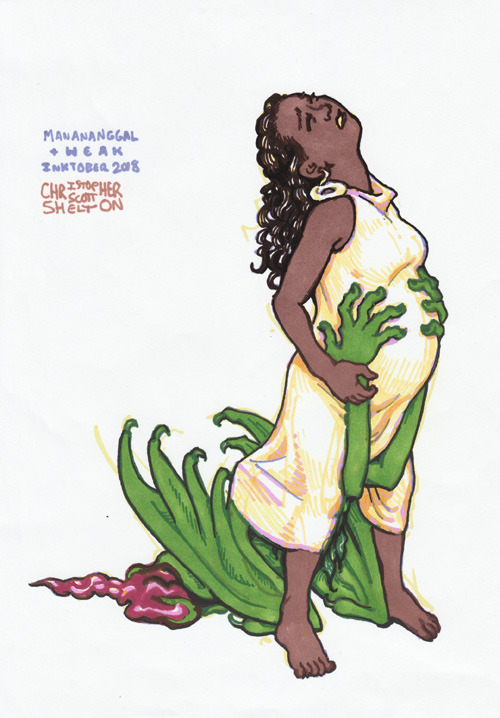 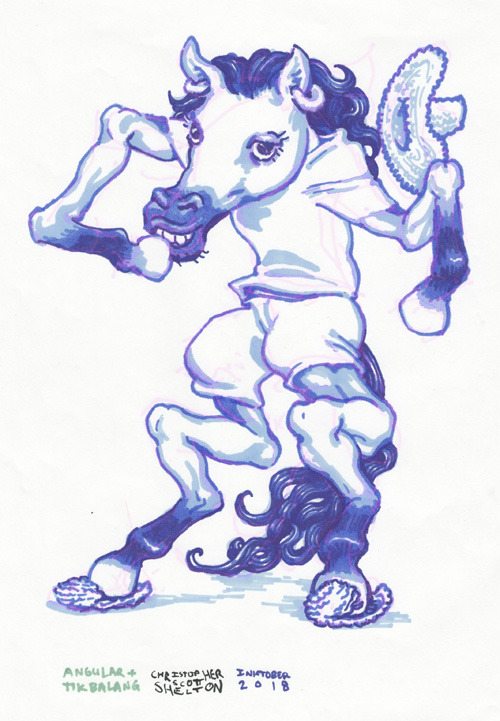 This is “Tikbalang” + “Angular.” I like this guy a lot. I have a feeling of yokai that they have a barely restrained urge to scare people, like funhouse employees gone wild. This monster from the Philippines had the same feeling for me. As an outsider to both those cultures, let me know if that’s wrong in bad way. 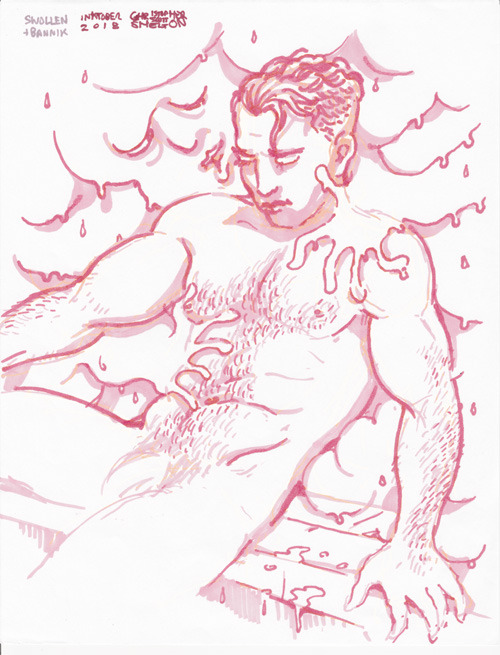 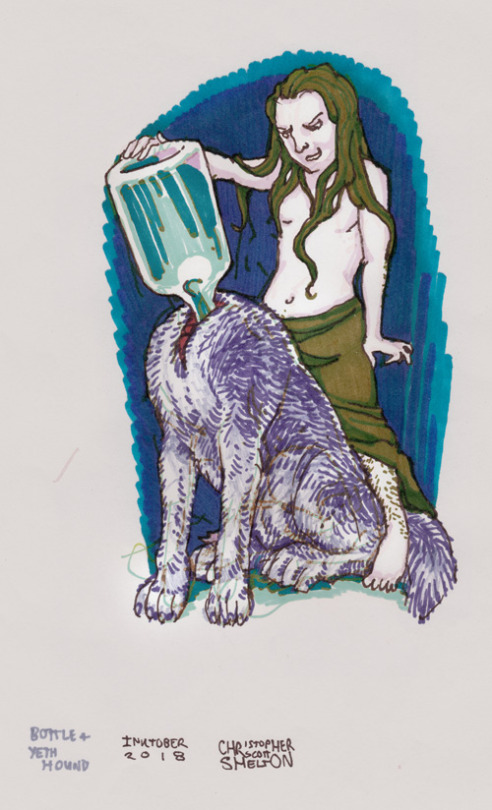 This is “Yeth Hound” + “Bottle.” A yeth hound is headless and makes scary noises. This witchy lady is harvesting that for future use. 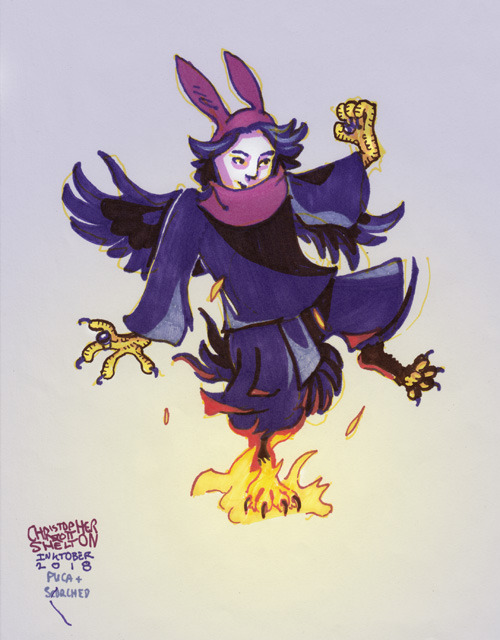 This is “Puca” + “Scorched.” I was originally going to make those standard bunny ears, but couldn’t resist a certain pop culture reference. 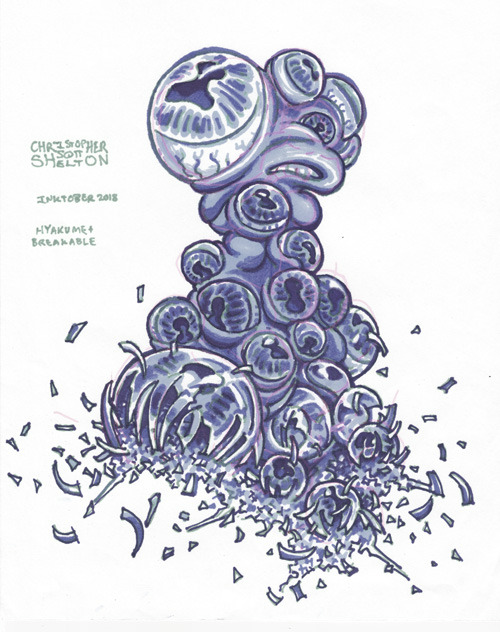 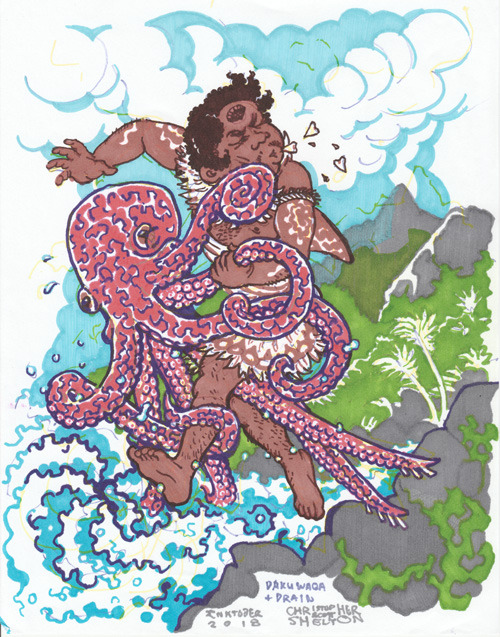 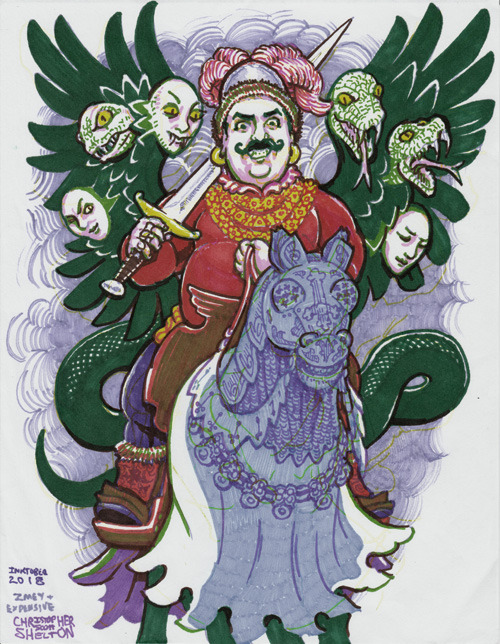 This is “Zmey” + “Expensive.” This is the only drawing that was so badly distorted in the original draft I digitally corrected it. Might still be a little off, but close enough. 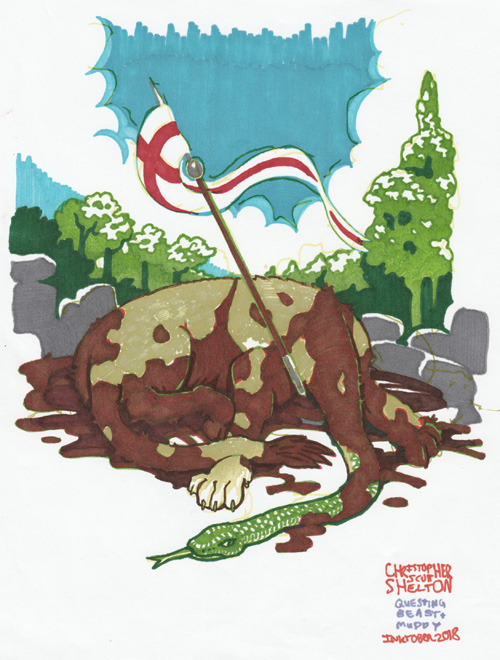 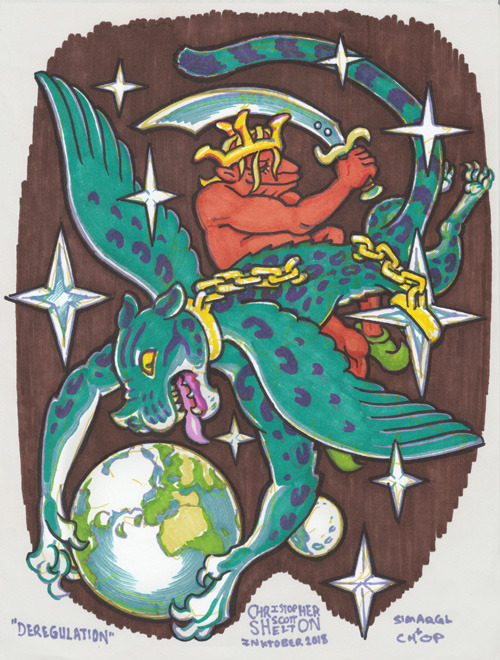 This is “Smargl” + “Chop.” This is the only one I’ve given another title to: “Deregulation.” The simargl was an apocalyptic beast chained to a star. My meaning, beyond that, is obvious enough. 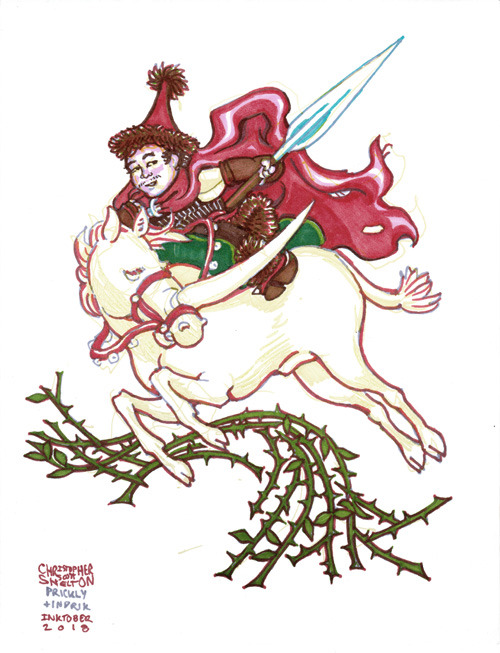 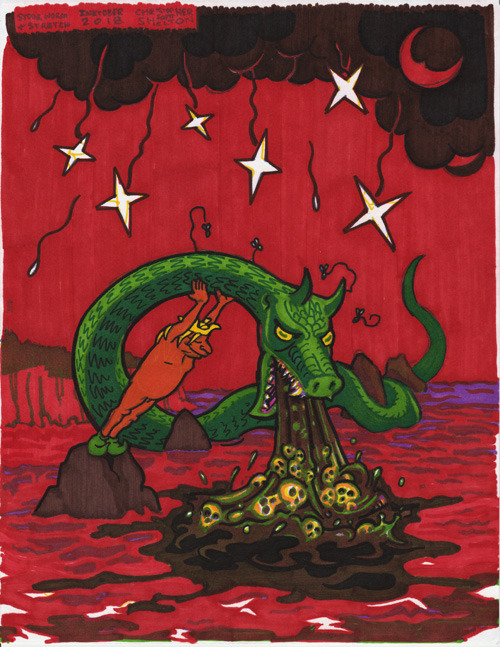 This is “Stoor Worm” + “Stretch.” The stoor worm is yet another apocalyptic beast, this time one that exudes poison. For some reason, thinking about the apocalypse makes me think about a shitty orange troll. 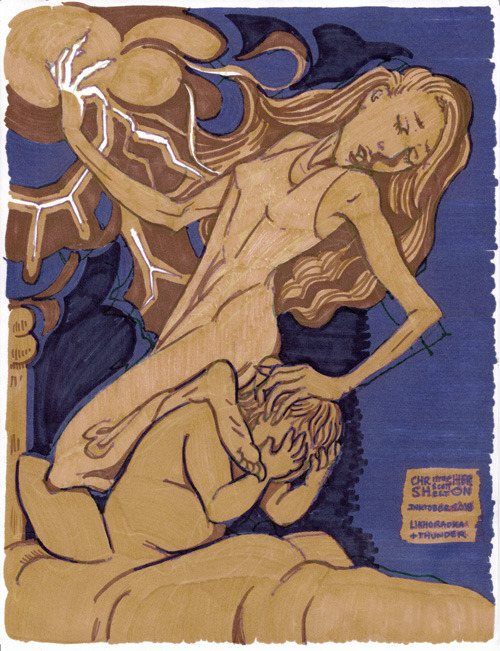 This is “Likhoradka” + “Thunder.” The likhoradka bring disease and fevers, and I’d imagine headaches. That’s what this represents. 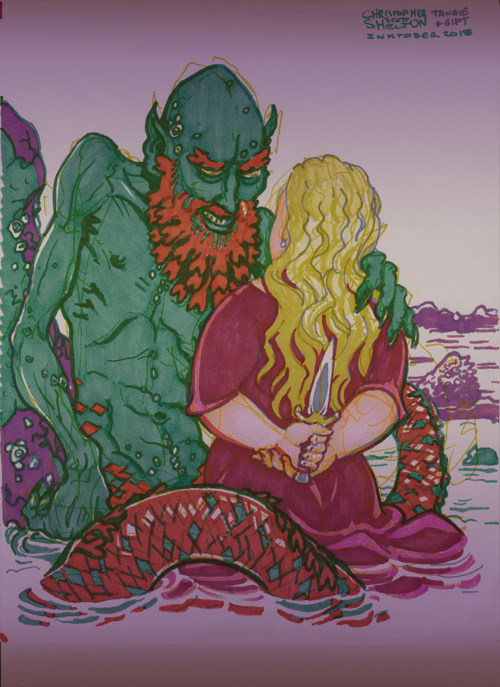 This is “Tangie” + “Gift.” The tangie was an unwholesome merman that preyed on an island. This village lady has something for his punk ass. 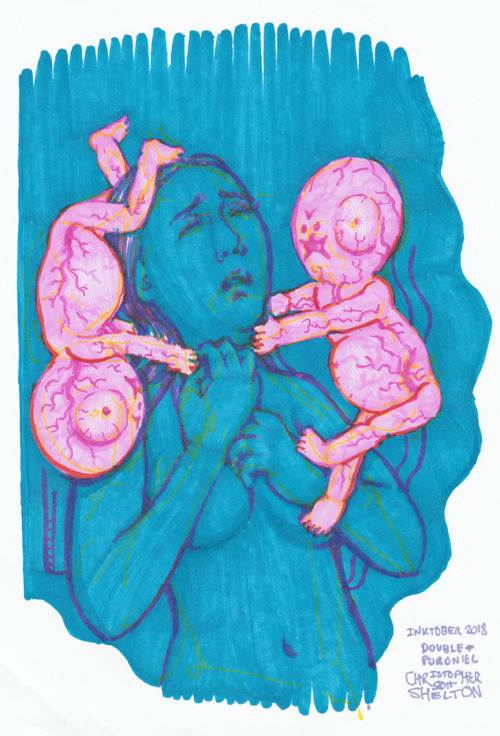 This is “Poroniec” + “Double.” I wonder if I should have made this an image of Team Rocket deploying an embryo demon against Pikachu. This is “Wulver” + “Jolt.” I await the anglers in the comments telling me how much I fucked up the technical side of this art. 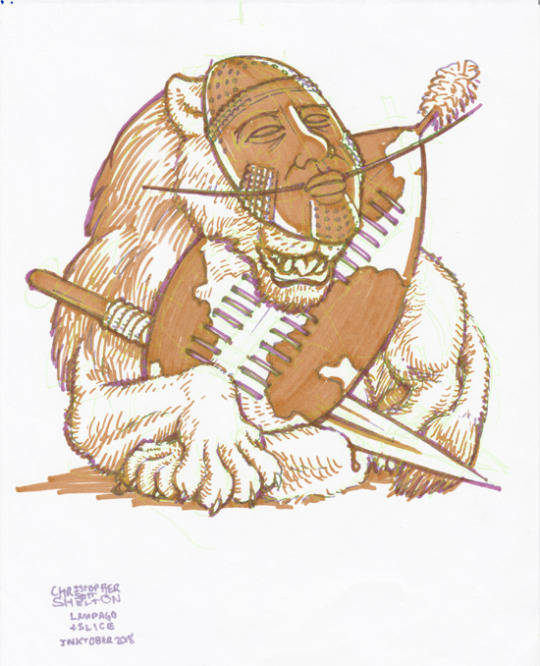 This is “Lampago” + “Slice.” Fuck this one for getting Electric Six’s “Slices of You“ stuck in my head.

The lampago is a European monster concept, but as lions are extinct in Europe, maybe the only lampagos left could be from further south.