It has become a sort of pop-psychology truism that people who engage in prejudicial behaviour are doing so from a place of insecurity. It makes intuitive sense that if you don’t feel good about yourself, you can bring yourself up by tearing others down. Indeed, there is some evidence that threats to self-concept are likely to result in a preference bias toward the majority group (even among minority group members).

In a study by Ashton-James and Tracy, the authors propose a new hypothesis. They refer to the psychological literature that suggests that pride has two basic forms: hubristic and authentic. Hubristic pride refers to the kind of pride that is directed at one’s innate self-worth and deservedness – a kind of self-congratulatory, self-centred pride that is associated with narcissism and defensive self-esteem. Authentic pride, on the other hand, refers to pride taken in one’s accomplishments based on hard work rather than, for lack of a better term, special snowflakeness – it is associated with secure self-esteem.

The authors posit that hubristic pride will lead to increased prejudicial attitudes and behaviours, whereas authentic pride will lead to more compassionate attitudes and behaviours. They arrive at this hypothesis based on literature that suggests a relationship between self-esteem insecurity and prejudice. They go on to suggest that empathic concern is the mechanism by which this relationship manifests itself, since people who are more secure in their self-esteem are more likely to be able to be outwardly focussed and respond to the needs of others.

In order to test this hypothesis, the authors conducted three experiments, as well as a pilot study.

The first question to answer is whether or not there is an association between prejudicial attitudes and hubristic vs. authentic pride. To test this, the authors had 2,200 undergraduate students fill out the Modern Racism Scale, and the trait version of the Authentic and Hubristic Pride Scale (AHPS). Correlation statistics were calculated, and hte authors found a statistically significant low-moderate association between hubristic pride and racist attitudes toward black people.

Of course we know that correlation and causation are related but not synonymous. It’s possible (indeed, plausible) that people who are predisposed to racist beliefs feel more proud of their own race as a result. An experimental observation was needed.

In the first experiment, 138 white students completed a task designed to moderate their levels of either hubristic or authentic pride. A ‘control’ group completed a task that did not moderate their levels. The level of modification was evaluated using the AHPS. Participants were then asked to judge the proportion of either the white or Asian population of Canada that was adequately described according to 4 traits (2 positive, 2 negative). Prejudice was defined as the difference between the means of the positive traits – people were not willing, in either group, to assign negative traits differentially between groups. 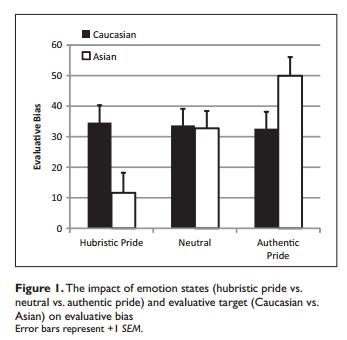 The results of the experiment suggest that, as hubristic pride is increased, so too is the likelihood to have preferential prejudices toward one’s own racial group (or against another group). Interestingly, while the control group reported roughly equivalent evaluations of both groups, people expressing higher levels of authentic pride responded more favourably to members of an outgroup, suggesting that authentic pride makes you more outwardly prosocial.

In the second experiment, 83 participants were again conditioned to exhibit either hubristic or authentic pride, and were then asked to assign a financial penalty to someone charged with committing a crime. The crime was identical except for the gender of the alleged criminal, making the crime either heterosexual or homosexual (the crime was sex in the men’s bathroom). 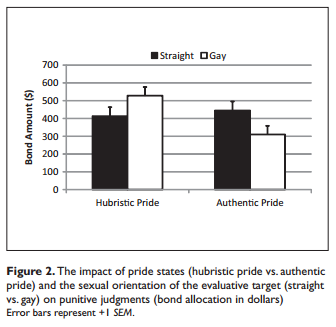 Again, we can see the difference between hubristically and authetically proud people – hubristic pride motivated a greater penalty to be waged against the gay defendant, while authentic pride lowered the penalty. The penalty was equal for both the straight defendants. What is interesting here is that the authors did not seem to measure the sexuality of the participants, or their levels of anti-gay antipathy. While randomization is done for the purpose of ensuring that these factors will be equal between the two groups, with a sample size this small, it may be a mistake to assume successful randomization for all relevant factors.

The third experiment attempted to demonstrate a plausible psychological mechanism for this effect. The authors suspected that authentic pride is associated with empathic concern for others. As mentioned above, as people’s self-esteem becomes more stable, they are able to become less self-centred, and become more aware of the needs of others. 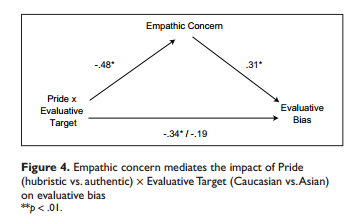 What these findings suggest is that it is not pride per se that affects the evaluation of in-groups vs. out-groups, but that authentic pride motivates someone to be more concerned for others, which then leads them to have more favourable views of out-groups than their own group.

I would be remiss if I didn’t point out the weaknesses in this study, some of which I have presented as caveats below. First off, these are single experiments, with relative small numbers, performed on undergraduate students in the USA and Canada – we have to be conservative in the extent to which we can draw global conclusions.

Second, I am not at all confident about the use of Asian people as a stigmatized group in this context – not that Asian people are not stigmatized, but the reality is far more complicated (particularly in the context of a Canadian university that I assume to be UBC) than a simple ‘positive/negative’ axis. The authors do not seem to have measured whether or not there is a detectable stigma against Asian people in the study population, they simple assert its existence. This seems to be to be a critical flaw in their design.

Third, I am not confident about their description of the crime in the second experiment. They cannot, for example, determine that their target is stigmatized because he is gay, since they are manipulating sex, not sexuality, in the task. They simply assume that the study participants are evaluating a gay man, and do not check this assumption. Again, this seems like a potentially serious flaw.

Fourth, I am surprised that the authentic pride group expressed differential levels of outgroup preference while the control group did not (see Figure 1). I do not know why authentic pride would make someone prefer an out-group, rather than advocate for equality. It may be the case that the authentic pride group is a reflection of a positive bias toward Asian people that is counteracted by an equally negative bias in the control group (and overpowered in the hubristic group), but because no attempt was made to measure stigma about Asian people, it is not possible to know

Despite these flaws, this paper is attractive for a number of reasons. First, the description of authentic vs. hubristic pride made me laugh as I considered some of the people I run into in online debates about racism (or, to be honest, a lot of topics). Any supremacist group that believes it is intrinstically superior to another may be doing so out of psychological insecurity. It is not an accident, therefore, that these groups exhibit little compassion, or in some cases antipathy, toward outgroups.

Second, it prescribes a specific remedy for getting people to demonstrate externally pro-social attitudes: shore up their levels of authentic pride. Focus praise on what a group has accomplished, rather than its moral or intellectual superiority. By boosting authentic pride (hopefully at the expense of hubristic pride), we can potentially increase empathic concern. Any group that is looking to make its mission one that is focussed on serving others, and which wishes to combat prejudice, should pay attention to these findings.

Whatever the answers to these question, it may be the case that we can use these findings within the secular community. We know, for example, that misogynistic prejudice (and, to a somewhat lesser extent, racist prejudice) is a serious concern. I know that, to my admittedly biased eye, I recognized a lot of atheists in the description of behaviours typical of hubristic pride (arrogance, superiority, narcissism, defensive self-esteem), particularly among those who are strong opponents of making changes to combat inequality (although I am sure they’d make the same accusation about me). The question becomes whether or not we can use the knowledge of the difference between authentic and hubristic pride to promote more positive messaging within the community (e.g., “we are atheists because we grappled with difficult questions and developed good techniques” rather than “we are atheists because we’re smart and religious people are stupid”), and whether that would have a positive effect on our levels of prosocial interaction in other areas.

In any case, I enjoyed this study a lot, and it has given me quite a bit to think about.