I don’t usually like bringing up especially personal stuff here, but I just couldn’t resist blogging this. For reasons I don’t care to explain at the moment, I made an appointment with UW’s mental health clinic. While you can request a referral online, you still need to do a phone screening before you can go in. Basically they need to know what you need help with (eating disorder? depression? substance abuse?) and how severe your problem is (stressed out graduate student, or ready to jump off the George Washington Memorial Bridge?).

Don’t worry, I’m not in the latter.

I decided to Google the name of my screener before calling. I’m not sure why – maybe I thought seeing a smiling photo attached to a name would calm some of my nerves. But the opposite happened when I read her bio:

[Screener]*, M.Ac. has worked in the field of crisis intervention, with a specialization in suicide prevention, since 1993. She earned her master’s degree in acupuncture from Northwest Institute of Acupuncture and Oriental Medicine in 2002, and has completed her certification as a yoga instructor (RYT ® Yoga Alliance, 200 hours). Integrating an understanding of Traditional Chinese Medicine and Yoga with training in mental health issues, [Screener] offers a holistic and culturally sensitive approach to crisis intervention. [Screener] is a certified counselor in the state of Washington.

My reaction was pretty much exactly this: 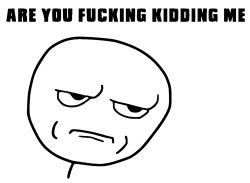 I guess I shouldn’t be surprised. I was well aware that the graduate student appointee insurance covers acupuncture. It’s just a little unsettling when you’re trying to cure your own crazy, and you find out you’re going to be talking to someone who graduated from woo-woo university. Maybe this is culturally insensitive of me, but I don’t want Traditional Chinese Medicine – I want Proven Scientifically to Work Medicine.

After a little more digging, I realized 5 out of 14 of the clinic’s staff mention using spirituality or Buddhist teachings in their therapy. I’m not sure if this ratio is good or bad for a public university. I understand that there are religious students on this campus who could benefit from this…but it makes me a little unnerved. I was already uncomfortable about going in – I don’t want someone who’s not going to understand where I’m coming from.

I wonder how I can say “I am a raging atheist, please give me someone whose treatments are based on rationality” without getting that marked down as a symptom.

*Yes, I realize it’s very easy to figure out who this person is. I just don’t want people to find this post when searching for her name…or for her to get a Google Alert when I’m going to have to deal with her. I will remove comments that post her name.

I have one last bribe » « Know any student atheist activists?