One of the consequences of having a great deal of math and physics education, is that whenever I learn about something, I internally encode it as math, even if nobody else is thinking of it that way. Today I’m going to share one of the more ridiculous examples, the analogy between identity labels and topology.

I’m mainly thinking about sexual identity labels, and especially arguments over boundaries of those labels. I’m thinking of how people claim “everyone is a little bisexual”; or they argue about the validity of bisexual lesbians; or they ask “isn’t demisexuality just normal?”; or they draw sharp distinctions between asexual, gray-asexual, and allosexual.

In all these arguments, there is the essentialist viewpoint, which says that everyone has an underlying sexuality, and each word covers (or should cover) a specific space of sexualities. If your underlying sexuality falls within the domain of the identity label you use, then your label is “correct”, and if it doesn’t, then your label is “incorrect”.

I disagree with the essentialist viewpoint, and I frequently point to prototype theory, family resemblance theory, and Wittgenstein as alternatives. But I also feel that if you’re going to take the essentialist viewpoint, obviously you should take it all the way, and learn about the math that you’re implicitly using. I am not going to “prove” that essentialism is wrong, and if you summarize my essay as “Mathematics disproves essentialism” then so help me, you did not read the fourth paragraph. The goal is to explore the implicit mathematical framework of essentialism, and point out its unaesthetic aspects.

Of course, I don’t recommend actually using this in an argument, since it relies on teaching people math.

The sexual spectrum is a topological space

What is topology? You might be familiar with topology as the field of math that explains how coffee cups are equivalent to donuts, because you can continuously deform one shape into the other. But it’s not all coffee cups and donuts, there’s actually a lot of underlying math, which I had the pleasure to learn in a college course over a decade ago. Completely useless, of course–until now!

Topology is a way of thinking about spaces, or sets of points, without having any way to define “distance”. For example, many people speak of a sexual spectrum, a space of possible sexual orientations. One of the simplest models of the sexuality spectrum is the Kinsey scale, which assigns people numbers between 0 and 6. When the Kinsey scale uses numbers, it implicitly defines a distance between sexualities; for example, the distance between a 0 and 1 on the scale is equal to the distance between a 3 and a 4. But are those distances actually the same? What does “distance” even mean here? It doesn’t mean anything, because the applicable mathematical framework is topology.

The field of topology primarily deals with mathematical objects known as topological spaces, or (confusingly enough) topologies. A topological space is defined as a set of points, along with the set of all “open” sets among those points. You don’t need to understand this, but you do need to understand is that this allows for a notion of connectedness. For example, within the Kinsey scale, we understand that if you want to define a set which connects 0 to 6, then this set must also include 3. If we created a set that included 0 and 6, but which did not include 3, then this set must be disconnected, meaning that it can be separated into two or more pieces that don’t touch each other.

Relevant to my interests, Kinsey also included another category in his model, known as “X”. This refers to people with “no socio-sexual contacts or reactions”. Now the interesting thing about this X category, is that it causes the sexuality spectrum to be disconnected. We can separate the spectrum into two pieces that don’t touch each other: 0-6, and X. This is not aesthetic. Many people prefer a framework where the sexual spectrum is fully connected, which is why we have things like the Storms model.

This way of dividing the spectrum into subsets can be mathematically described as a partition. A partition has two requirements. First, each of the subsets must all be disjoint meaning there’s no overlap between them. Second, the subsets must cover the topological space, meaning that every point in the sexual spectrum is part of at least one of the subsets. It is certainly possible to define subsets of the sexual spectrum that aren’t disjoint, or which don’t cover the spectrum; however, it would no longer qualify as a partition. One way of thinking about essentialist ideology, is that it’s a desire for a clear partition.

If I may digress away from the sexual spectrum for a moment, let’s talk about the futch scale. It’s a meme about the butch-to-femme spectrum, and not meant to be taken seriously. But what I find interesting is how it implicitly depicts (or parodies?) the essentialist viewpoint. The futch scale depicts a spectrum from 1 to 10, and this spectrum is divided into 7 identities. The different identities are disjoint, and they fully cover the spectrum, so it’s a partition. 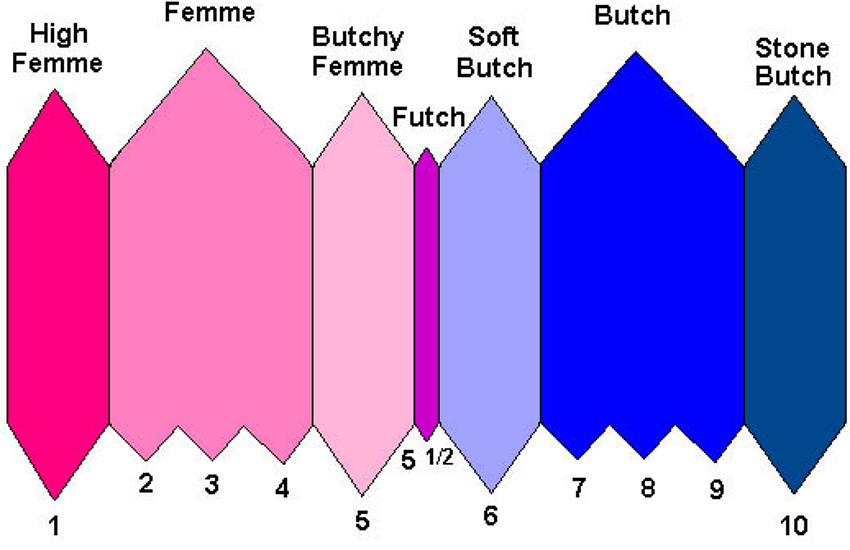 And isn’t it strange that it’s a partition? Consider that the people who invented “soft butch” are entirely different people from those who invented “butchy femme”, and they may not have even known about each other. So it’s amazing that they coordinated to define sets that are perfectly symmetric to each other, with exactly enough space between them so that “futch”–another term that was surely created independently–can snuggle up in there. with no overlaps or gaps.

The point is, having a partition is a strange state of affairs that could only happen if you specifically designed it that way, as essentialists want to do. It leads to a rigid and brittle framework where…

By the definition of “connected”, we can infer that sexual identities cannot all be open sets. I… am still not going to define an “open set”, y’all can read Wikipedia if you want to hear about it. Let me explain through an example.

Going back to the Kinsey Scale, suppose the dividing line between bisexual and lesbian is at exactly 5. 5 is the boundary between the two sexual identities, and we’re forced to place 5 in either the bisexual or the lesbian category. As far as topology is concerned, the choice is significant, because the two choices are topologically distinct. The joke goes that a topologist can’t tell the difference between a coffee cup and a donut, but they certainly can tell the difference when you choose which way the 5 goes.

But as far as the real world goes, it doesn’t really matter. There are a finite number of people in the world and probably nobody is exactly a 5, so the question of which way the 5 goes is purely theoretical.

Of course, some essentialists would say that putting the dividing line at 5 seems quite arbitrary, and we should really just put it at 6. If you’re exactly a 6, then you’re a lesbian, and if you’re even a little bit off then you’re bisexual. But then, we just argued that probably nobody is exactly a 5, and perhaps nobody is exactly a 6 either. So we’ve finally arrived at “everyone is bisexual”, our dear frenemy. Thanks, essentialism!

Here’s a thought. We could discard conventional sexual orientation labels, and identify by whether our sexual orientations are open sets, closed sets, neither, or both! My sexuality is clopen, hooray. (Sorry it would take me ten minutes just to explain this joke, and we’re already so deep into “not explaining things” territory.)

Far be it for me to offer advice to essentialists, but it occurs to me that it would make more sense if you just relaxed one of the assumptions. Consider the possibility: each sexual identity is a subset of the sexual spectrum, but they are not necessarily a partition. Let’s call this stance “non-partition essentialism”.

Let’s think through an example situation using non-partition essentialism. Imagine that we start with just the labels “straight” and “gay”. These each refer to specific areas on the sexual spectrum. However, there’s a gap between them, where people would neither be gay nor straight. So we add another set, “bisexual”. At this point we’re tired of people falling in the gaps, so we decide that there should be no gap between bisexual and straight/gay. But we can’t precisely place the boundaries, so instead of a gap between each category, we have a bit of overlap. So now some people fit both bisexual and gay, and I suppose those people might choose one label, or the other, or both.

Non-partition essentialism has some merit, even I have to admit. It has the nice property that you don’t need the ability to precisely place boundaries, because overlap or gaps between categories are acceptable. You don’t have to renegotiate boundaries every time a new label is created. It acknowledges the possibility that there are genuine gaps between sexuality labels, which you may fill with a new identity label, or just leave blank if you’re so inclined. And you can have two or more labels at once, if you’re up to it.

However, it’s still kinda essentialist, because we’re still thinking of everyone as having an underlying sexuality which definitely fits or does not fit each sexual identity label. I feel like this just doesn’t describe how real boundaries work. They’re fuzzy, they’re negotiated through arguments, they shift depending on context, they are the collective result of millions of people each drawing (or not drawing) their own boundaries, based on entirely different frameworks. Essentialism seems to describe not reality, but describe some ideal world where everyone thinks exactly the same way.

I do not think the sexual spectrum is a topological space (although that’s a useful way to think about common models), nor do sexual identities constitute subsets of that space. The world is made of atoms and stories; sexual identities are the latter.