I dabble in many kinds of origami, especially in the context of interacting with origami groups.  I created this model, because someone at the origami group was really excited about making Pokemon, and asked if anyone could help him with this one.  It was difficult because we didn’t know the folding steps, we only had a crease pattern.

As you can imagine, folding this without further instructions is a bit difficult.  But we put our heads together and managed to make something passable.  There were three of us working on it, and each of us brought experience with one of the three basic steps.  The first step is to pre-crease along all those lines indicated in the diagram above (the step I was good at).  The second step is to collapse the model into a base, which will have appendages of all the right lengths, but won’t look like a Pokemon yet.  The third step is to mold the model, shaping it and adding frills until it looks right.

Of course, since it was just my first attempt, and we were muddling through it, I wouldn’t say that it’s a very good Skarmory.  We certainly glossed over a few of the components–I didn’t bother trying to make clawed feet.  For an example of a good Skarmory, look here and scroll down.

And for the record, I’m not actually familiar with any of these Pokemon.  Back in my day we only had 151 Pokemon, and Skarmory certainly wasn’t among them.  When we set to work on Skarmory, I briefly looked up an image so I could choose the right color of origami paper.  Reddish brown seemed like the correct choice. 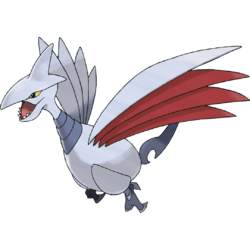